Members of the local Serbian community members hold a banner outside the legal offices where Serbia’s tennis champion Novak Djokovic is in with his legal team in Melbourne on January 9, 2022.
William WEST / AFP

Serbians applauded Novak Djokovic’s win Monday over the Australian government, overturning the cancellation of his visa on Covid-19 and thus ending his detention by authorities.

“To the delight of all those who went out into the streets, who in all corners of the world offered their support Novak Djokovic won in Australia, as he always does,” read an editorial in the Serbian daily Blic.

The tabloid Vecernje novosti announced Djokovic “beat Australia”, while warning that “nothing is over”.

The tennis star’s legal victory was also welcomed by residents of the capital Belgrade, where hundreds rallied during the past week in support of their compatriot to whom Serbian President Aleksandar Vucic pledged full diplomatic backing. 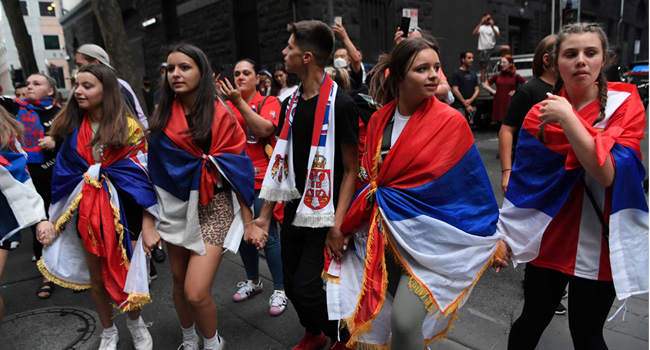 Members of the local Serbian community play music and dance outside the legal offices where Serbia’s tennis champion Novak Djokovic is in with his legal team in Melbourne on January 9, 2022.
William WEST / AFP

Others remained anxious that Australian authorities would make one last effort to expel Djokovic ahead of the Australian Open.

Despite losing in court the Australian government has warned it could still force Djokovic to leave by cancelling his visa for a second time, which would see the Serb miss the tournament, starting on January 17.

“If they deport him, despite the court’s decision, it will be a scandal beyond measure,” said Bozidar Popovic, a 34-year-old economist in Belgrade.

“It’s unimaginable that they are going after a sportsman of this rank,” added Jelena Jovic, 47, a bank employee.

Little has been said about the revelation that Djokovic had tested positive for Covid-19 for a second time in December and was later seen attending public events maskless.

According to documents released by Australian authorities, Djokovic tested positive on the evening of December 16.

It remains unclear when exactly Djokovic was notified of the positive test, but individuals are usually informed of their results within hours by labs in Belgrade.

Pictures shared by the Belgrade tennis federation later showed him at a young players’ event in the city on December 17.