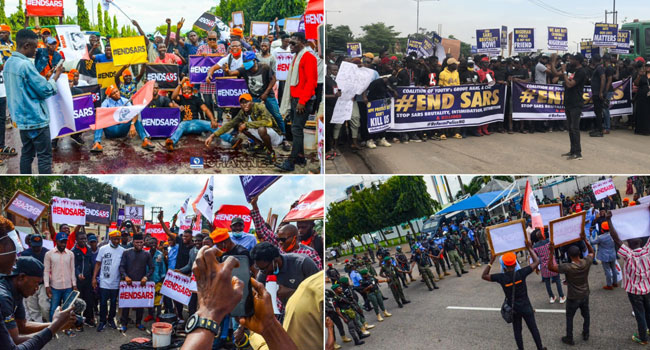 Socio-Economic Rights and Accountability Project (SERAP) has sent an Urgent Appeal to Rt Hon Patricia Scotland QC, Secretary-General of the Commonwealth, urging her to use her “leadership position to apply the Commonwealth Charter to hold Nigerian authorities to account for widespread and persistent attacks on peaceful protesters, reports of human rights violations and abuses, corruption, impunity, as well as disregard for the rule of law.”

The organization asked Ms. Scotland to “urgently consider recommending the suspension of Nigeria from the Commonwealth to the Heads of Government, the Commonwealth Chair-in-office, and Her Majesty Queen Elizabeth II, as Head of the Commonwealth, to push the government to respect the Commonwealth’s values of human rights, transparency, accountability and the rule of law.”

In the Urgent Appeal dated 10 October 2020 and signed by SERAP deputy director Kolawole Oluwadare, the organization said: “Such action by the Commonwealth will be commensurate with the gravity of the human rights situation in the country. A government that attacks its own citizens for peaceful protests severely undermines its credibility as a democratic regime that respects human rights and the rule of law.”

According to SERAP, “Respect for Commonwealth values is essential for citizens to trust Commonwealth institutions. The Commonwealth ought to make clear that respect for human rights, transparency, and the rule of law is fundamental to the integrity, functioning, and effectiveness of its institutions.”

SERAP said: “Persistent attacks on protesters have severely constrained the ability of the people to participate in their own government and to hold authorities and public officials to account for alleged corruption, and human rights violations and abuses, thereby causing serious hardships for ordinary Nigerians and undermining their rights, livelihood, and dignity.”

The letter, read in part: “The ongoing events in Nigeria demonstrate the authorities’ determination to suppress all forms of peaceful dissent and freedom of expression of the Nigerian people. There are well-founded fears that the human rights situation in Nigeria will deteriorate even further if urgent action is not taken to address it.”

“These protests are taking place against a backdrop of the failure by the Nigerian government to address persistent concerns around police brutality and impunity, corruption, lack of respect for economic and social rights of the people, and disregard for the rule of law.

“The result has been a crisis of daily electricity outages, a struggling public education and health system, lack of access to clean water, and widespread youth unemployment.”

“Lack of transparency and accountability, and the absence of the rule of law in Nigeria have resulted in a growing level of protest activity, and an unprecedented brutal crackdown on human rights by the authorities.”

“People have been targeted simply for exercising their fundamental freedoms including their rights to freedom of peaceful assembly and expression to end police brutality and impunity. SERAP is concerned about a significant deterioration in the human rights situation in the country since the assumption of office by the government of President Muhammadu Buhari in May 2015.”

“Nigerian authorities have since 2015 promised to address police brutality and impunity but have repeatedly failed to do so. Authorities would seem to be suppressing protests to punish and intimidate people campaigning for an end to police corruption and brutality, grand corruption and impunity, human rights abuses, and disregard for the rule of law.”

“Allowing citizens to freely exercise their human rights including to freedom of expression and peaceful protest without the threat of reprisal or attack would enable them to contribute to society on issues of transparency, accountability, good governance, integrity, and human rights.”

“The Commonwealth Charter recognises the inalienable right of individuals to participate in democratic processes, in particular through peaceful protests and freedom of expression in shaping the society in which they live and for these rights to be protected and respected.”

“Similarly, Nigeria has responsibility under the Nigerian Constitution of 1999 [as amended] and international human rights treaties to which the country is a state party to protect peaceful protesters and ensure a safe and enabling environment for people to exercise their freedom of expression and peaceful assembly.”

“According to our information, the Nigerian government has continued to crackdown on peaceful protesters, including #EndSARS protesters, who are campaigning against police brutality, corruption, and impunity.”

“The authorities are committing other ongoing, widespread violations of human rights, including arbitrary arrests, torture and other ill-treatment and killings in response to the exercise by the people of their rights to freedom of expression and peaceful assembly.”

“Amnesty International’s reports show disturbing cases of attacks on #EndSARS protesters. Jimoh Isiaq, a protester, was killed by the Special Anti-Robbery Squad (SARS) operatives of the Nigeria Police in Ogbomoso. Tiamiyu Kazeem, a footballer was also killed in Sagamu by the police.

“These are just a few examples of the many human rights violations and abuses committed by the Nigerian police and security agents. According to Amnesty International, the ‘SARS detention centre in Abuja was previously a butcher’s yard and is commonly known as the abattoir. Some suspects detained in abattoir rarely come out alive.’”

“Nigeria police and security agents routinely respond to peaceful protests with disproportionate use of force, including using live ammunition, resulting in injuries to many individuals and deaths. Journalists covering protests have been targeted, some of whom have been beaten simply for performing their professional duty.”

SERAP, therefore, urged the Commonwealth to:

Establish a mechanism to visit Nigeria to monitor and report on human rights violations and abuses, absence of transparency and accountability, and persistent disregard for the rule of law, and to get to the root of the facts and circumstances of such abuses, with a view to ensuring full accountability;

Publicly condemn reports of human rights abuses, absence of transparency and accountability, and put pressure on the government to take preventive measures to end impunity in the context of its response to peaceful protests, including #EndSARS protests;

Urge Nigerian authorities to fully and adequately protect protesters from violent attacks by Nigeria police and security agents, and to ensure the safety of journalists and media workers observing, monitoring, and recording protests;

Urge Nigerian authorities to take measures to address the root causes of protests and longstanding injustices and socio-economic grievances that have driven people to the streets to protest;

Urge Nigerian authorities to immediately and unconditionally release anyone arrested in relation to #EndSARS protests and other peaceful protests, to promptly investigate all allegations of violations and abuses against protesters, and to bring suspected perpetrators to justice, as well as ensure access to justice and redress for victims;

Urge Nigerian authorities to ensure that people can enjoy their human rights without discrimination and to take all possible measures, including by cutting the costs of governance particularly the proposed spending in the 2021 budget of: N9.2 billion to renovate the National Assembly complex; N12.5 billion to maintain the Presidential fleet; N2.3 billion to pay entitlements of ex-heads of state, presidents, vice-presidents, and N500 million to buy cars for them. This is consistent with the government’s obligation to prevent corruption and misuse of resources.