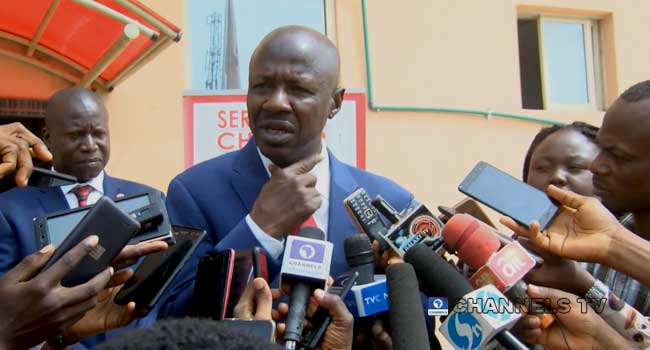 The Socio-Economic Rights and Accountability Project (SERAP) has expressed “concerns about reports that the apparently arbitrary arrest of the acting chairman of the Economic and Financial Crimes Commission (EFCC), Ibrahim Magu, may be ‘the outcome of power-play’ at the highest levels of government.”

In a statement issued on Tuesday by the Deputy Director of the agency, Kolawole Oluwadare, the organisation said: “The reported statement by a member of PACAC seems to suggest that Magu’s arrest may be politically motivated and aim to undermine the independence and freedom of action of the EFCC. If true, this would make a mockery of Buhari’s oft-repeated commitment to fight grand corruption and the impunity of perpetrators, which is fuelling widespread and systemic corruption in the country.”

“Magu must either be charged with a recognizable criminal offence or released immediately and allowed to do his job without fear of reprisals,” the statement read in part.

“Nigerian authorities cannot continue to keep Magu in detention under suspicious circumstances without bringing any legitimate charges against him in violation of national and international law.

“Nigerian authorities must support the independence and freedom of action of anti-corruption agencies and institutions if they are to be able to genuinely fight grand corruption, which has for many years turned public service for many into a kind of criminal enterprise.”

“Nigerian authorities should focus on addressing the impact of corruption such as political violence, and denial of access for millions of Nigerians to even the most basic health and education services, as well as other patterns of human rights violations.

“Improving the independence of anti-corruption agencies and institutions is the most promising way to make tangible progress in the fight against corruption now and in the near future.

“Article 9(1) of the International Covenant on Civil and Political Rights and Article 6 of the African Charter on Human and Peoples’ Rights to which Nigeria is a state party guarantee to everyone the right to liberty and security of person, and that no one should be subjected to arbitrary arrest or detention.

“Similarly, Section 35(1) of the Nigerian Constitution of 1999 (as amended) guarantees to every person the right to personal liberty and that no person should be arbitrarily deprived of such liberty.”