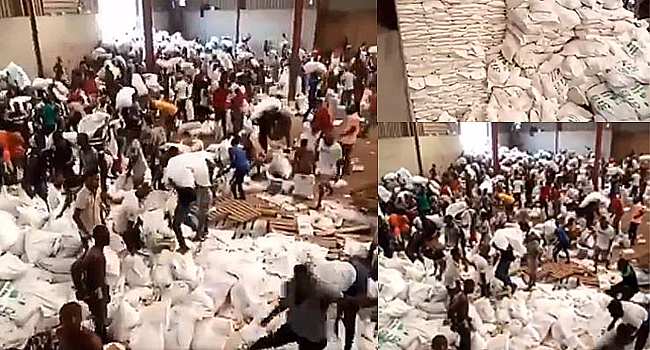 Scores of Lagosians have broken into a warehouse in the Amuwo area of Lagos State where COVID-19 palliatives were being stored.

Viral videos on social media on Thursday showed people packing out bags and cartons of the palliatives which were ought to have been shared by government to cushion the negative impact of the COVID-19 pandemic on the economy.

Also spotted in one of the videos, was a van belonging to a joint Internal Security Operational platform, OP MESA, with people loading the vehicle with the palliatives.

In a swift reaction, the state government has, however, debunked reports that the palliatives had been stored in there for months.

Chief Press Secretary to Governor Sanwo-Olu, Gboyega Akosile, in a tweet described the comments as ‘falsehood and inciting’.

“The government didn’t lock the food packs in. They’re in warehouse for distribution,” he said.

According to him, the governor only received the palliatives on September 22, less than a month ago.

Akosile further explained that Governor Sanwo-Olu had used his personal and state resources to get food palliatives for vulnerable Lagosians even before the contributions from the Coalition Against COVID (CA-COVID).

This is falsehood. This is inciting. The Gov didn’t lock the food packs in. They’re in warehouse for distribution. Stop inciting Nigerians. Gov. @jidesanwoolu used his personal and State resources to get food palliative for vulnerable Lagosians even b4 Ca-COVID. Promote peace. https://t.co/bk3d8b8zIR

#NIGERIAPREVAILS our leaders are heartless and got no conscience, covid 19 palliatives meant for masses been stored for months pic.twitter.com/sqkOFwzyGn

what did You keep these COVID-19 palliatives for while People died starving then?! this is just pure wickedness! 😡#NIGERIAPREVAILS #Buhariisdead #CongoIsBleeding

This is coming amid the chaos, series of destruction and looting that has occurred in many areas of the state.

Major malls, shops, businesses and even vehicles have been burnt down – part of an aftermath of shootings that occurred on Tuesday at the Lekki Toll Gate area of the state.

Peaceful protesters had gathered despite a curfew imposed to end spiralling protests over police brutality and deep-rooted social grievances.

At the Lekki Toll Gate which has been one of the major converging points, peaceful and unarmed protesters, however, defied the curfew and stayed put, hours after it was to have commenced.

The situation took a turn for the worse around 7:00 pm when the security operatives stormed the area and started shooting sporadically.

“It wasn’t to drive us away, it was to kills us,” one of the protesters who said he saw the armed soldiers, told Newspot.

According to Amnesty International, at least 12 people were killed in the deadly shooting.