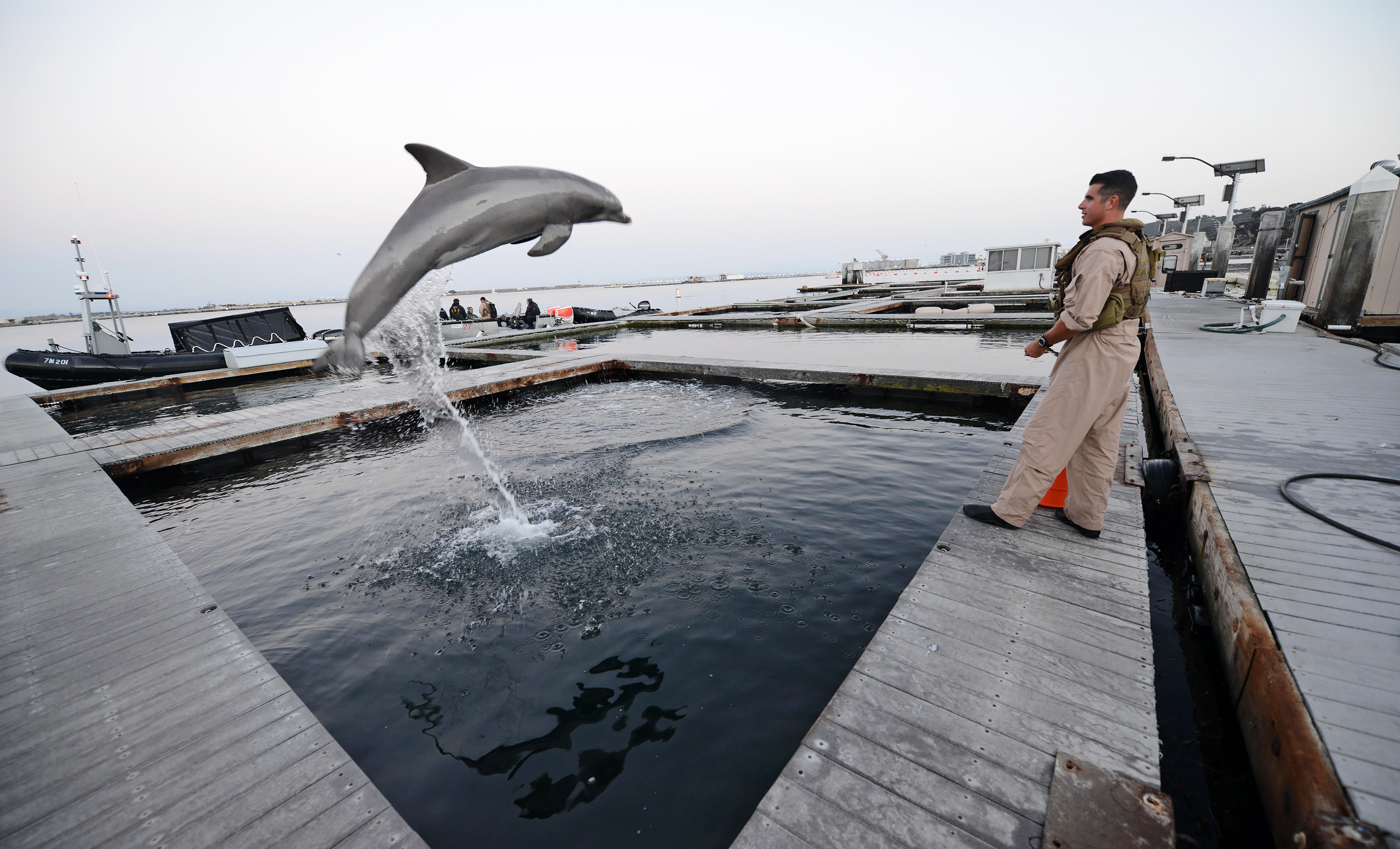 The United States Naval Institute reports on a variety of military topics, including the movements of ships, weapons and dolphins. That last one isn’t a code name for a new type of weapons system: The USNI has just reported that the Russian navy is using real dolphins to protect naval ships in the Black Sea harbor of Sevastopol.

Employing guard dolphins seems like something a wacky James Bond villain would do. But using animals for military purposes has a history that goes back thousands of years and is more common than you might expect. It can sound bizarre, but this little-known aspect of military operations can actually be a smart way to protect the lives of service members.

While military innovations have largely made elephants, horses and pigeons obsolete on the battlefield, there are still some things animals can do better than people or robots.

Like the Russians, the U.S. military uses dolphins and other animals in its activities. Dogs sniff out explosives and drugs, mules carried equipment in Afghanistan, and in the 1980s, territorial, honking “goose guards” protected U.S. military installations in West Germany from Cold War intruders.

Since humanity began to domesticate animals about 15,000 years ago, we’ve used them for a wide variety of purposes, including war. We’re used to hearing about them in history class, like when the Carthaginian general Hannibal led an army and 37 war elephants across the Alps to attack Rome more than 2,000 years ago. Elephants were used for battle in Asia and Africa for millennia, known for wreaking havoc on enemy lines and sometimes even their own.

Horses were more widespread in war than elephants, both as cavalry and as a way to transport supplies. We associate soldiers on horseback with medieval knights or the American Indian Wars, but cavalry were used well into the 20th century, with both Allied and Axis forces making a few cavalry charges in World War II (with lackluster results).

Prior to the widespread use of wireless technology, animals like pigeons were often used to carry messages of vital military importance. Pigeons saved countless lives in both world wars, from one that flew 120 miles to alert rescue personnel of a downed bomber to another that pre-emptively stopped the mistaken bombing of a village recaptured by Allied forces.

In fact, 32 pigeons have even received the Dickin Medal, described by the British animal charity that awards it as “the animals’ Victoria Cross.” The most recent recipient, a German shorthaired pointer named Hertz, got his prize just this February for his keen ability to protect British and coalition forces in Afghanistan by detecting drugs and electronics. The U.S. military uses Belgian Malinois dogs for similar purposes.

While military innovations have largely made elephants, horses and pigeons obsolete on the battlefield, there are still some things animals can do better than people or robots. This brings us back to dolphins.

Dolphins are remarkably intelligent animals, and like dogs, they are able to be trained. But unlike dogs, dolphins are able to echolocate (or use reflected sound waves to find objects) and detect not only squid in dark waters but explosives hidden in shallow waters where they can be missed by electronic sonar. And unlike humans, they can dive hundreds of feet below the surface without being affected by decompression sickness.

Pigeons saved countless lives in both world wars, from one that flew 120 miles to alert rescue personnel of a downed bomber to another that pre-emptively stopped the mistaken bombing of a village recaptured by Allied forces.&nbsp;

The U.S. Navy Marine Mammal Program has been active since 1959, and after trials with several types of marine mammals (and nonmammals like sharks, sea turtles and birds), it  today uses bottlenose dolphins and California sea lions to detect underwater mines, recover equipment and even alert sailors to underwater saboteurs. Dolphins deployed in the Persian Gulf cleared mines and protected coalition ships. (And, as a side benefit, more than 1,200 scientific papers on marine mammals have been published thanks to the program.)

Not willing to cede cetacean superiority to the U.S., the Soviet Union tried to make a military marine mammal program for offensive as well as defensive actions. The Soviet program reportedly produced dolphins that were trained to attack with mounted harpoons, as well as “kamikaze dolphins” strapped with explosives that could bomb enemy ships in suicide strikes. It isn’t clear if the Soviet Union’s attack dolphins ever saw combat, but even if they did it’s unlikely they were very successful.

After the fall of the Soviet Union, part of this program was transferred to Ukraine, and the USNI reported that in the following decades it “barely stayed open,” with some reports that it closed in 2000 when the dolphins were sold to Iran, only to be resurrected in 2012. Whatever the case, when Russia unilaterally annexed the Crimean Peninsula in 2014, it also took control of the dolphins that were there. Since then, Russia has expanded its own military marine mammal program, although most of the dolphins seized from Ukraine have died, with a Ukrainian government official bizarrely claiming they died “patriotically” while on a hunger strike.

Russia’s program now includes a Black Sea dolphin unit and an Arctic program run by a Russian intelligence agency that uses seals and beluga whales, according to the USNI. One of these beluga whales was spotted by fishermen off the coast of Norway in 2019 wearing a harness suitable for a camera or a weapon.

Unlike the Soviet and Russian programs, the U.S. Navy openly states that its dolphins and sea lions are only used in a support capacity (and even offers tours of its training facility). The U.S. attempted to replace its military marine mammal program with easy-to-produce robots in 2012, but even after several years and over $90 million, it determined that dolphins are still better at finding explosives than robots.

The U.S. Navy uses dolphins and other animals for jobs that are difficult and dangerous for humans, keeping our service members safe from harm. Whether or not you find it sad that we are making animals a part of our wars, if the Navy didn’t use them, it could cost sailors their lives, and that would be far sadder.