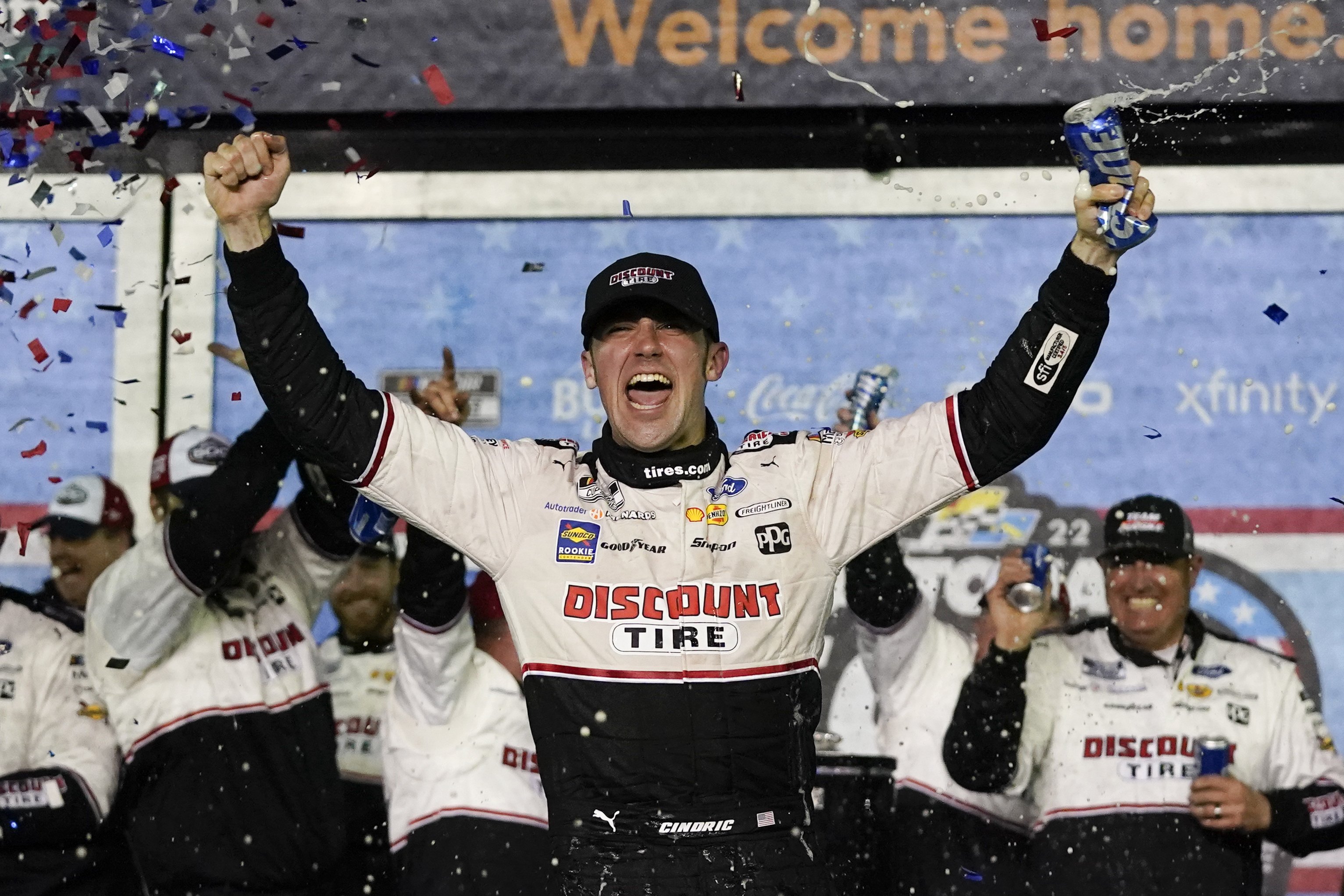 “Oh, my God. I’ve got so many people to thank,” the stunned 23-year-old  said after climbing from his car and saluting the capacity crowd of 120,000.

Cindric drove a masterful race at Daytona International Speedway. The Ford drivers synched their strategy all week, then executed flawlessly Sunday night. The blue oval drivers pushed each other over 500 miles and were bunched together for the final restart in overtime.

Cindric was the leader on the restart from the top lane and pulled out to a sizeable gap. He then ducked down to the bottom line in front of his Team Penske teammate Ryan Blaney so that Blaney and Cindric could work together over the final two-lap sprint to the finish.

Blaney on the final lap made his move for the lead, and Bubba Wallace ducked low for his own look at the front. Cindric slid up to block Blaney, but still had to hold Wallace off in a drag race.

“Appreciate Ryan being a great teammate,” Cindric said. “Obviously, he wants to win this one.”

Blaney bounced off the wall and cars began crashing around him, and Cindric was declared the winner. It was the first career Cup victory for Cindric, who was promoted from the Xfinity Series to replace Brad Keselowski in the No. 2 Ford and run for NASCAR’s rookie of the year honors.

“I know there’s going to be highs and lows, being a rookie in a field of drivers this strong,” Cindric said. “I’m just grateful for the opportunity, excited to climb the mountain we’ve got ahead of us on the 2 team. But we’re in the playoffs. That’s one good box checked.”

The win was the third Daytona 500 victory for Penske, who also picked up the trophy in 2008 with Ryan Newman and 2015 with Joey Logano. Ford Motor Co. has won the Daytona 500 17 times, including two in a row.

Wallace finished second for the second time in his career in the Daytona 500.

“What could have been, right?” Wallace said. “Just dejected.”

A trio of Ford drivers rounded out the top five with Chase Briscoe third, followed by Blaney and Aric Almirola.

Kyle Busch was sixth to join Wallace as the only Toyota drivers in the top 10. Michael McDowell was seventh, followed by David Ragan and Keselowski, and finally Chase Elliott in the only Chevrolet to finish inside the top 10.

Cindric, meanwhile, gave his family another one of the crown jewel trophies in motorsports. He’s the son of Tim Cindric, the president of Penske’s racing organization, and the maternal grandson of the late Jim Trueman, who fielded Bobby Rahal’s winning car in the 1986 Indianapolis 500. Trueman died of cancer less than a month later at age 51.

Tim Cindric watched the finish from a suite high above the speedway alongside Penske and other team executives. During the victory lane celebration, the father said his son’s victory was still sinking in.

“We’ve had the chance in our family to experience nine Indy 500s, and a lot of other things,” Tim Cindric said. “But, obviously, nothing tops when your kids accomplish their goals. To me, that’s the biggest thing, watching your kid accomplish their goal along with all these people that believed in him.”

Cindric is considered the first rookie to win the Daytona 500, although Trevor Bayne won in 2011 but was not eligible to run for rookie of the year in the Cup Series. Cindric made his Daytona 500 debut in last year’s race, which was decided by a last-lap collision that collected Cindric and his Penske teammates. All the Penske cars ended last year’s race in a ball of fire.