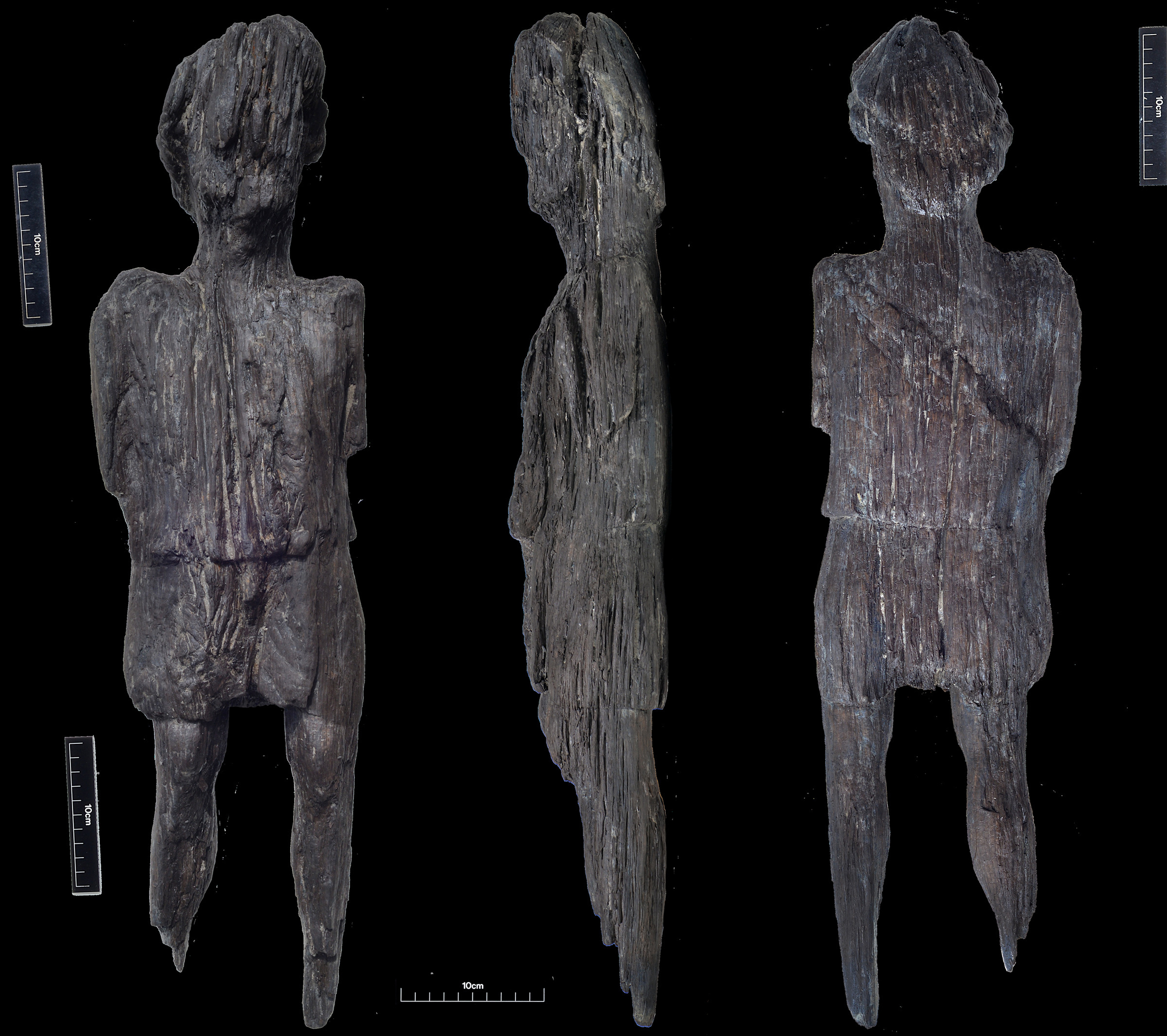 Archaeologists on Thursday hailed the discovery of an “extremely rare” and well-preserved humanlike wooden carving at a site in Buckinghamshire, England — the latest find from the digging that is being conducted as part of the country’s HS2 rail link.

The infrastructure project is intended to connect London with the country’s north, but has been criticized as expensive and unnecessary. As part of the project, sites along the route have been undergoing archaeological investigation to help shed light on the country’s past.

Earlier this week, HS2 Ltd, the publicly funded government company behind the project, announced a team had unearthed a vast Roman trading settlement filled with historical treasures dating back to as far as A.D. 43-70.

Among the rare finds were a large Roman road, coins, jewelry, glass vessels, highly decorative pottery and even evidence of ancient makeup.

The wealthy Roman trading town, which developed out of an Iron Age village, is dubbed “Blackgrounds” after the soil found there. The presence of a “significant archeological site” in the area has been known since as far back as the 18th century, the team said in a press release, and the site has been under excavation for the past 12 months by some 80 archaeologists.

“The site really does have the potential to transform our understanding of the Roman landscape in the region and beyond,” said James West, the site manager for MOLA Headland Infrastructure.

Findings suggest that the settlement had become more prosperous than originally thought, leading its inhabitants to take up Roman customs, products and building techniques — evidenced by workshops, kilns and preserved wells.

The site is located in Northamptonshire, about a two-hour drive north of London, and is one of more than 100 being examined as part of the railway line project between the British capital and Birmingham.

Among them is Three Bridge Mill, in Buckinghamshire, where the “exquisite” wooden figure was found. Buried in a water-logged ditch for centuries, the carving was discovered in July 2021 by archaeologists from Infra Archeology working for HS2’s contractor Fusion JV, before being made public Thursday.

“The amazing discovery of this wooden figure was totally unexpected, and the team did a great job of recovering it intact,” Iain Williamson, an archaeologist for Fusion JV, said.

According to initial assessment dates, the “incredibly preserved” figure dates back to the early Roman era. The figure measures just over 26 inches and 7 inches in width and is carved from a single piece of wood. While most of the figure is intact and well-defined, the feet and arms below the elbows seem to have degraded over time.

The figure is thought to be wearing a knee-length tunic which is gathered at the waist, with its head rotated slightly to the left. Noteworthy details ‘bring the individual to life’ through the preservation of carving on the head, which suggest that the figure may have been wearing a hat or donning a hairstyle.

“This is a truly remarkable find which brings us face to face with our past. The quality of the carving is exquisite and the figure is all the more exciting because organic objects from this period rarely survive” said Jim Williams, a senior science adviser and homeworker for the HS2 route.

What was initially thought to be just a degraded piece of wood turned out to be an impressive clue to how Roman settlements might have operated in the area.

“This discovery helps us to imagine what other wooden, plant or animal-based art and sculpture may have been created at this time,” he said.

The occurrence of wooden figures in British prehistory and the Romano-British period is extremely rare. Examples of wooden carvings in the United Kingdom include a wooden limb discovered in a well in Northampton in 2019, thought to be a Roman votive offering.

The figure “raises new questions about this site, who does the wooden figure represent, what was it used for and why was it significant to the people living in this part of Buckinghamshire during the 1st century A.D.?” Williamson said.

Archaeologists believe that it is possible the figure was deliberately placed in the ditch rather than being randomly thrown away. While experts cannot be certain what the carved artifact was used for, it is speculated that the figure may have been used as an offering to the gods, much like previously discovered wooden carvings.

The figure is being preserved by the York Archeology conservation specialist laboratory, where it will undergo examination and conservation. Radiocarbon dating from a small broken-off fragment of the sculpture will provide an accurate date for the wood and may indicate the wood’s origin.

The HS2 program has unearthed a treasure trove of “high-quality finds” as part of the national high-speed railway project. Helen Wass, head of heritage at HS2, said she believes that combining the infrastructure project with the archaeological dig can provide a great wealth of information about the country’s past.

“We are committed to sharing our findings with communities and the public, to deepen our understanding of Britain’s history” she said.

See How Style Stars Are Rocking Green Looks this Week on...