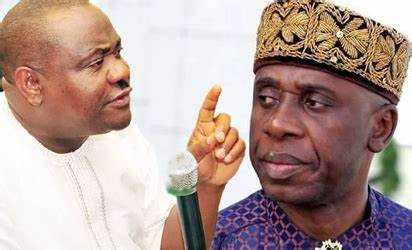 Governor Nyesom Wike has reacted to the Supreme Court dismissing an appeal filed by his predecessor and Minister of Transportation, Rotimi Amaechi, to stop the Rivers state government from probing him over an alleged N96bn fraud.

The Governor had set up a panel to probe Mr Amaechi’s dealings after he became Governor and the Supreme Court case was an attempt by Mr Amaechi to set aside the recommendations of the panel.

Wike who was Amaechi’s Chief of Staff when he was Governor, had claimed that his predecessor mismanaged state funds through Sahara Energy and Tonye Cole, who won the APC governorship primary on Thursday May 27.

Reacting to the Supreme Court Judgement on Friday May 27, Wike said Rivers state leaders will decide if Amaechi should be probed.

“We are not being vindictive, but we have been vindicated.

“If you see that report, as a Rivers man, you’ll cry,” Mr Wike, who is also running for President on the platform of the Peoples Democratic Party, said on Friday.

“One of it was a diversion of $50 million from Rivers State Government through Access Bank to Sahara Energy.

“And the issue became, what did Sahara Energy do for us that we are paying $50 million? Where is the agreement to show we borrowed money from them? Nothing.

“You said Sahara Energy bought our gas turbines. Why are we paying them $50 million? Did we borrow money from them? Where is the agreement?”