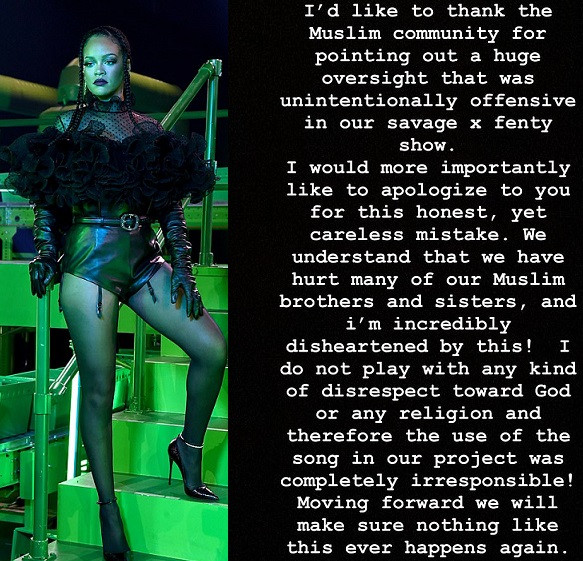 Rihanna has apologized to the Muslim community for using a song featuring sacred Islamic texts as a soundtrack to her racy Savage x Fenty lingerie show.

On Friday, Oct. 2, Rihanna’s second annual show for her lingerie brand debuted on Amazon Prime Video sparked outrage amongst fans after models were seen dancing to “Doom,” a 2017 song by London-based producer Coucou Chloe featuring a snippet from the Hadith on judgement day.

The 32-year-old pop star has now apologized to those offended by the soundtrack in a heartfelt post she shared via her Instagram Story on Tuesday.

Rihanna said she was ‘incredibly disheartened’ knowing she had hurt ‘many of our Muslim brothers and sisters’, and called use of the song ‘completely irresponsible.’

‘I’d like to thank the Muslim community for pointing out a huge oversight that was unintentionally offensive in our savage x fenty show,’ Rihanna posted on Tuesday.

‘I would more importantly like to apologize to you for this honest, yet careless mistake. We understand that we have hurt many of our Muslim brothers and sisters, and I’m incredibly disheartened by this!

‘I do not play with any kind of disrespect toward God or any religion and therefore the use of the song in our project was completely irresponsible! Moving forward we will make sure nothing like this ever happens again. Thank you for your forgiveness and understanding.’ 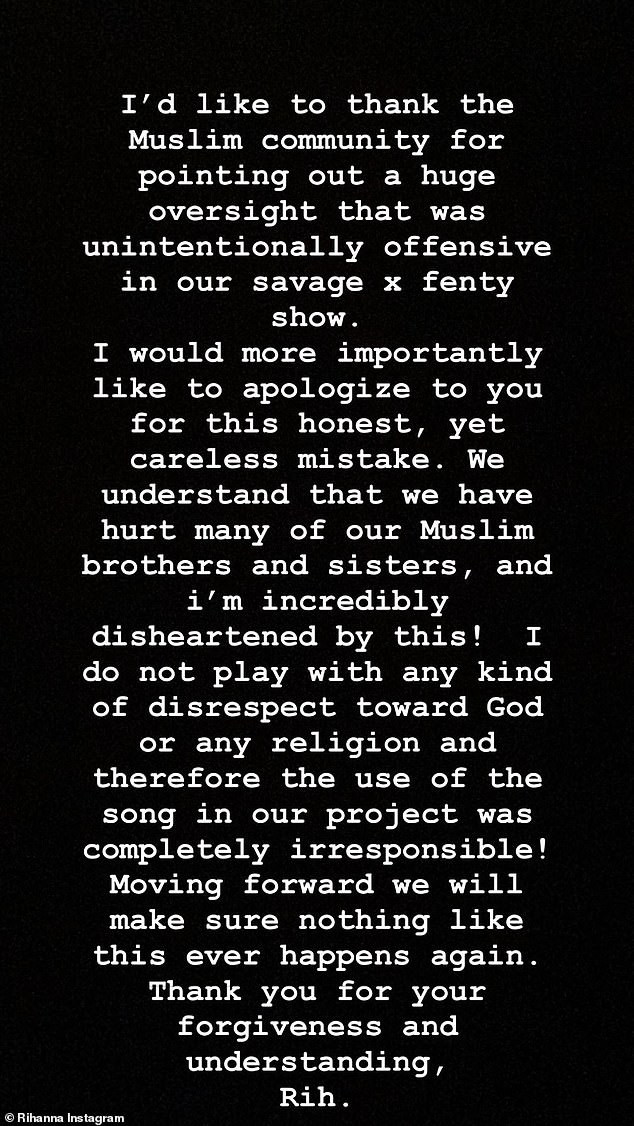 This comes a day after Coucou Chloe apologized for the controversial song in a Monday tweet:  “I want to deeply apologize for the [offense] caused by the vocal samples used in my song ‘DOOM.’ The song was created using samples from Baile Funk tracks I found online. At the time, I was not aware that these samples used text from an Islamic Hadith.”

The current state of the Nigerian youths is unbearable and intolerable, those speaking up against me are advertising me

Governor Sanwo-Olu denies ordering the killing of #EndSARS protesters as he...