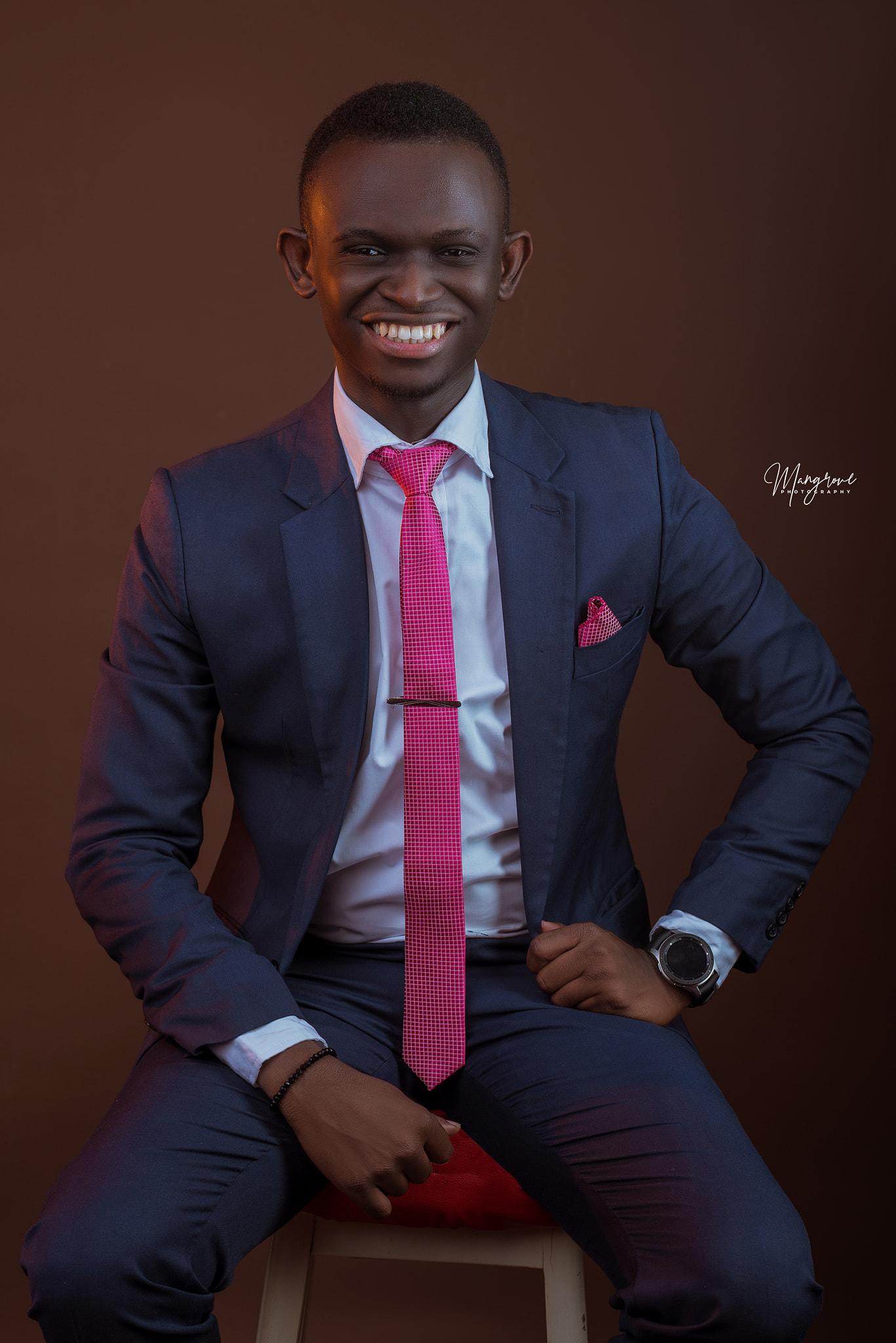 In 2020, Ebenezar Wikina was working on his application for admission into a bachelor’s degree programme at an online university, based in the U.S, and part of the requirements was that he submits an IELTS/TOEFL certificate. He had submitted his West African Examinations Council (WAEC) and National Examination Council (NECO) certificates, National Diploma Certificate and Harvard Executive Education program certificate, which he felt would suffice to provide that he could speak, read and write in English language.

Ebenezar responded to the institution, explaining why his certificates, and the fact that he’s from a country whose official language is English, should not be required to provide proof of the language’s proficiency. Ebenezar eventually won this advocacy which trended on Twitter at the time and he decided to do something about it that’ll impact the Nigeria and the continent.

That’s how the #ReformIELTSPolicy cause was born. He and his team assembled over 70 volunteer campaigners to drive the conversation across all media. 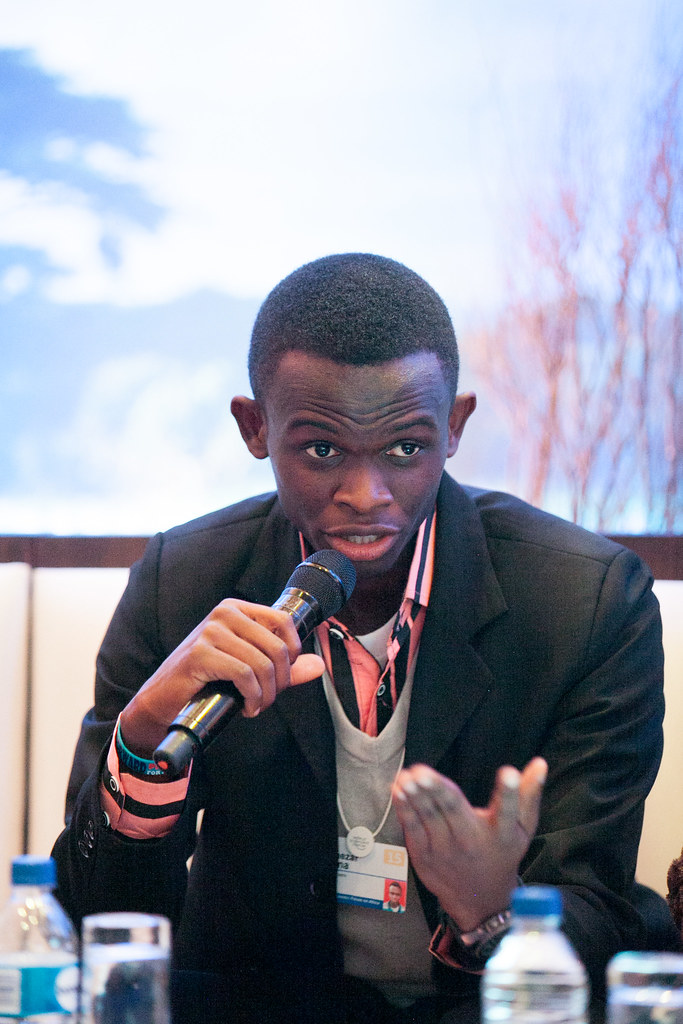 Ebenezar is the 29-year old founder of Policy Shapers, an open source platform for policy ideas and dialogue led by young people. He currently serves as Advocacy Program Coordinator at PIND Foundation, a corporate social initiative of Chevron Corporation, and Technical Anchor at the Economic Roundtable established by the Nigerian Governors Forum and the Nigerian Economic Summit Group.

Policy Shapers was founded on August 12, 2020 (International Youth Day) and the organisation strongly believes that young people are the missing stakeholder group on the policy table despite the fact that their lives and future are most-affected by policy outcomes.

Through Policy Shapers, Ebenezar and his team hopes to inspire the next generation of policymakers and provide them a platform to share their ideas and collaborate for change. The policy ideas shared on our platform are accessible publicly for anyone to learn from and this is in line with core open-source principles of open exchange, collaborative participation, transparency, meritocracy, and community-oriented development. 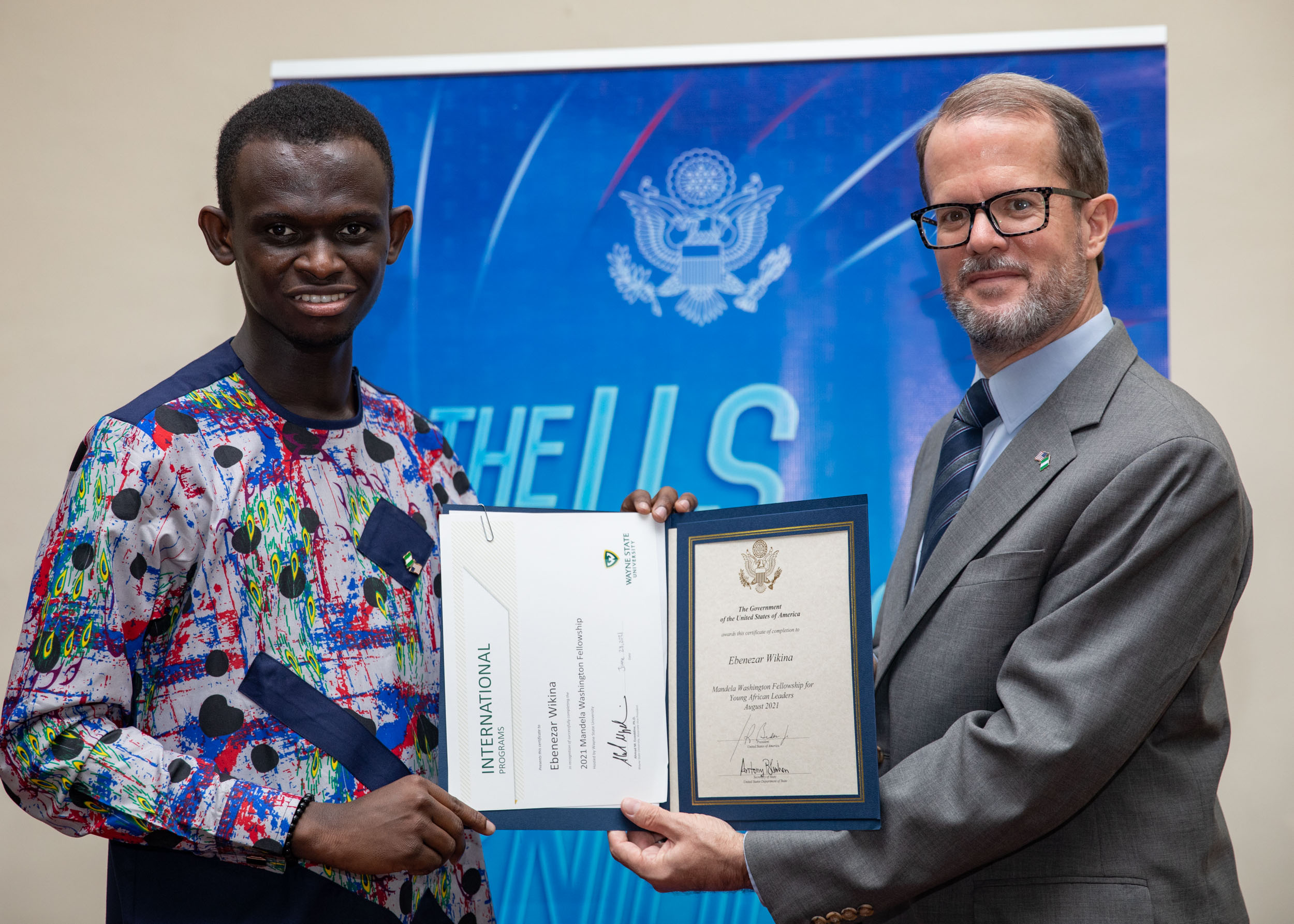 The #ReformIELTSPolicy Journey So Far

It’s been really exciting and challenging – as expected because we didn’t expect this advocacy to be a walk in the park. Thanks to advocacy strategy advice from Change.org Nigeria plus all of the support from the media (print, tv, radio), and of course the tireless efforts of all campaigners online, we have now collected over 60,000 signatures on our petition. Also, the pressure from social media has led the UK Home Office to respond to an official inquiry we made late 2021, reflecting the demands from our petition. We shall be convening a stakeholders strategy session in the coming weeks to plan how to move the engagement forward.

IELTS, Dear UK Home Office, #ReformIELTSPolicy all trended at different times for 4 days in a row on Twitter. We have started a national conversation on de-colonization and young Nigerians are speaking up about how they are treated unfairly abroad. I am proud to be part of this generation. For over 33 years, Nigerians have been subjected to language discrimination from the UK as well as around the world, and our work is to change that.

Our campaign received a major boost when Vice President of Nigeria, Professor Yemi Osinbajo endorsed the #ReformIELTSPolicy during an engagement with 2021 Mandela Washington Fellows and US Ambassador to Nigeria, Mary Beth Leonard. He said, “I entirely agree that as an English-speaking country, we should be beneficiaries of some concession as opposed to being forced every two years to take the same test especially if one has passed it before. This is something that we should really work on. I will ask the Minister of Education as well as the Minister of Youths and Sports exactly what is going on about this.”

In my speech ? to Nigeria’s Vice President last week, I asked for FG to support the #ReformIELTSPolicy campaign and he responded in agreement saying that “as an English-speaking country we should definitely be beneficiaries of some concession from @ukhomeoffice“#PolicyShapers pic.twitter.com/rQgtnqHvfu

The goal of our movement is to provide overwhelming evidence that facilitates the inclusion of Nigeria (and eventually other Anglophone countries in Africa) on the UK’s Majority English-Speaking Country (MESC) list. If this happens, Nigerians will no longer need to write the IELTS and a win in the UK, with my little knowledge of foreign relations, makes it easier to convince the U.S., Canada, Australia, etc to extend a similar exemption to us.

In a case where the above is not possible and Nigerians have to continue writing the IELTS, our 2nd level demand is for two areas of the exam to be reformed. The two-year expiry clause needs to be completely expunged. Just like the DELF/DALF, Nigerians should be able to sit for the test and their result should be valid for life. After all, we live in an English-speaking country thus there is no logical or linguistic explanation for why the result expires. Another factor is the cost of the test: currently priced at thrice the minimum wage in Nigeria, we shall demand a 30%-50% reduction because, again the DELF/DALF has shown us these tests don’t need to cost an arm and leg to be effective. 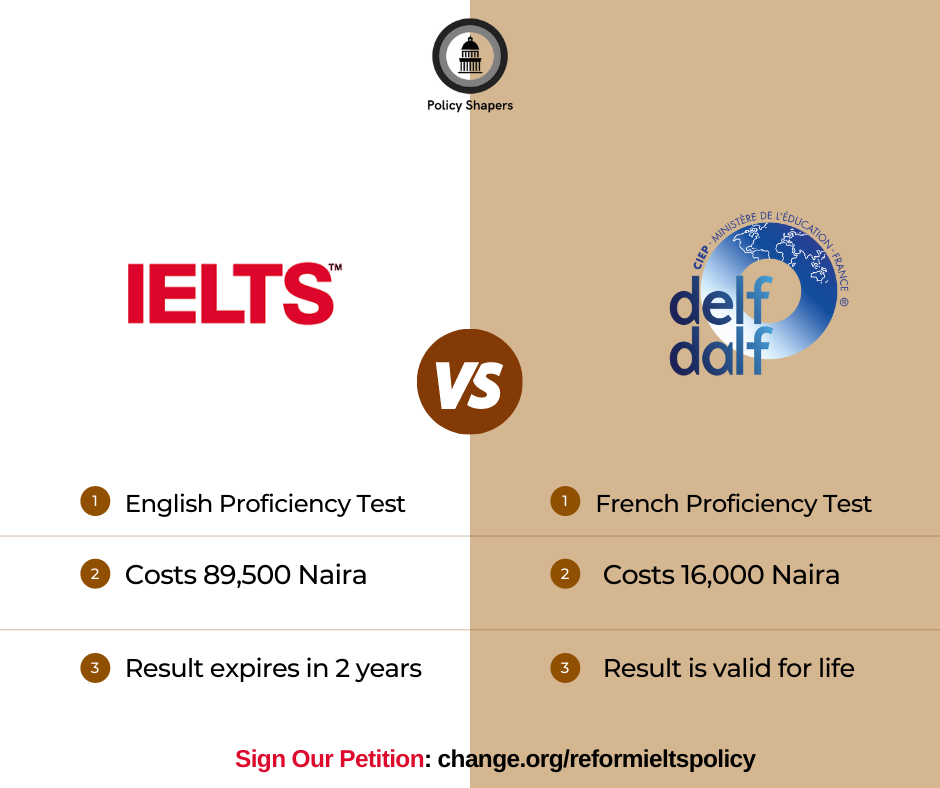 Later this year, Policy Shapers will be organising the #NaijaPolicyHackathon; a virtual hackathon aimed at crowdsourcing policy solutions to pressing challenges in Nigeria in a bid to set the agenda towards the 2023 general elections. Having participated in the MIT/Stanford COVID-19 Policy Hackathon and the Stanford Open Datathon where we emerged 3rd last year out of 300 global participants, we have acquired the experience and expertise to host the 48-hour hackathon for young people in Nigeria.

Last year we organised side events at two global summits; CC Global Summit marking the 20th anniversary of Creative Commons, and the first ever #OERCampglobal supported by UNESCO. This year we plan to host a session at RightsCon and continue our day-to-day engagement with policy enthusiasts in our community. #ReformIELTSPolicy is just one of the issues we care about addressing, and we are committed to seeing this policy advocacy through to the end.

Ebenezar sits on the British Council’s UK-Africa Youth Advisory Board, where I represent West Africa, and the Board of Trustees of the Sickle Cell Awareness and Health Foundation. I am a senior category judge of the Queen’s Commonwealth Essay Competition, the world’s oldest international writing competition for schools, and International Judge of the Association for International Broadcasting Awards (AIBs) based in London. I am also a Mastercard Foundation digital community mentor, World Economic Forum Expert Network member, G20 Civil Society Working Group member, and pioneer member of the Open Government Youth Collective. I had previously worked as a policy volunteer at the United States Congress, Guest Lecturer at Ken Saro-Wiwa Polytechnic, Technical team member at the Rivers State Government SDGs office, and TEDx Organiser.

This extensive work over the past 11 years has earned him several awards and recognition including; the first-ever Soundcity MVP Award for Community Development, the Mandela Washington Fellowship conferred by the U.S. Government, the Bridge Fellowship, Future News Worldwide, the Global Investigative Journalism Network fellowship, the inaugural list of 100 most influential young Nigerians, two nominations for the Future Awards Africa, etc. I am an alumnus of the London School of Journalism, Harvard Kennedy School Executive Education, Wayne State University, Stanford Centre for Professional Development, and International Institute of Journalism, Abuja.

He is happily married to the love of his life, Soibi-ilate Wikina (which he says is his biggest achievement).