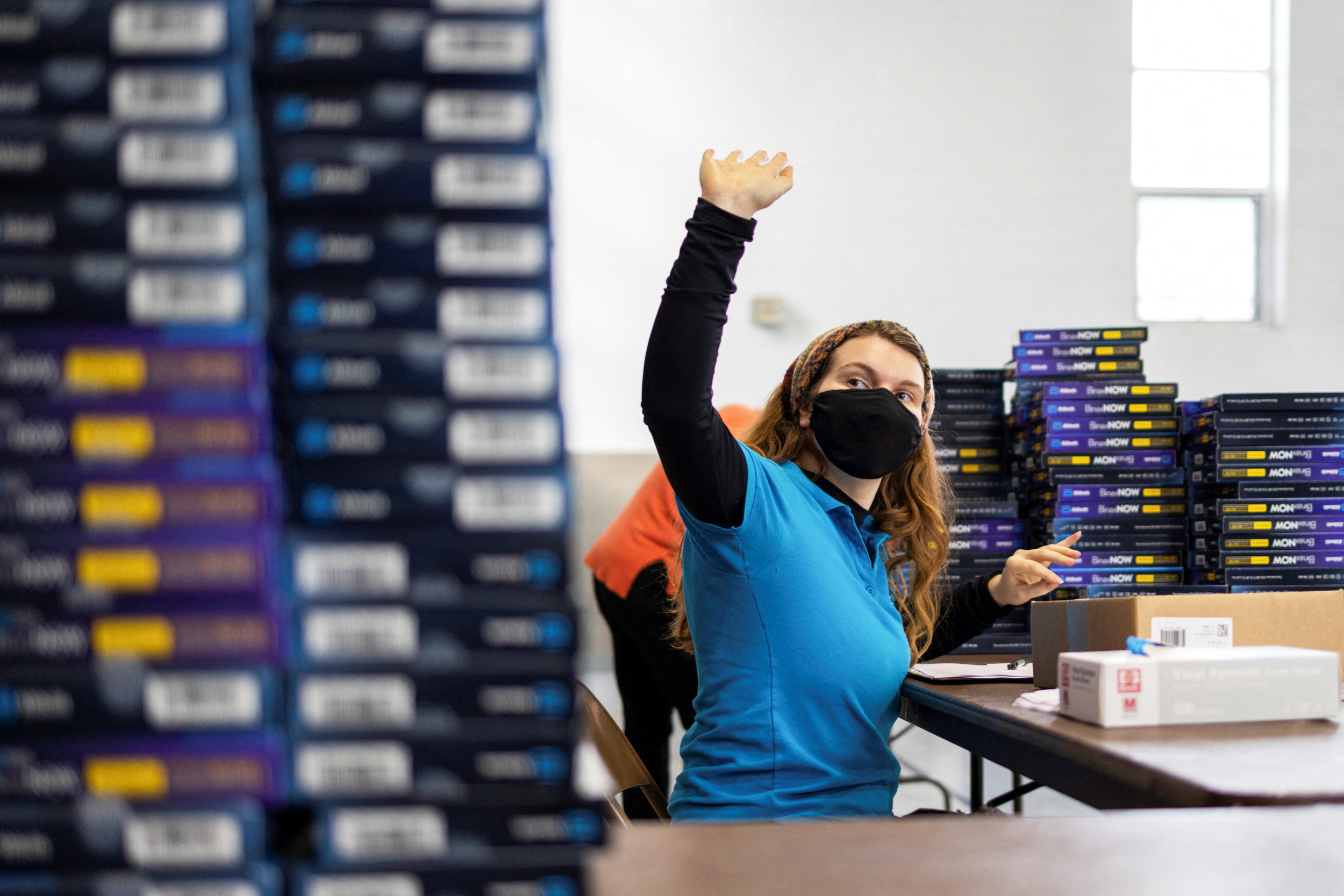 The makers of at-home rapid Covid tests are scrambling to meet soaring demand as consumers prepare for holiday gatherings and tests are suddenly in short supply amid another coronavirus surge.

Representatives for the roughly dozen companies with an FDA emergency use authorization for the tests say they’re already running at full tilt, producing tens of millions of tests per month and ramping up production even further, hiring more workers, adding shifts and tapping subcontracters to help with production.

Abbott, makers of BinaxNow, says it’s increasing capacity to 70 million tests per month from 50 million, and Quidel is also increasing its production of the QuickVue test, to the same amount. Access Bio says it’s targeting 25 million tests for December and plans to produce an additional 40 million in the coming months. Ellume says it will start making 15 million more tests a month, after production launches at its new facility in Frederick, Maryland, in January.

“We’re seeing unprecedented demand,” said John Koval, Abbott’s director of public affairs for rapid diagnostics. “And we’re sending them out as fast as we can make them. Despite public health guidance over the summer that caused the market for rapid testing to plummet, we never stopped making tests.”

The company is now also running production lines 24/7 and investing in automation, he said.

Rapid test kits are widely available in countries like the U.K., some European countries and South Korea, thanks to government purchases offering them at steep discounts or free to any one who wants them.

But until now that has not been the case in many parts of the United States, where a run on shelves has Amazon, CVS and Walgreens rationing purchases. The U.S. production of the rapid self-care home tests has risen to 216 million in December from 81 million a month in November, according to estimates by Mara Aspinall, a health professor at Arizona State University who has been tracking the trends.

That increase hasn’t been enough to meet demand, not just from consumers but employers and state governments who have been outbidding one another for the limited supply to stock up for mandatory testing of unvaccinated employees and Covid surveillance programs.

Aspinall projects capacity to rise to 305 million per month in March, a little less than would be needed to test every person over the age of 11 once per month.

In the initial response to the pandemic, the Trump administration decided early on that relying on the free market was the best way to solve Covid-related supply issues, as Vanity Fair reported in September 2020. That made it far more difficult for companies to take on the early risks of creating and selling testing kits.

“If instead of making companies take risk and risk capital and go step-wise, if the government had made funds to labs like ourselves for expansion, it could have gone faster,” said Bob Terbrueggen, CEO of DxTerity, which makes an at-home Covid collection test kit. “On the flip side, there’s lots of opportunity for labs willing to make the investment.”

Most are “lateral flow” tests, which have a liquid sample running along the surface of a pad embedded with a reactive molecule, just like a home pregnancy test. The patient typically adds a reactive liquid to a test card, swabs their nostrils, then inserts the swab into the kit and waits for “positive” or “negative.”

Recently, the Biden administration overhauled the Trump administration’s approach, saying that starting Jan. 15, people would be able to get reimbursed by their insurers for Covid test kits. However, that will only benefit those with private insurance and won’t apply to any tests bought before then. This week the administration announced it will purchase 500 million test kits that will be distributed free through a website. Some states and cities have already been offering free test kits. In September and October, the White House also announced $3 billion in investments to purchase test kits, secured agreements from manufacturers to speed production, and promised to streamline regulatory approvals needed to bring new tests to market.

Until now, each company had been left to make their own bets on how many tests to make. Undershoot demand and you’ll have shortages. Make too many and you’ll be left with excess supply and falling demand, and expiring portions of products must be destroyed unsold, as Abbott Labs did with its Binax Now devices in May, when Covid rates were falling and interest in home tests was low.

That uncertainty has made it hard for testing companies to figure out how many to make. An SEC filing from Quidel warned that “inventory levels may fluctuate due to supply chain variability in conjunction with larger and more frequent customer orders” and of “delays” of “raw materials and components.” Company operations are based on factors that “cannot be predicted, including the duration of the Covid-19 outbreak, the severity and continuation of outbreak surges, actions to contain the spread of the virus such as mask wearing, social distancing and vaccination efforts globally, and the impact of these and other factors on testing demand,” it continues.

“The whiplash demand scenario for test kits is really difficult for manufacturers to manage,” said Thomas Goldsby, a logistics professor at the University of Tennessee. “When there is demand, it comes in huge surges, but, of course, production doesn’t work that way.  Production requires long, steady runs with plenty of setup time to get quality where it needs to be. Running big production batches leaves the manufacturers with product facing limited shelf life, ranging from 6 to 12 months, depending on the test type.”

But companies that predicted a rise in Covid cases seem to be in better shape. Ron Gutman, co-CEO of Intrivo, says his company has “tens of millions” of rapid Covid tests on-hand and the ability to scale production even higher.

Gutman says his tests are in stock on the company website or online at major online retailers like Amazon and Walmart, without limits on how many can be bought. The company plans to roll out capacity in select major cities to have the tests available even faster. And it’s announcing a new service that will allow the hosts of events or gatherings to arrange for tests to be sent to every guest.

But pronouncements of increased production at many of the largest test kit companies won’t come soon enough for families who don’t know if they’ll be able to get tested in time before holiday gatherings.

Though his household is fully vaccinated, Will Swarts, a 52-year-old public relations worker in Brooklyn, is worried about encountering anyone immunocompromised over the holidays. Five times in a row, he checked with store websites and phoned ahead to verify they had test kits in stock, only to drive up and find them sold out. Eventually he found some at a nearby Walgreens and dashed over.

“Everyone is kind of amped up and nervous,” Swarts said. “There’s an element of hypervigilance at work here, but the problem with this highly transmissible variant is still very real.”

Those who were able to buy ahead of time are grateful to already have their hands on a cache of tests, and wish it wasn’t up to them.

“I stocked up at Halloween, because even before omicron you could have predicted a winter surge, especially in the Northeast, which public officials and testing company executives should have predicted too,” said David Harrington, a nonprofit co-director from Brooklyn.

“Not trying to be conceited,” he said. “It shouldn’t be on everyday people to figure this out.”