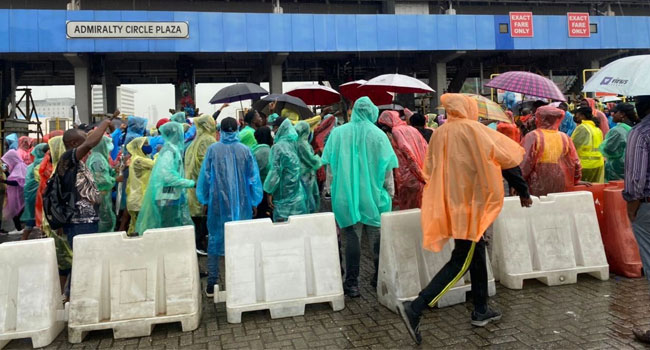 Protests against police brutality and extra-judicial killings continue on with a new hashtag #EndSWAT.

The protest follows the decision of the Inspector-General of Police, Mohammed Adamu, to set up a new unit called the Special Weapons and Tactics (SWAT) Team, to replace the disbanded Special Anti-Robbery Unit (SARS).

According to the protesters, the agitation continues because the decision to immediately replace SARS operatives with SWAT is hasty and unpremeditated.

“All hashtags remain valid towards the struggle. Be vigilant. This is about all of us. We are all in pains right now but don’t let those we have lost die in vain. I saw the SWAT thing. Hasty. But will address,” the convener of #EndSARS Segun Awosanya populary known as Segalinks posted in Twitter on Tuesday morning.

At the Lekki Toll Gate in Lagos, some of the protesters can be seen chanting song of solidarity and demonstrating despite the early morning rain.

See below tweets containing photos and videos from the protest…