Students of Ondo State government-owned Adekunle Ajasin University Akungba-Akoko have trooped to the streets to protest against incessant road crashes close to the university campus.

Over the years, many lives have been lost in such road crashes, usually caused by articulated vehicles passing by the route. The students were aggravated by the most recent of such road crashes that happened on Thursday night and claimed the life of a former student of the university, Michael Akinniyi.

The angry students were said to have pursued the trailer, which knocked down Michael, to a neighboring town Oba-Akoko where he was arrested.

Early Friday morning, some students converged at the main gate of the university chanting solidarity songs with placards having different inscriptions to express their grievances.

On Twitter, the hashtag, #SaveAkungba, was among the top trends as many joined the students in calling for action over the repeated accidents. 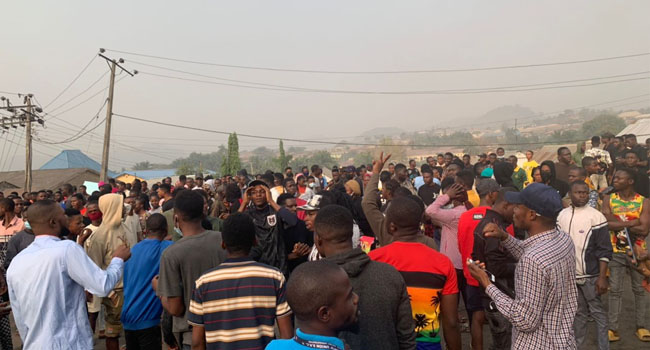 The students are calling on the authorities to intervene in the matter.

Meanwhile, the management of the university has postponed the ongoing examinations in order to douse the situation.

“In view of the accident that claimed the life of a former student late evening of yesterday, Thursday, 3rd February 2022, Management has decided to postpone today’s examinations,”  a statement from the school read.

“This is to honour the departed soul. A new date for the examinations will be announced later.”