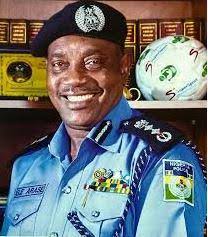 Solomon Arase the former Inspector-General of Police is going to be the Chairman of the Police Service Commission (PSC).

President Muhammadu Buhari has forwarded his letter of appointment to  the Senate on Tuesday 24 January 2023  for confirmation.

The appointment  was disclosed in a letter submitted before the lawmakers at Tuesday plenary session.

If confirmed that Arase will succeed Musiliu Smith, another former IGP who resigned under controversial circumstances last year.

Before his appointment as IGP, Arase was head of the topmost intelligence-gathering unit of the Nigeria Police Force, the Criminal Intelligence and Investigation Bureau.

Born on June 21, 1956 in the Owan West Local Government, Edo state, he attended Ahmadu Bello University for his undergraduate studies and graduated with a political science degree in 1980.

Arase served in various capacities in the police force, including as Commissioner of Police in Akwa Ibom State and as Assistant Inspector General in the intelligence gathering unit. He is a Nigerian Defence Academy Fellow who served in Namibia during a United Nations peacekeeping mission.

Arase is a thoroughbred  professional super cop. A learned Lawyer.