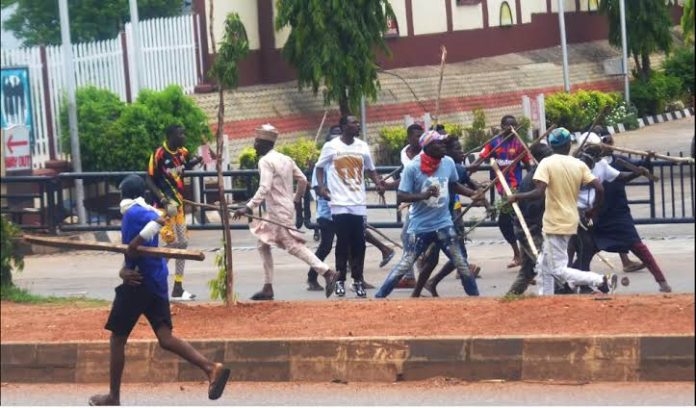 A video not authenticated was seen by newspot where thugs were seen on Tuesday allegedly attacking the supporters of Senator Orji Uzor Kalu.

Despite the heavy presence of security operatives, the thugs armed with sticks reportedly attacked Orji’s supporters ordering them to leave the venue of the campaign rally.

Although, the reason for the attack could not be ascertained as none of the invaders were willing to say anything.

Meanwhile, a socio-political group, Abia Rebirth Initiative, ARI, had cautioned one Chief Emenike against importing thugs from the neighbouring states to the venue of the rally.

The group said Chief Emenike had concluded arrangements to bring thugs at the rally to unleash mayhem on some political figures and their supporters in the state, warning that this will have a grave implication.

ARI in a statement on Tuesday through its National Coordinator, James Nwaokike, said it has been at the forefront of advocating for a peaceful campaign in the state, warning political figures against reversing gains made in building a culture of peace and tolerance in the state.

The statement read in part, “We have it on good authority that High Chief Ikechi Emenike and his co-travellers have imported at least 1000 thugs from Imo, Anambra, Ebonyi and parts of Akwa Ibom to storm the venue of campaign rally of APC presidential candidate, Asiwaju Bola Tinubu in Umuahia.

“Information available to us indicates that his prime target is the Chief Whip of the Senate and leader of APC in Abia State, Sen. Orji Uzor Kalu and his supporters numbering more than 60,000, such as the Reality Organization, OUK Movement etc.

“High Chief Emenike has shown bitterness against his party leaders, though needlessly and unjustified. This latest attempt is in a bid to cause tension and avoidable chaos in a politically volatile environment like Abia.

“He wants to unleash his foot soldiers and imported thugs against Sen. Kalu and those loyal to him at the campaign rally. This is not in the interest of anyone and must be avoided.”