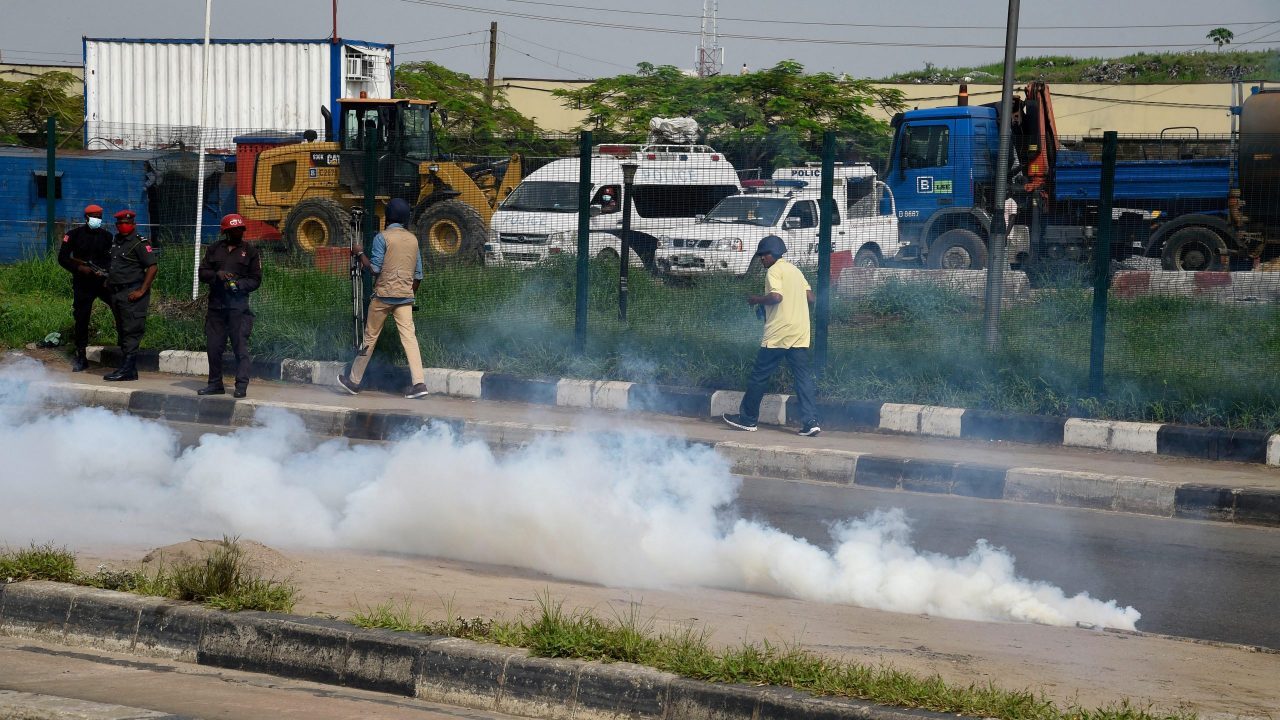 Tear gas canisters shot by anti-riots policemen are seen during a demonstration at Ojota in Lagos on June 12, 2021, as Nigerian activists called for nationwide protests over what they criticise as bad governance and insecurity, as well as the recent ban of US social media platform Twitter by the government of President Muhammadu Buhari. – Hundreds of protesters gathered on June 12, 2021 in Lagos, a sprawling megapolis of over 20 million people, and police fired tear gas to disperse the crowd. (Photo by PIUS UTOMI EKPEI / AFP)

Nigerian police on Saturday fired tear gas to disperse anti-government protests in the commercial city of Lagos and the capital Abuja, injuring some people and arresting others, AFP reporters said.

Nigerian activists had called for nationwide protests over what they criticise as bad governance and insecurity, as well as the recent ban of US social media platform Twitter by the government of President Muhammadu Buhari.

The protests were the first to take place simultaneously in several cities since the #EndSARS movement against police brutality in October grew into the largest anti-government rallies in Nigeria’s modern history.

Hundreds of protesters gathered on Saturday in Lagos, a sprawling megapolis of over 20 million people, and police fired tear gas to disperse the crowd.

The protesters carried banners and placards saying “Buhari Must Go”, calling for reforms.

In Abuja, a similar scenario played out as the protesters gathered as early as 7.00 am.

A detachment of police and army broke up the crowd using tear gas, AFP reporters at the scene said.

Some journalists were harassed by the security forces, they said.

Police had said the protests were unauthorised and AFP reporters said they saw several people being detained.

There were also pockets of protests in Ibadan, Osogbo, Abeokuta and Akure, all in southwestern Nigeria.

Buhari, a former general first elected in 2015, has been under pressure over growing insecurity in Africa’s most populous nation, home to more than 200 million people.

Security forces are battling a jihadist insurgency in the northeast, a surge in mass kidnappings and attacks by criminal gangs in the northwest and a rise in separatist tensions in the southeast.

The government also triggered an outcry a week ago when it indefinitely suspended Twitter in the country, saying the platform was used for activities aiming to destabilise Nigeria.

The UN, Nigeria’s Western partners and rights groups all condemned the move as a blow to freedom of expression.

Saturday’s demonstrations were called to coincide with “Democracy Day”, marking the anniversary of Moshood Kashimawo Abiola’s election as Nigerian president in 1993.

Abiola’s victory was annulled by the then military government, plunging Nigeria into months of civil unrest.

Nigeria returned to civilian rule on May 29, 1999, but Buhari chose June 12 as Democracy Day after becoming president to honour Abiola and other heroes of the struggle.