Personnel of the Nigeria Police Force on Friday dispersed Nigerians who took the #EndSARS protest to the Federal Capital Territory in Abuja.

The protesters are demanding an end to brutality and extra-judicial killings by operatives of the Special Anti-Robbery Squad (SARS).

In some videos circulating online, some armed policemen chased the protesters who marched on the Central Area of Abuja.

Shots were fired in the air as residents scampered for safety.

However, it could not be ascertained if there was any fatality at the time of filing this report. 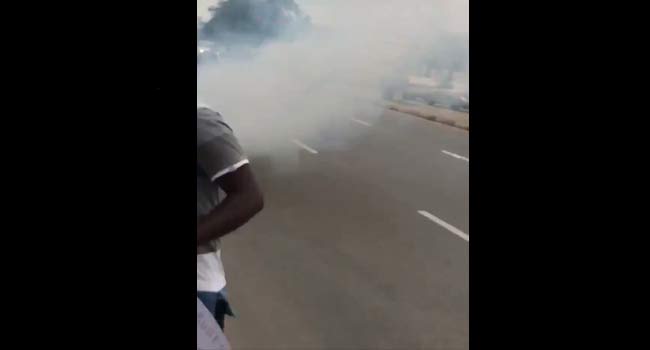 On Thursday, activists, Deji Adeyanju and Aisha Yesufu, and the publisher of Sahara Reporters Omoyele Sowore led the protesters in the nation’s capital.

The campaigners sat on the Shehu Shagari Way, shouting ‘EndSARS,’ while paralysing vehicular movement. They also wielded placards with the same inscription and poured red paints on the floors to signify the blood of victims of extrajudicial killings.

I don’t know if Abuja has celebrities, but it was disappointing that not a single one was out there today.
Thanks to all those who risked their lives today to pass a message to government of this nation. It’s not over! #EndPoliceBrutality #EndSARSImmediately #EndSARS pic.twitter.com/ACvIT2myUX

The protests also took place in other states including Lagos, the nation’s commercial capital where the protesters sieged the State House of Assembly, demanding to speak with Governor Babajide Sanwo-Olu.

In Lagos, they were joined by music artistes and celebrities including Folarin Falana popularly known as Falz; and pop star, Runtown; Tiwa Savage, Paul of Psquare, Jaywon, Dremo, This is Wurld and popular Dj Spinall.

In Benin City, the capital of Edo State, youths from various groups including Coalition of Youth Groups, Civil Society Of Nigeria, and National Association of Nigerian Students (NANS) marched in a peaceful protest and called for an end to harassment by members of the Special Anti-Robbery Squad.

The youths converged on Ring Road, marched to the Nigeria Union of Journalists (NUJ) secretariat in the state, and later moved to the Edo State Police Command Headquarters to express their agitations.