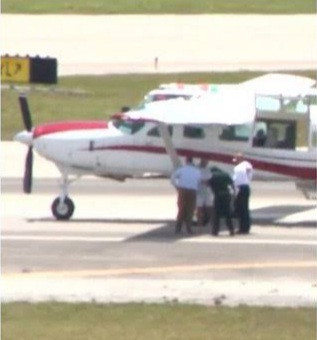 The pilot who fell unconscious last week mid-flight has made a recovery that his doctor is calling “a miracle.”

After the pilot lost consciousness, a passenger with no experience on how to fly a plane succeeded in landing the plane, saving all three people on board from crashing.

Darren Harrison, 39, successfully landed the plane at Palm Beach International Airport, where emergency personnel then rushed the pilot to St. Mary’s Medical Center before he was transferred to Palm Beach Gardens Medical Center.

The pilot, whose name has not been released, is now out of the hospital and resting at home after he underwent surgery for an aortic dissection, according to the hospital.

An aortic dissection is a life-threatening emergency in which a tear occurs in the inner layer of the body’s main artery.

Dr. Nishant Patel, a cardiothoracic surgeon at Palm Beach Gardens Medical Center who treated the pilot, revealed how long the odds were that the man would survive the landing, the trips to the two hospitals and then the surgery.

The pilot was released from the hospital on Monday, May 16.

Emergency personnel initially thought the pilot had potentially suffered a stroke before doctors at St. Mary’s discovered a tear in his aorta, according to Patel. He was quickly transferred to the second hospital for emergency surgery.

“First thing he asked me (after the surgery) is, ‘Doc, when am I going to go home?’ which I thought was really quite amazing,” Patel said. “Everything about this guy is just truly, truly amazing. He definitely understands everything that happened, and how severe the situation was on so many different levels before the hospital, in the operating room, and during recovery.”

Patel said the pilot was in great health before the cardiac event and has already done “remarkably well” in his recovery.