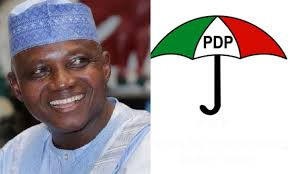 The Peoples Democratic Party and the Presidency have shared their different viewpoint of a video of APC National Chairman, Adams Oshiomhole and the Chief of Staff to the President, Prof. Ibrahim Gambari having a discussion at the Presidential Villa on Monday August 17.

National Publicity Secretary of the PDP, Kola Ologbondiyan in a statement released on Tuesday August 18, raised an alarm of an alleged plot by the All Progressives Congress-led Federal Government to arrest some of its supporters ahead of the election.

Ologbondiyan also alleged that Oshiomhole and Gambari were allegedly planning a clampdown on certain unnamed Nigerians to achieve political suppression and submission ahead of the Edo election.

“Nigerians were alarmed by the video in which Oshiomhole was seen emphatically urging the Chief of Staff to Mr President on the need to clampdown on certain unnamed Nigerians to achieve political suppression and submission ahead of the Edo election.

“Our national campaign holds that the presence and involvement of the Chief of Staff to the President and the fact that the discussion held within the precincts of the Presidential Villa, have made the Presidency complicit and place a huge burden on President Muhammadu Buhari.”

Adams Aliu Oshiomhole planning with chief of staff to the president to arrest top PDP members in Edo before election to make things easier for APC. Just listened to this video.

The presidency is hear by warned!!! Not to try any nonsense in Edo state. pic.twitter.com/bzecznTfAR

However reacting to this, Senior Special Assistant to the President on Media and Publicity, Garba Shehu insisted that the circulated video is “an ingenious patchwork of mischief.” He further revealed that the video was extracted from an innocent conversation focused on the emerging incidents of violence in the run up to the election.

‘We Will Continue To Work With Our Neighbours’, Buhari Tells President...