Parliamentary workers in Bauchi and Gombe states have shut down state assembly complexes following a directive by the national leadership of the Parliamentary Association of Nigeria to embark on a nationwide indefinite strike.

The industrial action of the workers is over non-implementation of Financial Autonomy Act 2018 and Presidential Order 10.

Members of the union in Bauchi, early Tuesday morning closed down major entrances to the assembly complex preventing staff from gaining access.

They also pasted placards on the walls of the main entrance of the Assembly, stating their demands. 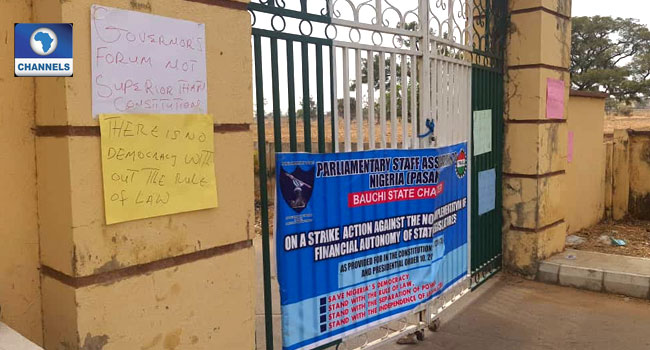 In Gombe State, the union members stormed the state assembly complex carrying placards as they also put the assembly gates under lock.

Members of the Association say the industrial action had become inevitable after several ultimatums given to the government to implement the financial autonomy act elapsed.

The parliamentary workers commenced the nationwide strike two weeks after they staged a protest at the gate of the National Assembly in Abuja.

During the demonstration held on March 9, they threatened to continue the protest and occupy all State Houses of Assembly if their demands were not met.

The workers also called on the members of the National Assembly to take the necessary steps to ensure the implementation of financial autonomy for the judiciary.