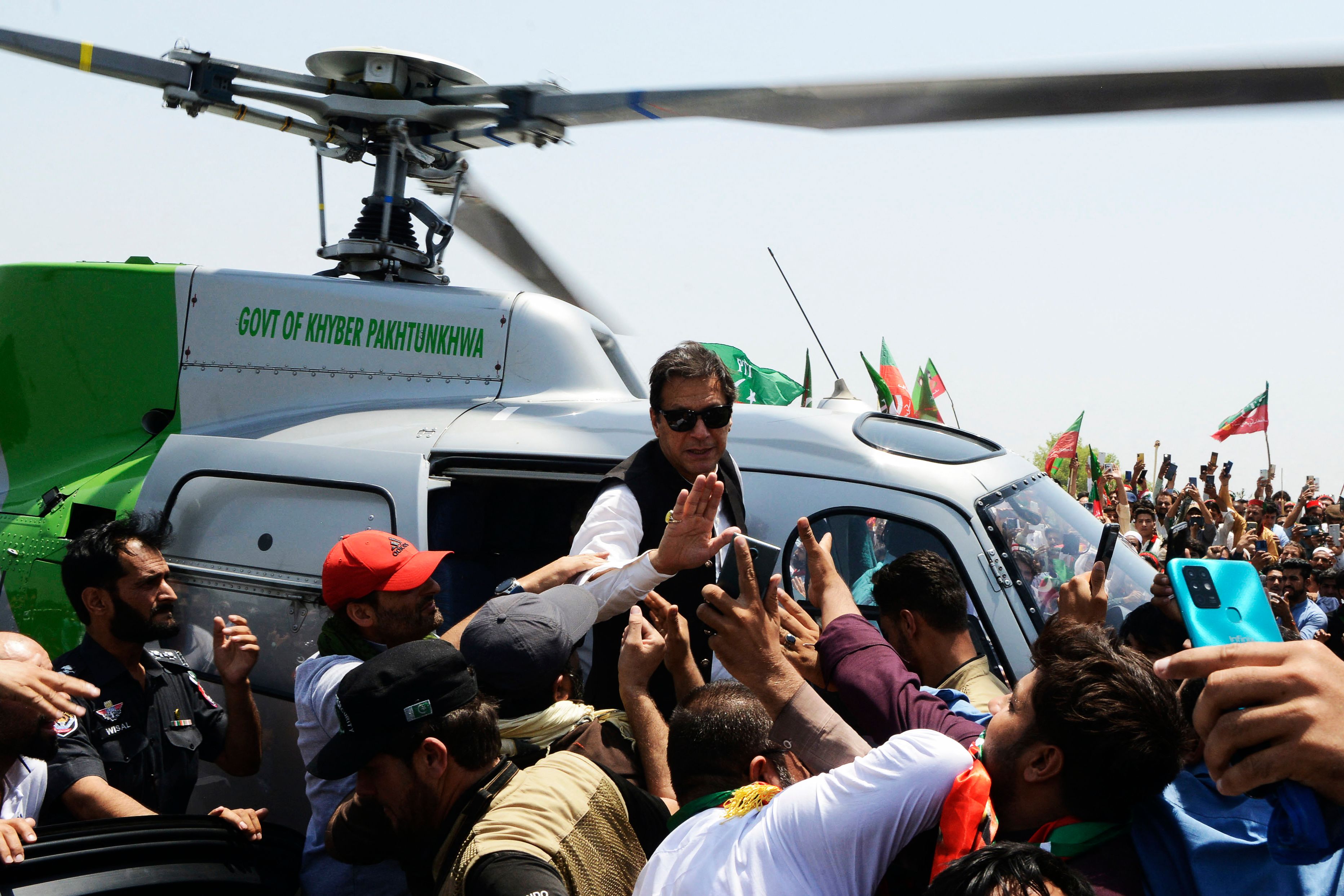 ISLAMABAD — Authorities in Pakistan used dozens of shipping containers and trucks to block off major roads into Islamabad on Wednesday, after a defiant former Prime Minister Imran Khan said he would march with demonstrators to the city center for a rally he hopes will bring down the government and force early elections.

The march has raised fears of major violence between supporters of Khan — the country’s top opposition leader — and security forces. Already in the morning, riot police fired tear gas and pushed back hundreds of stone-throwing demonstrators who were trying to pass a roadblocked bridge near Lahore to board buses bound for the capital. A dozen demonstrators and several police officers were injured.

Khan, a former cricket star turned Islamist politician, served as prime minister for over three and a half years until last month, when he was ousted by a no-confidence vote in Parliament. Since then, he has held rallies with thousands of people across the country.

Although Wednesday’s demonstration was banned a day earlier, Khan insists it will be massive and peaceful, and not end until the government agrees to hold fresh elections this year, not in 2023 as scheduled. Organizers plan for crowds to travel by car and bus to Islamabad’s city limits, then march on foot.

Khan himself traveled by helicopter to a highway some 60 miles northwest of Islamabad, where he condemned the police crackdown and urged supporters to join the rally.

“My message for the nation: Everyone must break out of the grip of fear to achieve freedom,” he wrote on Twitter, before starting out by vehicle from the Swabi interchange. His convoy still faces a series of roadblocks ahead that would require heavy machinery to remove.

Khan says his removal from office was the result of a U.S.-organized plot and collusion with his successor Shahbaz Sharif, whose government has vowed a stern response if Khan violates the ban. Washington has denied any role in Pakistan’s internal politics.

Overnight, authorities blocked the main highway into the city with shipping containers filled with earth, while similar obstacles sprung up on other routes into the city. Khan has urged his supporters to remove the containers and circumvent any blockades in order to enter the city. “I will be among you Wednesday afternoon,” he said Tuesday, to rally in front of Parliament.

Khan has already massed thousands of supporters along with leaders of his Tehreek-e-Insaf party in Peshawar, the capital of northwestern Khyber Pakhtunkhwa province where his party rules. From there, his followers must cross a bridge at the province’s border that the government has blocked, before assembling on the outskirts of Islamabad.

The government launched a crackdown on his supporters ahead of the march, arresting hundreds across the country. They have deployed additional police and paramilitary troops on highways and in Islamabad to stop the rally, with tractor trailers parked across both lanes of traffic in several areas.

The measures were announced after a police officer was killed during a raid on the home of a notable Khan supporter in Lahore. Interior Minister Rana Sanaullah said Khan will be arrested if the rally goes ahead. Riot police are massing near the roadblocks.

Meanwhile, Pakistan’s Supreme Court was about to hear a petition to remove the blockades into Islamabad. Authorities say that if Khan agrees to submit a written assurance that his rally will be peaceful and he will confine himself to a public park, the government will consider lifting its ban.