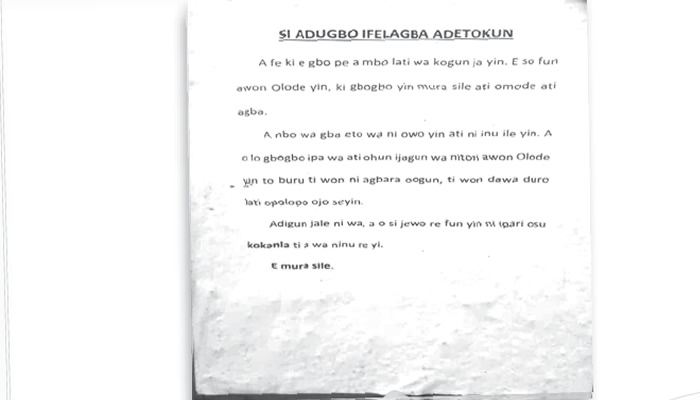 Landlords and residents in Ifelagba community, in the Ido Local Government Area of Oyo State, have been living in fear after suspected armed robbers notified them of their plan to attack the community.

The robbers, in the letter written in Yoruba language, said they were ready to overpower the vigilantes that had made robbery operations difficult for them in the community.

The letter read in part, “We are coming to collect our rights and money in your houses. We will use all our power and strength to fight the vigilantes because of all their wicked acts and how they have stopped us all these years. We are armed robbers and we will show you who we are at the end of this month when we invade your community. Be prepared.”

One of the residents, Tayo Oresanya, said the situation had deprived them of sleeping peacefully at night, adding that they still felt unsafe despite the presence of policemen patrolling the community.

Oresanya said, “We sleep with one eye closed because we don’t know when these people will attack us. For armed robbers to get the boldness to tell us when they want to attack shows that they have really prepared for us. We have security operatives patrolling the community, but we still don’t feel safe, we have left everything in God’s hand.”

A community leader, who refused to mention his name for security reasons, said five out of the six gates leading to the community had been locked to keep residents in the community safe.

He said, “Since we received the letter, the police have been patrolling the area. The letter was pasted in strategic houses. It shows that they are people living with us.

“We cannot disclose all the security measures we are putting in place to ensure we save the lives and property of our people. But I can tell you that we are on top of the matter.”

A security expert, Wale Olatunji, said the police must carry out a discreet investigation to ascertain those living within the community that may be part of the robbery gang.

He said, “The police must be discreet in their investigation and plan on how they want to secure the community so that they don’t end up giving information to one of the robbers.”

Contacted, the state Police Public Relations Officer, Adewale Osifeso, promised to get back to our correspondent for a reaction.

He had yet to do so as of the time this report was filed.

International HCI Skills Gateway Scholarships 2023 at University of Edinburgh in...

International HCI Skills Gateway Scholarships 2023 at University of Edinburgh in...