Over 5,000 smart card readers are said to have been destroyed in the fire that engulfed the head office of the Independent National Electoral Commission (INEC) in Akure, Thursday.

Confirming this on Friday, the Resident Electoral Commissioner (REC) of INEC in the state, Amb. Rufus Akeju told newsmen that the inferno started at about 7:30pm after the office had been closed for the day.

According to him, 5,141 smart card readers were destroyed in the fire.

Mr Akeju stressed that things could have been worse, had it not been for the timely intervention of the men of the Ondo State Fire Service, Federal Fire Service, and fire service officials from Ilesa, Osun State. 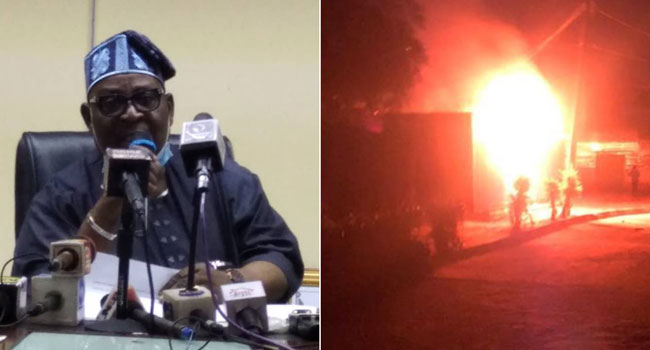 At the time of reporting, the actual cause of the fire is yet unknown, but the REC assured that appropriate agencies are already investigating the incident.

The Commissioner also stated that the incident will not affect the coming election in the state, stressing that necessary arrangements are being put in place to replace the burnt materials.

The fire outbreak on Thursday comes only a few weeks to the October 10 governorship election in the state.

INEC’s Commissioner in charge of Information and Voters Education, Festus Okoye, told journalists at the scene of the incident that the fire affected the Information and Communication Technology section of the Commission.

Speaking further on the damaged materials, Mr Okoye revealed that about 1000 card readers delivered to INEC from Osun State were caught up in the flames alongside over 4000 card readers belonging to INEC in Ondo State.

He, however, assured that the inferno will not lead to the postponement of the polls.

Pride And Caution In Wuhan On Lockdown Anniversary – Newspot

Fulani Herdsmen Voted Akeredolu, He Can’t Chase Us Out – Miyetti...

Pride And Caution In Wuhan On Lockdown Anniversary – Newspot