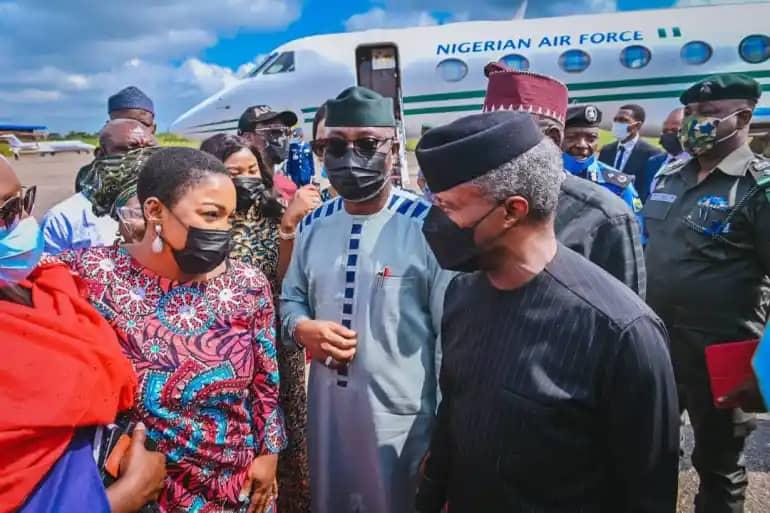 Vice President, Prof. Yemi Osinbajo yesterday made a case for orphans in the country saying they needed spaces to grow, thrive and meet their physiological needs

He said this at the inauguration of a charity and social development centre called Dorian Home in Akure, Ondo state capital.

The orphanage was built by a philanthropist, Dr Tolulola Bayode.

He said the number of children whose parents had been killed during conflicts in the country is about nine per cent of the nation’s population.

” The number of the young children turned to orphans had increased over the year and stressed the need to rebuild their lives after their harrowing experiences during the violence.

According to him “being an orphan did not determine the greatness of a child in the future, said many great men in Nigeria and the world were orphans, hence the need to help the children in the orphanage category.

” We are confronted with a huge challenge. In 2015, the Federal Ministry of Women Affairs and Social Development has estimated that there were about 17.5million orphans and vulnerable children in a nation of about a 200million people.

“That is close to nine per cent of the population. Sadly this number has increased over the years due to violence, conflicts, communal clashes in different parts of the country.

” This is a large number of widows and vulnerable women and again due to conflicts in different parts of the country, the number has grown.

” A million of orphan children need spaces to grow and to thrive and ensure that there physiological needs met, a place where they are cared for and trained.

“The women after harrowing experience also need spaces where they can begin to rebuild, that is why places like Dorian Home initiatives are needed.”

He however, said government alone cannot solve this society’s biggest problems but require stakeholders attention and resources to support the orphans and vulnerable children who have lost one or both parents.

Osinbajo commended the initiative of the founder and President of the Dorian Homes, Dr Tolulola Bayode, saying such initiatives will expose orphans and women to better care and the world will be a better place for them.

He said “some of the greatest names of our time which include, Eleanor Roosevelt, Nelson Mandela, Malcolm X, Ella Fitzgerald, Leo Tolstoy, Louis Armstrong, and Steve Jobs among others grew up as orphans, and they changed history.

The founder of the orphanage, Bayode said that she was motivated by her parents and two experiences that changed her orientation and mindset towards rendering social services to humanity.

” The first was my excruciating pain I went through before I could deli er my son, Dorian, after whom this home is named. I encountered some childbirth complications that brought me face to face with realities of life.

“These questions mirror the reality of many people in our society today , women who have lost their husband’s and have the weight of their families on their shoulders, children on the streets without hope of where the next meal will come from”

Bayode said the state-of-the art building would accomodate motherless babies , their games, dinning, a decent kitchen, women training among other features to develop the skills of the orphans in the home.

Governor Rotimi Akeredolu described the initiative as unique noting that his government will continue to partner with individuals and corporate organizations in complementing the state government community projects.

Speaking through his deputy, Hon Lucky Aiyedatiwa said that the home would open several windows of opportunities for the people of the state.

Akeredolu said that the humanitarian project “would complement the good agenda of his administration .

He added that the Dorian Home “would have the total support of the Ondo State Government.”

Present at the inauguration of the orphanage include traditional rulers, ministers, National Assembly members, state lawmakers and other personalities across the country.