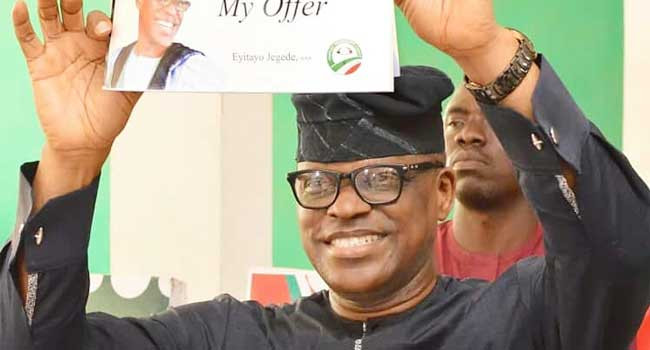 Ondo state deputy governor, Agboola Ajayi, has lost out in the race to pick the PDP governorship ticket as a former Attorney General and Commissioner of Justice in the state, Eyitayo Jegede, has emerged the party’s flag bearer for the October 10 governorship election.

Eyitayo won the party’s governorship primaries held at the International Culture and Events Center, the dome in Akure, the state capital on Wednesday, July 22.

He polled a total of 888 votes to defeat his closest rival and incumbent Deputy Governor of the state, Agboola Ajayi who garnered 657 votes.

With this development, Jegede will now battle the candidate of the All Progressives Congress (APC) and incumbent governor, Rotimi Akeredolu in the governorship election which is barely three months away.

Agboola who is in a running battle with the state governor, Rotimi Akeredolu, defected from the APC to the PDP in June with the hope of picking the party’s ticket so he can run against the governor.

UNICAL notice to students ahead of resumption

The Government Of Buhari Has Disappointed Nigerians – Jega

Why Bullets Fired At Me In Seriki Fulani’s Place Did Not...