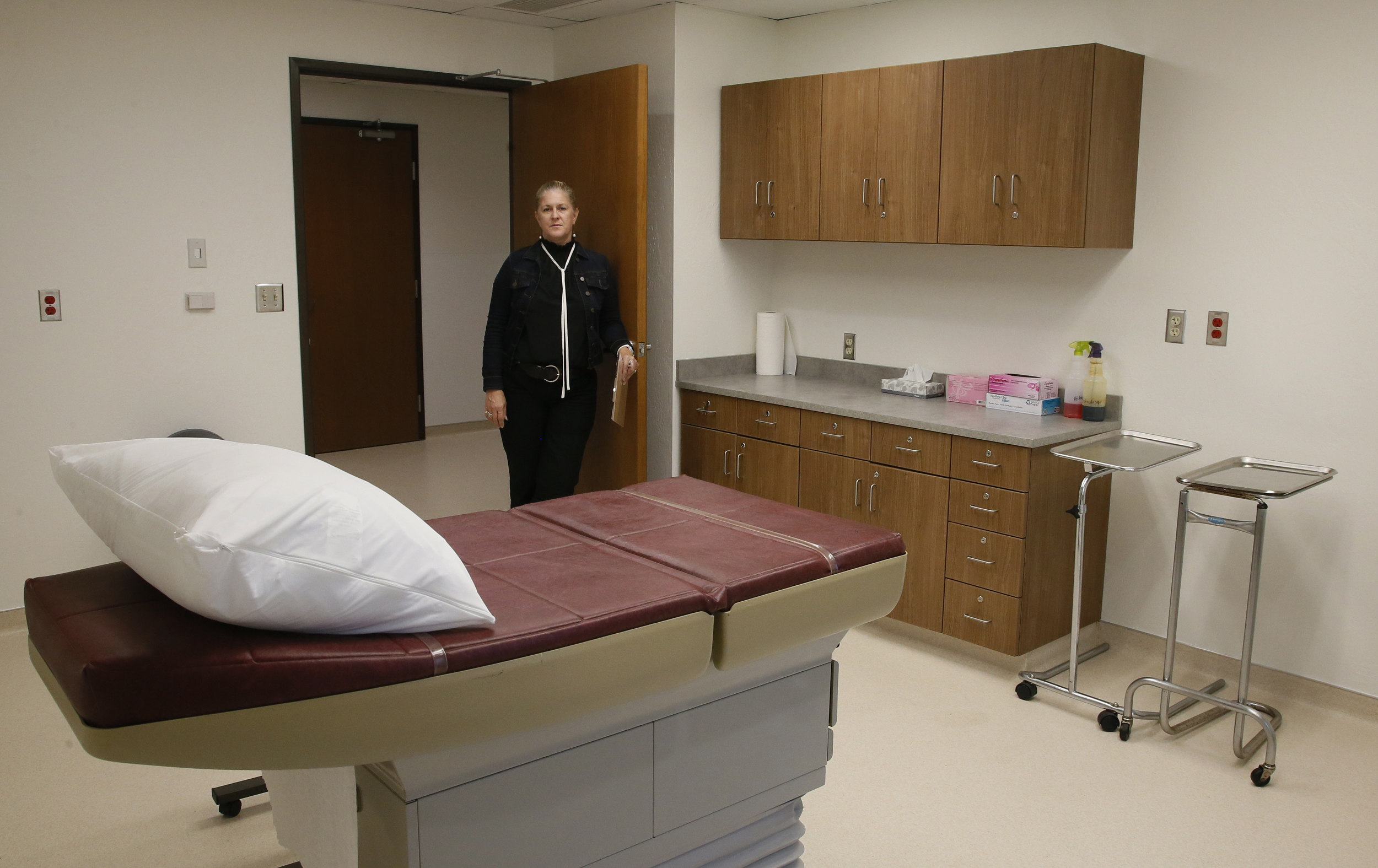 On Wednesday morning, Andrea Gallegos answered a call from a patient who was running late for her appointment at the Tulsa Women’s Clinic, one of four abortion clinics in Oklahoma.

But Gallegos, the clinic’s executive administrator, quickly realized that the woman had missed a message left for her the night before. On Tuesday, Oklahoma Gov. Kevin Stitt signed a law banning abortions after the detection of cardiac activity, which usually occurs around six weeks into a pregnancy.

“Unfortunately, I had to explain, ‘I’m so sorry … but you know, this law just passed,'” Gallegos said.

The woman guessed she was seven or eight weeks along.

“She said, ‘You know, I was raped, I’m pregnant because I was raped. Surely you can still help me.’ And I had to explain that unfortunately, this law makes no exception for rape or incest.”

The only exceptions to Oklahoma’s new law are for situations in which the mother’s life is in danger.

The legislation copies a similar law in Texas, which took effect in September. It allows private citizens to sue anyone who provides abortion care or helps someone obtain an abortion, and receive $10,000 for each suit that succeeds. Because it doesn’t empower the state to enforce the abortion ban, the policy skirts protections afforded under Roe v. Wade, the ruling that established the constitutional right to abortion. The Supreme Court declined to block the Texas law, although it allowed state-level lawsuits to proceed.

So on Tuesday evening, Gallegos was forced to hit the phones, calling patients on the schedule to “let them know that if there was detectable cardiac activity, we would not be able to see them.”

Oklahoma providers had been expecting the ban, but it hit harder, several clinic administrators said, given that the change came just a day after Politico published a leaked Supreme Court draft opinion that could overturn Roe.

The scramble to cancel appointments, support desperate patients and adjust to new restrictions in Oklahoma offer a preview of what’s likely to occur in the 13 states with so-called trigger laws. These policies would ban abortion outright if Roe gets overturned; Oklahoma and Texas both have such laws.

Gallegos said the woman on the phone Wednesday morning was in disbelief. So she offered her a free sonogram, just in case.

“We can check and see if there’s cardiac activity — maybe you’re not as far along as you think,” Gallegos recalled telling her. “But unfortunately, if there is cardiac activity, we will not be able to provide services.”

‘Patients are confused and scared’

Oklahoma performed around 3,800 abortions in 2020, according to data from the state health department. Until Tuesday, clinic administrators said, they’d been overrun with patients, especially because they had been taking many people from Texas.

Emily Wales, interim president of Planned Parenthood Great Plains, said that after Texas’ ban, her organization’s Oklahoma clinics went from scheduling abortions one week out to two to four weeks ahead because of increased demand.

“So few of our patients are under six weeks in their pregnancy,” Wales said.

Gallegos said that in her Tuesday calls, she spoke to a patient who had already driven halfway from Texas, since her appointment was in Tulsa the next morning.

“I had to explain to her that she’s just going to have to turn around and go home, because unfortunately, she felt she was over the limit. She’d made arrangements to be off work, made child care arrangements, rented a car,” Gallegos said.

Whereas other Oklahoma abortion clinics — those run by Trust Women and Planned Parenthood — either slowed or suspended abortion appointments over the past few weeks in anticipation of the new law, Tulsa Women’s Clinic tried to keep patients on the books “up until the end,” Gallegos said. But it made for heartbreaking conversations this week.

Pregnancy is measured from the first day of a woman’s last menstrual period — before she is actually pregnant — so Oklahoma’s law has forced patients to “hastily make these decisions that in no way require such haste,” said Christina Bourne, the medical director at Trust Women.

“Our call volume has gone down quite a bit, and that’s not to say that the need for abortion has gone down. It’s just very likely that patients are confused and scared,” Bourne said. Some patients, she said, have even asked if it’s legal to be speaking to an abortion provider on the phone.

Gallegos said at her clinic, the volume of patients has been cut in half this week.

The woman who called when running late on Wednesday never came in for a sonogram, she said.

Some Oklahoma clinics have started to direct patients to other states, like Arkansas or Kansas. Trust Women operates another clinic in Wichita, about a two-hour drive from its Oklahoma City location. But Bourne said she worries that some patients won’t be able to make that trip.

“That’s a tremendous hardship to ask somebody to drive an additional four hours roundtrip to get a pill,” she said.

Abortion restrictions disproportionately affect low-income people for whom travel is a financial hardship, and women of color, who face health care disparities and higher maternal mortality.

‘Already working in a post-Roe framework’

The close timing of Oklahoma’s law and the Supreme Court leak this week exacerbated chaos at abortion clinics in the state, Wales said.

“There’s an incredible amount of confusion for patients because they are understandably conflating what happened in the leaked opinion, which is getting all kinds of headlines and press coverage, and what happened at the local level in Oklahoma. Patients are asking if abortion is still legal anywhere,” she said.

Planned Parenthood’s Oklahoma locations continue to offer women’s health services but no abortions. Trust Women and the Tulsa Women’s Clinic, which both focus primarily on abortion services, plan to stay open to serve the patients they legally can. But the financial math of operating is already changing with significantly fewer patients.

If the Supreme Court does overturn Roe v. Wade — a decision is expected in late June or early July — all abortions would become illegal in Oklahoma unless the mother’s life is at risk. Shortly after signing the new law on Tuesday, Stitt tweeted that he wanted Oklahoma “to be the most pro-life state in the country.”

“We’re already working in a post-Roe framework and environment at this point,” she said, adding, “what is happening here is just a litmus test, an indicator for pure human rights violations that will come for the rest of the country.”

Wales, too, said the leaked Supreme Court draft has mostly reinforced what her staff had already been thinking: that Roe v. Wade “is not a reality in the part of the country we live in.”

For other parts of the U.S., though, she said, it might be a wake-up call.

“If you haven’t been paying attention [to] how hard it is to get an abortion in Texas, Oklahoma, Arkansas, this is the moment to realize this is happening,” Wales said. “This is real.”

If you or someone you know has been sexually assaulted, call the National Sexual Assault Telephone Hotline at 800-656-4673. The hotline, run by the Rape, Abuse, & Incest National Network (RAINN), can put you in contact with your local rape crisis center. You can also access RAINN’s online chat service at https://www.rainn.org/get-help.