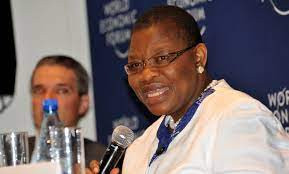 A former Minister of Education, Oby Ezekwesili, has called on the National Assembly to invite President Muhammadu Buhari to account for insecurity in the country.

Ezekwesili made the call while reacting to the recent beheading of a member of the Anambra State House of Assembly, Okechukwu Okoye by unknown gunmen.

Okoye’s head, without his body, was found days after it was abducted at Nnobi in Nnewi South Local Government Area of Anambra State on Saturday, May 21st.

“Perhaps, now that our @nassnigeria has seen that their fellow lawmaker in Anambra State could be barbarically mangled by criminals, they will finally have the spunk to INVITE the Commander-in-Chief of Nigeria’s Armed Forces @MBuhari to ACCOUNT for Numbing Insecurity in the Land.

I stopped bothering to ask @MBuhari to do ANYTHING when 3 consecutive times until last year, observing his complete dissonance from a FAILING COUNTRY, one just had to ask for a Mental and Physical Evaluation of his capacity to continue to function as @NGRPresident. That’s it.”