The youth wing of apex Igbo socio-cultural group, Ohanaeze Ndigbo, has written to the Attorney General of the Federation and Minister of Justice, Abubakar Malami, towards exploring a political solution to the continued incarceration of the leader of the Indigenous People of Biafra (IPOB), Mazi Nnamdi Kanu.

Newspot reports that Nnamdi Kanu is currently detained at a Department of State Service (DSS) facility and is facing treasonable felony charges preferred against him by the Federal Government of Nigeria.

In a letter dated November 12, 2021, signed by its acting national leader, Onwuasoanya FCC Jones, and addressed to Abubakar Malami, the youths maintained that dialogue remained the fastest way to resolve the current impasses if peace is the ultimate goal of the ongoing trial.

According to the youths, “without prejudice to whatever evidences the Federal Government may have against Mazi Nnamdi Kanu and other Igbo youths detained over their agitation for justice and equity in Nigeria, it is our well-researched opinion that dialogue would be the best and fastest way to resolve the current impasses. And if peace is the ultimate goal of the ongoing trial, then it would be fastest through political discussions”.

The group drew the attention of the President to the thousands of youths detained in different cells across Nigeria over their involvement in pro-Biafra agitations.

According to the Ohanaeze youth wing, “most of these youths were non-violent in their methods, and we would be pleased, if you may look into their cases with a view towards facilitating their immediate release from custody.

“We trust the leadership of our parent body and our governors are already in talks with the federal government on this and we look forward to having a positive outcome in the shortest possible time”.

The Igbo youth body, also reiterated its unrelenting commitment and resolve towards restoring lasting peace in the southeast, and as well as, convincing the agitators to sheath their swords. 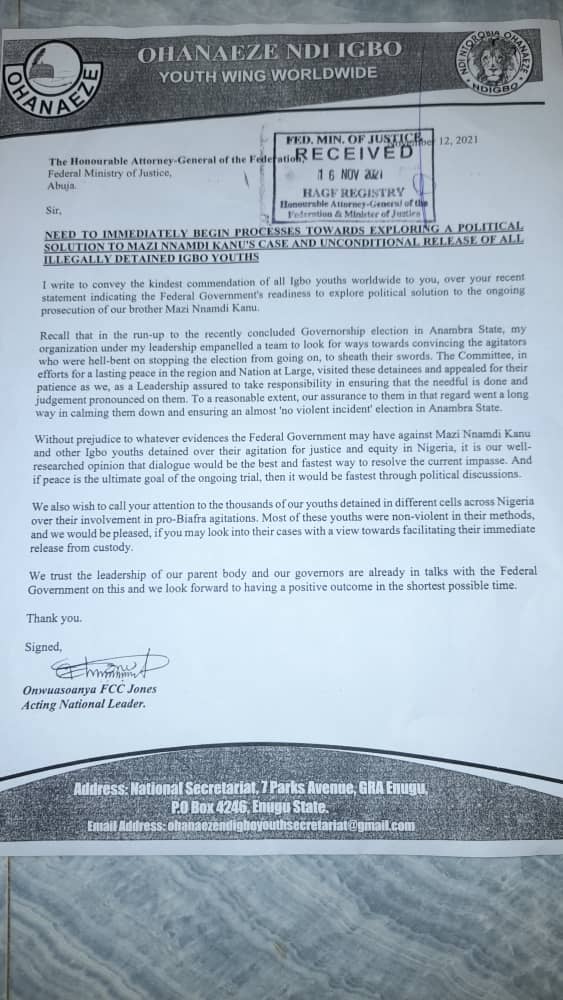