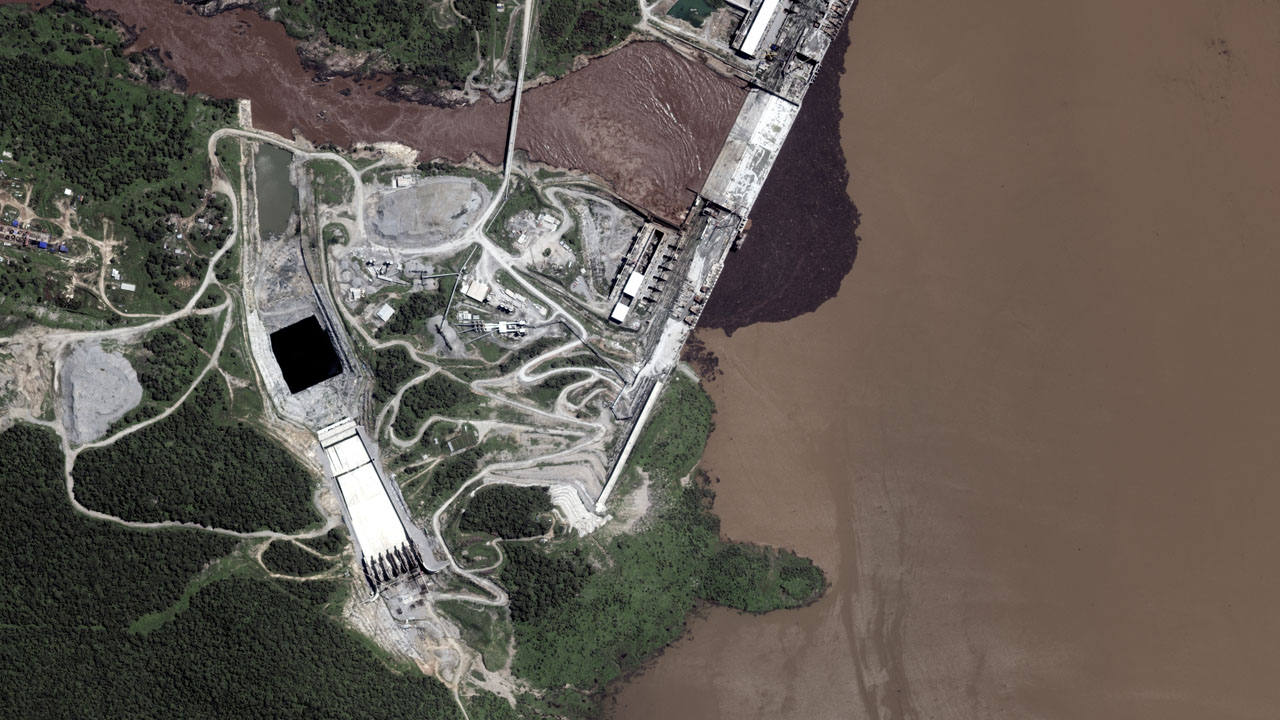 (FILES) In this file photo handout satellite image obtained courtesy of Maxar Technologies on July 21, 2020 shows a view of northwestern Ethiopia that focuses on the status of the Grand Ethiopian Renaissance Dam (GERD) and the Blue Nile River on July 11, 2020. – The United Nations Security Council is set to meet July 8, 2021, on Ethiopia’s mega-dam project, which has sparked fears in downstream Sudan and Egypt over their water supplies, diplomats said. Both nations have been pushing Ethiopia to ink a binding deal over the filling and operation of its Grand Ethiopian Renaissance Dam (GERD) on the Blue Nile that broke ground in 2011. (Photo by Handout / Satellite image ©2020 Maxar Technologies / AFP) /

The Grand Ethiopian Renaissance Dam (GERD) has drawn the ire of Egypt and Sudan since construction began in 2011, with both fearing for their water resources.

Ethiopia, which intends to continue the second phase of filling the hydroelectric dam’s reservoir in July and August, contends that the project is vital for the energy needs of its 110 million-strong population.

“To reach an optimal agreement, trust, transparency and open engagement will be key,” she said at the meeting, organized at the request of Tunisia on behalf of Cairo and Khartoum.

While progress has been made in many areas of the negotiations, consensus “has not been reached regarding some critical aspects, including: arrangements for the management of protracted drought; development upstream and downstream of the GERD; and a dispute resolution mechanism,” the official said.

Egyptian Foreign Minister Sameh Shoukry said the dam was an “existential threat” to Egypt, calling for “a legally binding agreement that enables Ethiopia to achieve its developmental objectives.”

The members of the Security Council encouraged the three countries to overcome their differences towards an agreement under the aegis of the African Union.

But the AU’s management of the crisis is at an impasse, Shoukry said, calling for the council to adopt a draft resolution proposed by Tunisia.

The document, obtained by AFP, would require a settlement of the dispute within six months, and for Ethiopia to stop the filling of the reservoir of the dam.

“If its survival is imperilled, Egypt will be left with no alternative but to uphold and protect its inherent right to life that is guaranteed by the laws,” Shoukry said, without giving further details.

His Sudanese counterpart, Mariam al-Sadeq Al Mahdi, said Khartoum was “asking for help” from the Security Council to find a legally binding agreement.

Silence would be interpreted as a green light for Ethiopia to continue filling the reservoir, she warned.

Set of challenges
Ethiopia’s minister of water and irrigation, Seleshi Bekele Awulachew, representing the country at the meeting, said Cairo and Khartoum’s objections were “not directed against GERD but rather aim to stop all use of water by Ethiopia.”

The UN envoy for the Horn of Africa, Parfait Onanga-Anyanga, called on “all parties to deal with the issue constructively and to avoid any statement that would increase tensions in a region already facing a series of challenges.”

“Each of the countries sharing the waters of the Nile has both rights and responsibilities, and the use and management of this natural resource requires the continued commitment of all the nations involved, in good faith, with a view to achieving a common ground,” he argued.