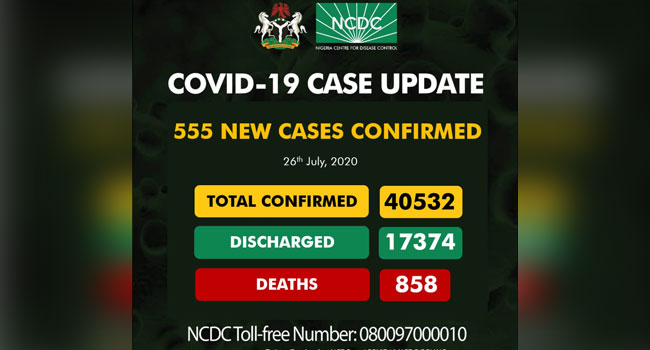 Nigeria has now confirmed more than 40,000 COVID-19 cases, according to the Nigeria Centre for Disease Control (NCDC).

Since February 27 when the first case of the virus was confirmed in Nigeria, the country has witnessed a steady rise in infections despite efforts to curtail its spread.

Late on Sunday, the NCDC confirmed an additional 555 cases and two deaths, lifting total infections in the country to 40,532 and fatalities to 858 from Friday’s figures of 39,977 and 856, respectively.

With daily infections in the country now averaging more than 500 cases added to repeated complaints about people across states failing to comply with protocols, there have been concerns about the effectiveness of current measures to tackle the pandemic and speculations that the Federal Government may have to impose tougher measures, including re-imposing lockdowns.

The government has, however, not indicated any plan of re-imposing a lockdown although officials have warned Nigerians about the dangers of violating safety protocols and urged citizens to take individual responsibility seriously.

Nigeria had reacted to the pandemic by restricting large gatherings, shutting down schools, religious gatherings and flight operations, and imposing a lockdown in Lagos and Ogun States, as well as the Federal Capital Territory, among other things.

A lockdown was later imposed in Kano State with state governors taking (complementary) measures of their own.

In May, after some five weeks of the lockdown, the Federal Government modified its strategy in what it said was the second phase of response.

Schools have remained closed with talks about a resumption date sparking debate and controversy, but domestic flights have resumed.

The Minister of Aviation, Hadi Sirika, said last week that international flights may resume before October and on Saturday, the Minister of Transport, Rotimi Amaechi, said train services will resume on the Abuja-Kaduna railway line on July 29.

Some eight months after the COVID-19 outbreak started, disrupting life, the global economy remains on the ropes with world leaders scrambling to find solutions.

The Nigerian economy is not left out.

As part of the government’s push for a concerted response, President Muhammadu Buhari has called on Nigerians in the Diaspora to support the country’s economic recovery efforts.

Commending Nigerians in the Diaspora for their economic and social contributions on World Diaspora Day, he said, “Nigerians in Diaspora are also known to be engaged in skills transfer in ICT and industry. They are also active in our universities as lecturers and in carrying out medical missions.”

The President added, “It is, therefore, my sincere hope that even with the depressed economy due to the COVID-19 pandemic, Nigerians in the Diaspora will rise to the occasion of not abandoning their country of origin, Nigeria, but be active in our post-COVID-19 recovery efforts.”

See the case summary of the disease below:

Chisom Winifred: For the Stuck and Confused Creative