Players from the women’s football team in the Minawao refugee camp attend an Africa Cup of Nations (CAN) match between Nigeria and Sudan in Garoua on January 15, 2022. The girls, ranging in age from 15 to 20, fled with their families to Cameroon years ago, as Boko Haram jihadists wreaked havoc in their country. Daniel Beloumou Olomo / AFP

Words are not enough to describe the fun and passion in their eyes as Nigerian refugee girls cheer on their side at the Africa Cup of Nations.

The girls, ranging in age from 15 to 20, fled with their families to Cameroon years ago, as Boko Haram jihadists wreaked havoc in their country.

At a refugee camp in Minawao, in Cameroon’s Far North region, the girls took up football, forming a team with whatever equipment came to hand.

READ ALSO: Nigeria To Play Tunisia In AFCON Second Round 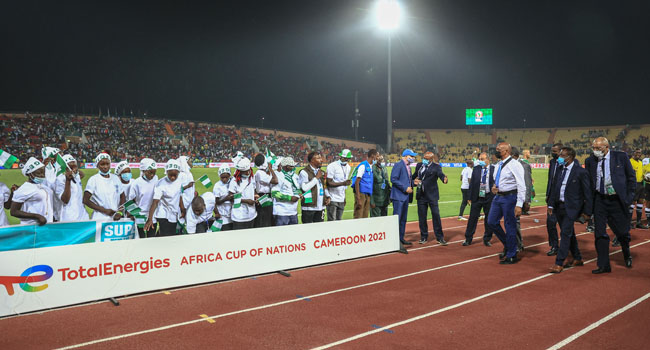 President of the Confederation of African Football Patrice Motsepe (3rd R) greet players from the women’s football team in the Minawao refugee camp while they attend an Africa Cup of Nations (CAN) match between Nigeria and Sudan in Garoua on January 15, 2022. Daniel Beloumou Olomo / AFP

Last weekend, thanks to an initiative of the UN refugee agency UNHCR, the girls got the treat of their lives: they were taken to a match between Nigeria and Sudan.

They boarded a bus on Friday for the 200-kilometre (120-mile trip) and spent the night in a hotel — a totally new experience for them — before heading to the stadium in Garoua on Saturday.

As they left, the girls stopped at the hotel entrance, coquettishly checking their reflections in the glass.

En route to the match, they marvelled at the hordes of Nigerian fans flocking to the stadium.

In the event, Sudan put up little resistance, scoring only one goal to Nigeria’s three.

With each goal, the refugee girls erupted in joy, dancing and waving little Nigerian flags.

In an added treat afterwards, the girls were invited to pose on the field with officials of the African Football Confederation.

“It’s so incredible. I’m so happy,” enthused 20-year-old Salamata Timothy, with stars in her eyes. 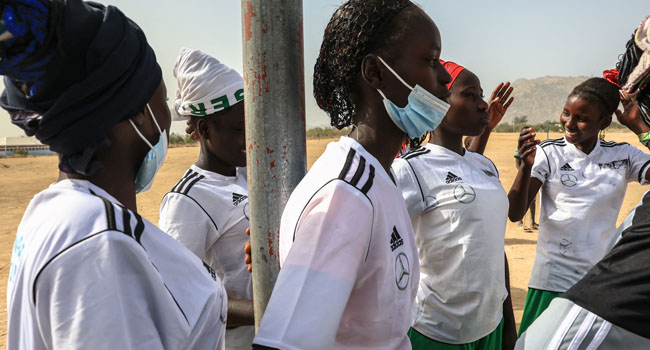 Nigerian refugee girls wait the beginning of the training at the football pitch in the Minawao Refugee camp in Maroua, on January 16, 2022. Daniel Beloumou Olomo / AFP

The next day the girls returned to the Minawao camp, greeted as heroines by hundreds of children who had seen them on television.

The camp, the largest in the region, opened in July 2013 at the height of the Boko Haram insurgency, which prompted a massive influx of Nigerians into Cameroon.

Today, housing some 70,000 people, it resembles a little city, with a hospital, several schools, a dispensary and even a market some 50 kilometres (30 miles) away where the refugees sell produce from their farm plots and can buy merchandise from home.

The camp’s football pitch is an expanse of compacted earth with blue-coloured goals at either end.

Saratu Yakubu, 19, said that when she arrived in 2013, the players had jerseys and shoes, but they no longer have proper equipment.

“It’s become nearly impossible to play even though it is so important for us, for our health and well-being,” she said.

A recent donation from the German government financed jerseys and balls for the boys, but there was nothing for the girls. 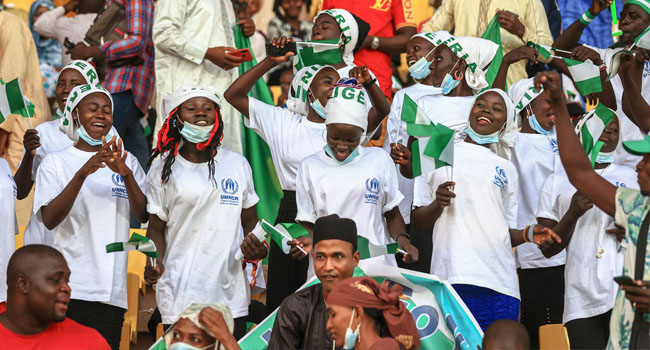 Players from the women’s football team in the Minawao refugee camp attend an Africa Cup of Nations (CAN) match between Nigeria and Sudan in Garoua on January 15, 2022. Daniel Beloumou Olomo / AFP

Luka Isaac, who represents the Minawao refugees, told AFP: “Going to the stadium was an unforgettable experience for these girls. They realise that they can dream too. Most arrived here as children and it was the first time they left the camp.”

He regretted that they do not have enough equipment. “Football gives them something to think about besides what they suffered in Nigeria.”

UNHCR spokesman Xavier Bourgeois noted that now that the crisis seems to be abating in Nigeria, “the big donors are starting to forget” about the refugees.

Lucy Bitrus, 18, one of the footballers in Minawao, sews sheshias — headgear worn by local men — which she hawks at the market. Her mother sells cakes and her father is a monitor at the school.

She sleeps on a straw mat on the earthen floor and does her schoolwork using a solar-powered light. Her “favourite possession” is a biology book. The only decoration in her room is a chemistry chart — the periodic table of the elements.

“My dream is to become a doctor,” she said, speaking wistfully of going to university some day. “We don’t just need footballs here — we also want books.”