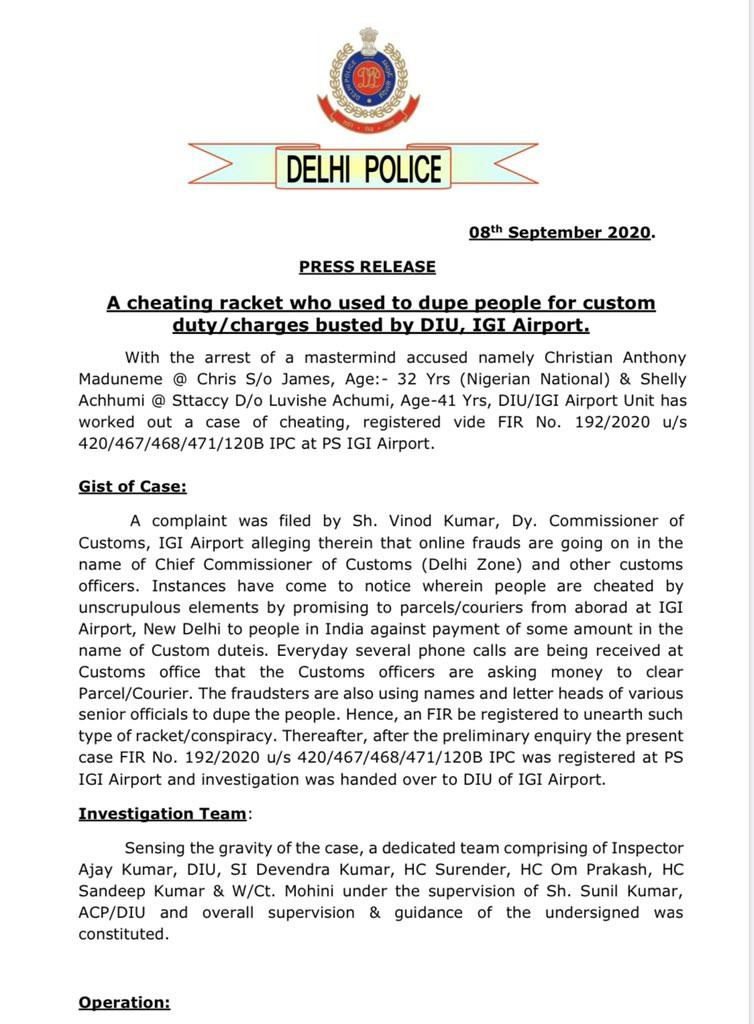 Two persons, including a Nigerian man, have been arrested for allegedly duping people of lakhs of rupees by impersonating customs officials at the Indira Gandhi International Airport, the police said on Tuesday, September 8.

The Nigerian national, identified as Christian Anthony Maduneme (32), was staying in Noida. His associate, Shelly Achhumi (41), hails from Nagaland.

Two laptops, seven mobile phones, SIM cards, pass books, eight ATM cards were retrieved from the accused and efforts are being made to trace their other accomplices, police said.

They said a probe was launched after receiving complaint from Vinod Kumar, Deputy Commissioner of Customs, IGI Airport, alleging that several phone calls were being received at the customs office on a daily basis, claiming that customs officers are asking for money to clear parcel and courier. The accused used names and letter heads of various senior officials to cheat the people.

Senior police official (Airport) Rajeev Ranjan said, “During investigation, we collected all relevant information. On September 6, Shelly Achhumi, who had accounts with HDFC and ICICI banks, was traced and later arrested. She provided her account information to dupe the targets of the money by charging 8 per cent commission from the other accused.”

She used to work in an NGO but had no source of income since the coronavirus-triggered lockdown came into force. She started providing her bank account details to only fraudsters to gain commission, he said.

The officer said Shelly Achhumi would befriend the target before cheating them. In one of such cases, Shelly contacted the victim through a matrimonial site and got the personnel mobile number, Facebook ID and WhatsApp number of one Subir Bose.

Shelly started contacting the malev ictim over the phone. She used the fake identity of Anita Saha (from Amsterdam) and said she desired to visit India for marriage-cum- tourism purpose.

Upon arrival in India, she told him that she had been intercepted by Custom officials at the IGI Airport for carrying articles and jewelleries beyond the permissible limit. Maduneme then posed as custom officials and directed the victim to pay a custom fee of ? 47,900 and other subsequent amount in Indian bank accounts. Later, the accused demanded more money on different grounds, Mr Kumar said.

The target ended up depositing huge amounts of money in different Indian bank accounts as provided by the gang members. The accused have duped the victim in excess of ? 69 lakh so far, he said.

Dr. Dre back in the studio days after his release from hospital for brain aneurysm (Photo)

Buhari, Osinbajo To Spend N3.4bn on Feeding, Traveling In 2021

One In Every Five Persons Tested Last Week Was Positive –...