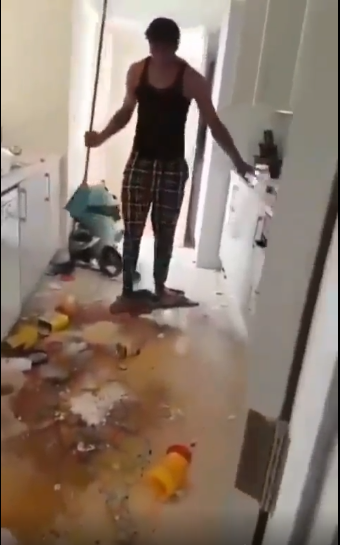 A video making rounds online captured moment a Nigerian boy identified simply as “Chidera”, scattered his parents’ apartment because he wasn’t given what he asked for.

The mother of the boy who shared her own side of the story in the video, said he demanded for some documents including her passport which he claimed he needed for a university program. However one of the eyewitnesses stated that he doesn’t need any of the documents he demanded for.

The boy’s mother added that after she ignored him, he forcefully took her documents which she retrieved. He subsequently began breaking things in the house and also pouring food items on the floor.

When asked why he scattered his parents home by one of those who turned up at the scene of the incident, the boy replied by saying “he will get his mother’s attention by scattering the house”.

These are The Music Albums Gave Us Happy Moments in 2020…

US: Biden Reverses Travel Ban Imposed On Nigeria, Sudan, Others By...

Take a Moment to Enjoy the Beauty of Yoruba Culture with...