Former Minister of Aviation and chieftain of the People’s Democratic Party (PDP), Femi Fani-Kayode has reacted to the Nigerian army’s claim of the Lagos state government inviting them to restore law and order.

In a tweet he shared, the former minister stated that the Nigerian army’s disclosure has grave implications for Governor Babajide Sanwo-Olu. According to Fani-Kayode, the Lagos state Governor has been thrown under the bus by the military.

The @HQNigerianArmy claim it was the LASG that asked for soldiers to be deployed at Lekki. The implications of this for @jidesanwoolu  are grave. He has been thrown under the bus by the military. 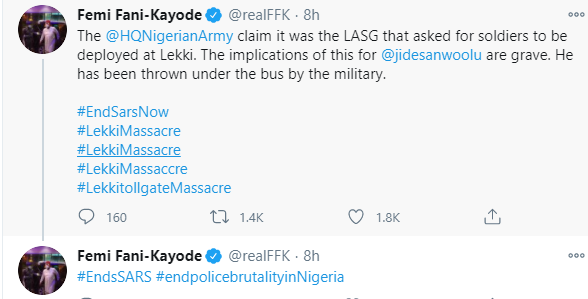