A file photo of an NCDC official and two others on duty.

Nigeria’s death toll from Lassa fever has risen to 40 after more infected patients lost the battle to the disease.

The Nigeria Centre for Disease Control (NCDC) disclosed this in its latest situation report on the management of the outbreak of the disease in the country.

Data from the report indicate that six new deaths were recorded in Week 4 covering January 24 to January 30.

The agency added that 229 suspected cases were reported from 16 local government areas across five states last week, but only 42 of them were confirmed.

“In Week 4, the number of new confirmed cases decreased from 74 in week 3, 2022 to 42 cases. These were reported from Ondo, Bauchi, Edo, Enugu and Delta States,” it said.

“The predominant age-group affected is 21-30 years (Range:1 to 80 years, Median Age: 30 years). The male to female ratio for confirmed cases is 1:0.8. The number of suspected cases has increased compared to that reported for the same period in 2021.”

While there was no new healthcare worker reported to have been infected in reporting week 4, the NCDC said it has activated the national Lassa fever multi-partner and multi-sectoral Emergency Coordination Centre (EOC) to coordinate response activities at all levels.

It explained that it has also sent Lassa fever alert letters to states, in addition to carrying out preparedness assessment for the 36 states and the Federal Capital Territory (FCT). 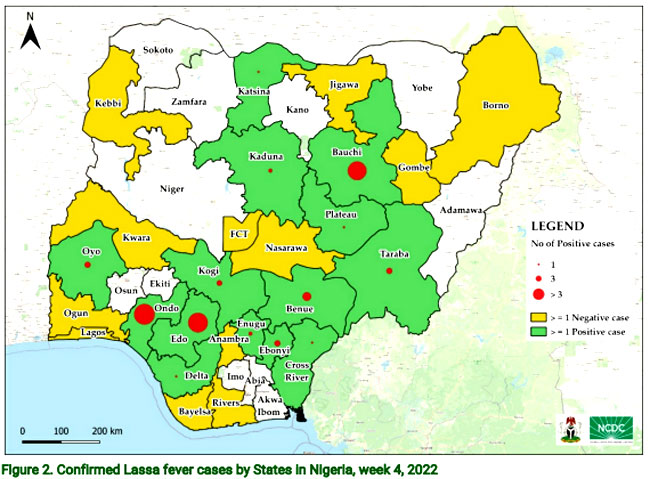 According to the agency, the seven Lassa fever molecular laboratories in its network are working full capacity to ensure all samples are tested, and results are provided within the shortest turnaround time.

It said confirmed cases were treated at identified treatment centres across the states while risk communications and community engagement activities have been scaled up using television, radio, print, social media and other strategies.

The NCDC stated specifically that National Rapid Respond Teams (NRRTs) have been deployed to the FCT, as well as Nasarawa, Edo, Ondo, Bauchi, Ebonyi, Oyo, Taraba, and Benue States.

Lassa virus is transmitted to man by infected multi-mammate rats and humans become infected from direct contact with the urine and faeces of the rat carrying the virus.

It is an acute viral illness and a viral haemorrhagic fever contracted by touching soiled objects, eating contaminated food, or exposure to open cuts or sores.

Secondary transmission from person to person can also occur as a result of exposure to the virus in the blood, tissue, urine, faeces or other bodily secretions of an infected patient.