Nigeria’s forward Samuel Chukwueze (C) celebrates with teammates after scoring the opening goal during the Group D Africa Cup of Nations (CAN) 2021 football match between Nigeria and Sudan at Stade Roumde Adjia in Garoua on January 15, 2022. Daniel BELOUMOU OLOMO / AFP

The Super Eagles on Saturday put up a strong performance to beat Sudan 3-1 in their second match at the 2021 Africa Nations Cup being held in Cameroon.

The Eagles have now qualified for the Round of 16 regardless of what happens in the other remaining Group D games.

After beating Egypt in their first game, many Nigerians were hoping the Eagles would outclass their North African counterparts. They did not disappoint.

Samuel Chukwueze opened the scoring as early as the third minute with a clinical finish before a set-piece saw Taiwo Awoniyi fortuitously head into the net on the stroke of half-time.

Nigeria began the second half as they finished the first. Moses Simon, who was later announced as the Man of the Match, went on one of his daring runs to finish past the stranded Sudanese goalkeeper in the 46th minute. 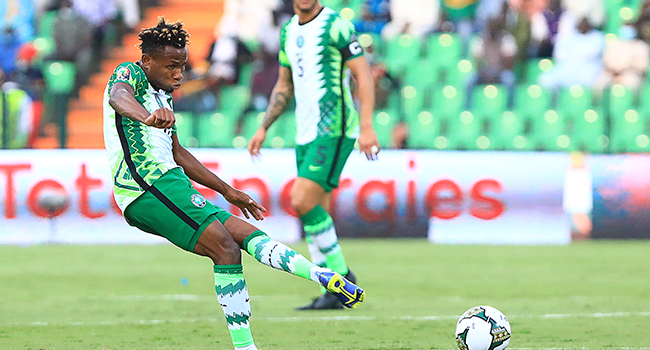 Although Sudan pulled one back in the 70th minute after Ola Aina was adjudged by VAR to have been guilty of a foul in the 18-yard box, the Falcons of Jediane never really threatened the Super Eagles’ dominance for the rest of the game.

Nigeria now face Guinea-Bissau in the final group game on Wednesday and will only need a draw to finish top.

William Troost-Ekong, the Nigeria captain, saw his volley kept out superbly from a free-kick, and Sudan rode their luck again moments later when Joe Aribo hit the post and Simon poked the rebound against a defender sat on the line. 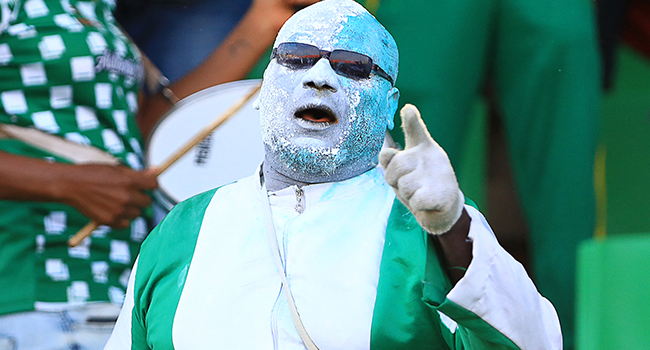 A Nigeria supporter cheers prior to the Group D Africa Cup of Nations (CAN) 2021 football match between Nigeria and Sudan at Stade Roumde Adjia in Garoua on January 15, 2022.
Daniel BELOUMOU OLOMO / AFP

Nigeria grabbed a second goal in slightly fortunate circumstances as Troost-Ekong headed Kelechi Iheanacho’s cross against a defender, the ball ricocheting off the head of Awoniyi and squirming in under the keeper.

Simon all but secured the victory 34 seconds after half-time when he combined with Awoniyi before tapping home after bursting into the area.

Sudan cut the deficit 20 minutes from time when they were awarded a penalty following a VAR review as Aina was punished for a foul on Mustafa Mohammed, with Khidir tucking away from the spot.