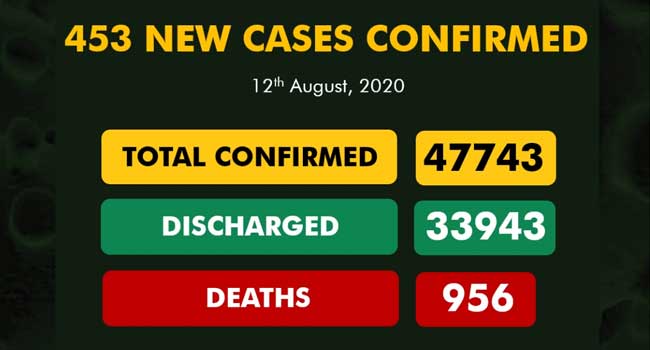 Nigeria has recorded 453 new cases of coronavirus, bringing the total number of COVID-19 infections in the country to 47,743.

The Nigeria Centre for Disease Control (NCDC) disclosed this on Wednesday night via Twitter.

Giving a breakdown of the figures, the health agency said the new cases were recorded in Lagos, the FCT and 14 other states of the federation.

While Lagos topped the list with 113 cases, the FCT came second with 72 new infections.

On a positive note, the country has been able to manage 33,943 people who recovered from the virus and have been discharged.

Unfortunately, 956 people have died from COVID-19 in Nigeria.

Here are the latest developments in the coronavirus crisis:

The pandemic has killed at least 743,199 people worldwide since surfacing in China late last year, according to a tally from official sources compiled by AFP at 1100 GMT on Wednesday.

At least 20.3 million cases have been registered in 196 countries and territories.

Britain’s economy contracts by an unprecedented 20.4 per cent in the period from April to June, far worse than any of its European neighbours.

“It is clear that the UK is in the largest recession on record,” says the Office for National Statistics, which compiles the data.

“Hundreds of thousands of people have already lost their jobs, and sadly in the coming months many more will,” says finance minister Rishi Sunak

Parliament was due to be dissolved to allow the election to take place, but Ardern is holding off the move until Monday to monitor how the crisis evolves.

But Philippine President Rodrigo Duterte will be a guinea pig for the controversial vaccine, his spokesman says, as the Southeast Asian nation emerges as a frontrunner for overseas clinical trials.

Beijing eases entry restrictions for nationals from 36 European countries, months after almost all foreign nationals were forbidden from entering the country.

Italian regions including Puglia and Campania begin to order new periods of quarantines for people returning from higher-risk European countries including Spain and Greece in a bid to stem new outbreaks.

The wearing of face masks in public is compulsory in the Brussels region, regional authorities announce. Face masks are already required in most closed public spaces for people aged 12 and over but the measure now extends to the 19 municipalities of the Brussels region.

This year’s Paris marathon has been cancelled because it is impossible to hold it during the pandemic, organisers say, having previously moved the race from the original date of April 5 to November 15. It joins a long list of elite marathons worldwide to be cancelled this year.

Barcelona says one of its players has tested positive but he has not been in contact with the squad travelling to Lisbon for their match against Bayern Munich.

Asia’s upcoming qualifiers for the 2022 World Cup and 2023 Asian Cup football have been postponed to next year, officials say, without announcing new dates.