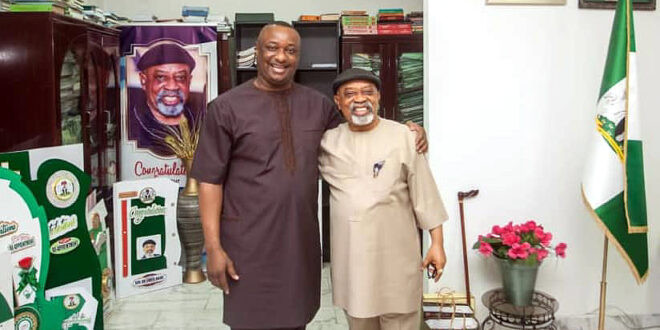 The Minister who tendered the apology during a courtesy visit to the President of the Senate, Ahmad Lawan on Tuesday July 7, stated that the position canvassed by Keyamo in his widely circulated letter on Monday is not sacrosanct.

“We deeply regret the incident that happened at the last visit, the altercations that followed it between my Minister of State and members of the joint committee.

“Therefore, we decided that as a team we will come in full force and give you the necessary information that you will need so that we can fast-track this programme.

“Today in the 9th Senate we are enjoying a good and robust relationship with the legislature and we do not want some of us who have passed through this institution will do everything that is possible to maintain that relationship.

“Therefore, Mr Senate President, I apologise on behalf of the Ministry for what took place at the last time and I hope that this apology will be taken by the members of the Committee and the entire National Assembly because I am aware and I know that a committee is a representative of the whole.

“The Committee room is an extension of our hallowed chambers over there like the plenary chambers. I therefore, request that we forgive and forget.

The Senate President Ahmad Lawan on his own part affirmed that all previous actions already taken on the programme by Keyamo are “null and void” and the process must start afresh.

“For me this is an opportunity to say the home truth…our committees were right to request for explanation on the modalities. We stand by our committees and we are in support of the suspension of the programme.

“In fact, any action taken before now is null and void. You are now going to start it all over. You said there is need for a fresh start. This is going to be a fresh air.

“I want to assure you Honourable Minister that we are going to support you all the way to ensure that the programme is successful but you don’t have our support if the Ministry ventures into it. We will continue to insist that the Ministry should have no role more than supervision of this programme.

“If the Ministry goes ahead that means the ministry is breaking the law because the budget is law.

“So we are on the same page and I want to thank you for your intervention. A harmonious relationship between the standing committees of the National Assembly and our MDAs is the responsibility of both sides.”

Keyamo who was part of the entourage that visited the Senate President had however alleged that there are plans to bypass him on the recruitment programme.

The Minister insisted that the National Assembly’s directives on the execution of a project is not binding on him and will be sent to the Attorney-General and Minister of Justice, Abubakar Malami for interpretation. He added that he will approach the President for his final say on the matter.

“First of all, may I say that this Distinguished National Assembly, I believe that they are the lawmakers and they desire to comply strictly with the provisions of the law.

“Now, it is important that all of you read the National Directorate of Employment Act. You can see that the whole struggle today has been how to bypass me in the execution of this programme and I’m sure that you all saw that.

“Now with the provisions of the law, how they are going to do that, I don’t know, I have to go back to my principal which is the President of the Federal Republic of Nigeria of Nigeria to give directives.

“When you say go back and bring a plan, you are still coming back to me. Secondly, if you look at Section 15 of the NDE Act, it said the minister may give directives of a general nature to the NDE.

“In other words, you cannot have a work plan without coming back to the minister.

“The third point is that by virtue of my appointment as a minister, the President gave a directive in October last year saying that I should go and supervise generally the activity of the NDE.

“I don’t see how you will supervise an agency and they go ahead without approval, the buck must stop at a table.

“The fourth one, beyond the general mandate the President gave, the President also specifically instructed me by memo in May this year for me to go and supervise the execution of this project.

“How can you supervise a project without your final approval. That approval lies on my table.

“Section 16(1) of the NDE Act by instruction of the President, an inter-ministerial committee has already been proposed – which we accepted – that the committee must drive the selection process.

“So when you say go back and bring a plan, are you asking the DG to go and break the law?

“I will go back to the President for directives. The directives as to execution of a project is not binding on me.

“The directives of the National Assembly is not binding on me. This is an issue that will go to the Attorney-General at the end of the day for interpretation.”