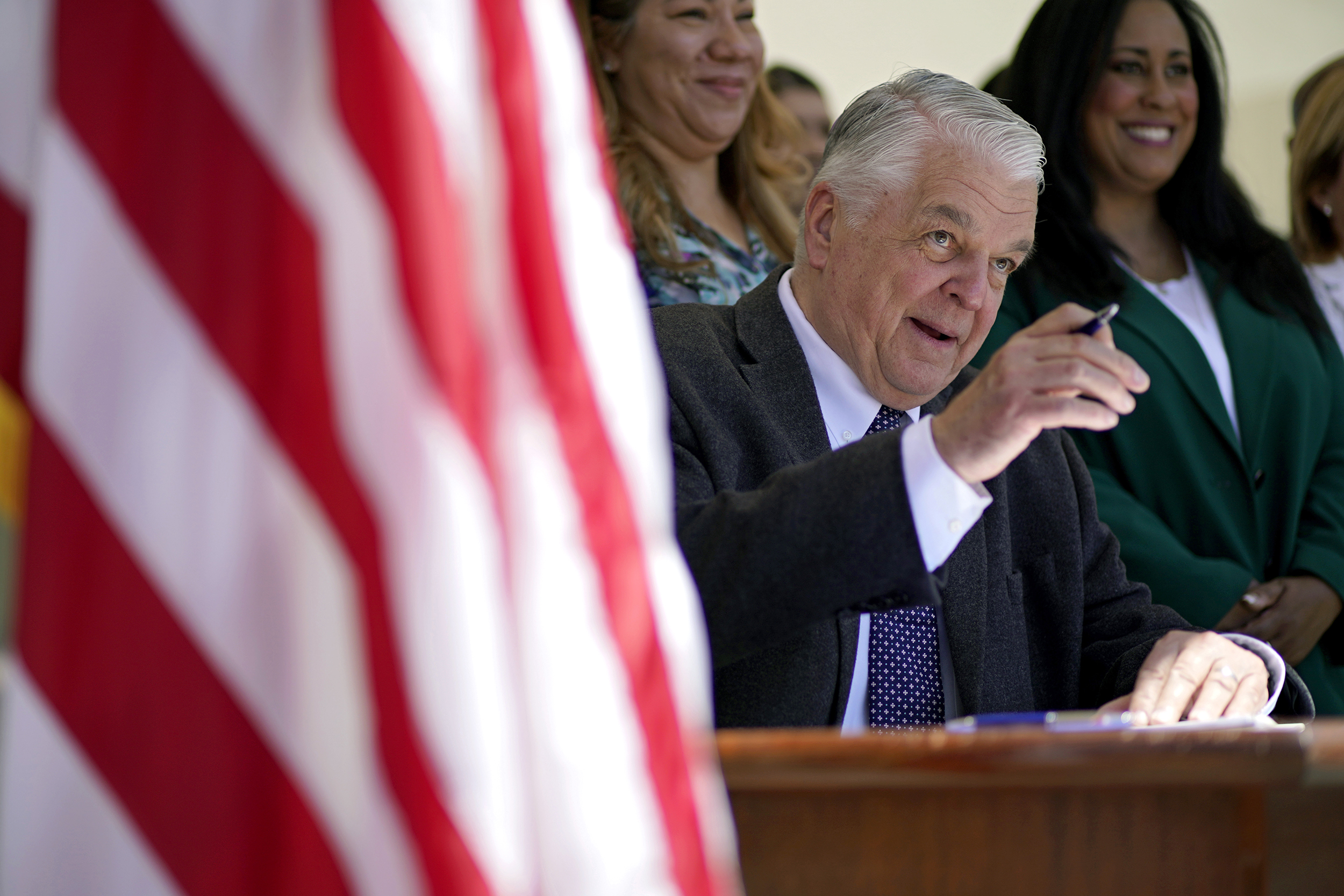 LAS VEGAS — Nevada Democrats fiercely want to host the first-in-the-nation presidential primary and they’re making a coordinated push like never before to remove the primacy of New Hampshire and Iowa.

They’ve printed out brochures promoting their state, sent letters to key members of the Democratic National Committee and lobbied them in person.

The problem? Those efforts have left some of their early-state competitors fuming.

One DNC member from a state with an early contest, who asked not to be named because they were not authorized to speak on the matter, accused Nevada leaders of going back on an informal commitment by delegations from four early states to hold off on lobbying for first-in-the-nation status in the presidential primary.

The member described a meeting among leaders of four early states at the Hilton Hotel in Washington in March during which members from the four states — Iowa, New Hampshire, Nevada and South Carolina — agreed to hold off on trying to jump in front of others in the process, at least until the DNC’s Rules and Bylaws Committee had ironed out a new framework.

Little more than 12 hours later, Sen. Jacky Rosen, D-Nev., “was working out of a hotel room meeting with individual members of the [committee] trying to convince them Nevada should be first,” the member said. Two others who attended the meeting confirmed the member’s narrative.

Rosen, who did not attend the early state meeting, had distributed a glossy Nevada promo brochure as a way to advance Nevada’s argument. That move, however, irked other early state officials who believed the state was going back on its agreement.

“The other early states were stunned by Nevada’s behavior,” the member said. “Lying in poker may be a winning play in Vegas, but lying in politics only leaves you friendless.”

“It was playing politics at a time when the team from Nevada didn’t need to do that,” a second person who attended said.

Artie Blanco, Nevada’s member of the DNC’s Rules and Bylaws committee, who attended that meeting, was surprised by the blowback, saying she had a completely different take on the conversation.

“I’m taken aback that this sounds like some kind of personal attack, when it’s not about that, when I’ve shown support for all four states,” Blanco said Tuesday night. “That’s not how I interpreted that conversation. This is not against any states but it’s also clear that our law was passed last year.”

In an interview last week, Rosen stressed that Democrats in her state were working in unison on the bid.

“This has been a team effort to push Nevada to be first in the nation,” Rosen said in an interview.

The late Sen. Harry Reid, who built a powerful political machine in the state, had fervently advocated for the party to oust Iowa’s caucuses and New Hampshire’s primary from their longtime lead-off perches of the Democratic presidential primary. That was after Reid in 2008 muscled Nevada into the early state primary lineup to become the first Democratic primary in the West.

“I think after these four cycles it’s time for us to be first in the nation,” Rosen said.

The entire Nevada Democratic congressional delegation, along with Gov. Steve Sisolak, sent a letter recently to members of a key DNC panel laying out Nevada’s case to become the first-in-the-nation state, according to a copy obtained by NBC News.

Demonstrating the amount of political heft they’d put behind their bid, Sisolak, Sens. Rosen and Catherine Cortez Masto, as well as Reps. Susie Lee, Dina Titus and Steven Horsford, laid out Nevada’s political strengths in a letter sent to members of the Rules and Bylaws Committee.

“As a highly competitive battleground with strong union representation and one of the most diverse electorates in the country, our state offers a real test of who can put together a winning coalition,” according to the letter, which was sent earlier this month.

The issue comes as the DNC inches closer to sunsetting Iowa’s 50-year tradition of holding first-in-the-nation caucuses and possibly nixing New Hampshire’s spot as the first full primary. Iowa damaged its reputation with severe problems compiling the caucus vote in 2020, and the party is re-evaluating the outsize influence on the presidential nomination given to two mostly white states.

States wanting to be in the early window must now reapply for their position, and four of the earliest — Iowa, New Hampshire, Nevada and South Carolina — are prepared to make arguments for either staying within the early window or going first.

Nevada’s diversity — specifically a Latino population that’s exploding in growth — is its biggest selling point, particularly given Democrats’ battle to hold onto a group of voters increasingly courted by the Republican Party. Unlike Iowa or South Carolina, which are solidly red states, Nevada is a battleground state with key competitive races, and that means a well-financed, high-profile primary could jump-start the organizational and messaging general election, Nevada Democrats argue.

They also point to the smaller size of the state and the fact that it has just two media markets, which avoids pricing out everyday candidates.

“It’s important to just get it started to have people understand that when they run for election or re-election, they still have to be responsible to a diverse group of constituents,” Rosen said.

The DNC panel meets Wednesday to hash over a new framework for states that want to apply to be first-in-the-nation. A draft resolution setting out new criteria seems tailor-made for Nevada. It favors primaries instead of caucuses (Nevada just dropped its caucuses to shift to a state-run primary), seeks population diversity, favors a state that elects Democrats in the general election and one that has a “fair and sound electoral process,” according to the draft.

“There is a feeling within all Democrats in Nevada that the stars have aligned. Now is the time that we can actually make this type of change,” said Blanco. “We’ve earned the right to kick off the process.”

Las Vegas is also in the running to host the 2024 Democratic National Convention, but that’s taken a backseat to the first-in-the-nation push, according to interviews with more than a dozen Democrats here.

There’s a recognition between alienated factions of the Democratic Party here that the split in their party could be their Achilles’ heel in their quest to land the bid. That division played out a year ago when Judith Whitmer, a supporter of Sen. Bernie Sanders, and her slate of Democratic Socialists took over the state party. The establishment Democrats moved their fundraising and staff from Las Vegas to Washoe County, a swing county that includes Reno.

Whitmer said in recent weeks she’s been in contact with Blanco over the next steps for the first-in-the-nation bid.

“Nevada is a battleground state, which is also another advantage for the party,” Whitmer said in an interview. “If you have a good gauge of how candidates — what kind of reaction they get from people here — that’s a good gauge of what you’re going to get across the country.”

Chris Roberts, a Democratic Socialist who is chair of the Clark County Democratic Party, noted the ability for different spectrums of the party to get behind the effort.

“Whatever ideological differences there might be,” he said, “there’s not a divide that’s so deep that we’re not unified on this.”