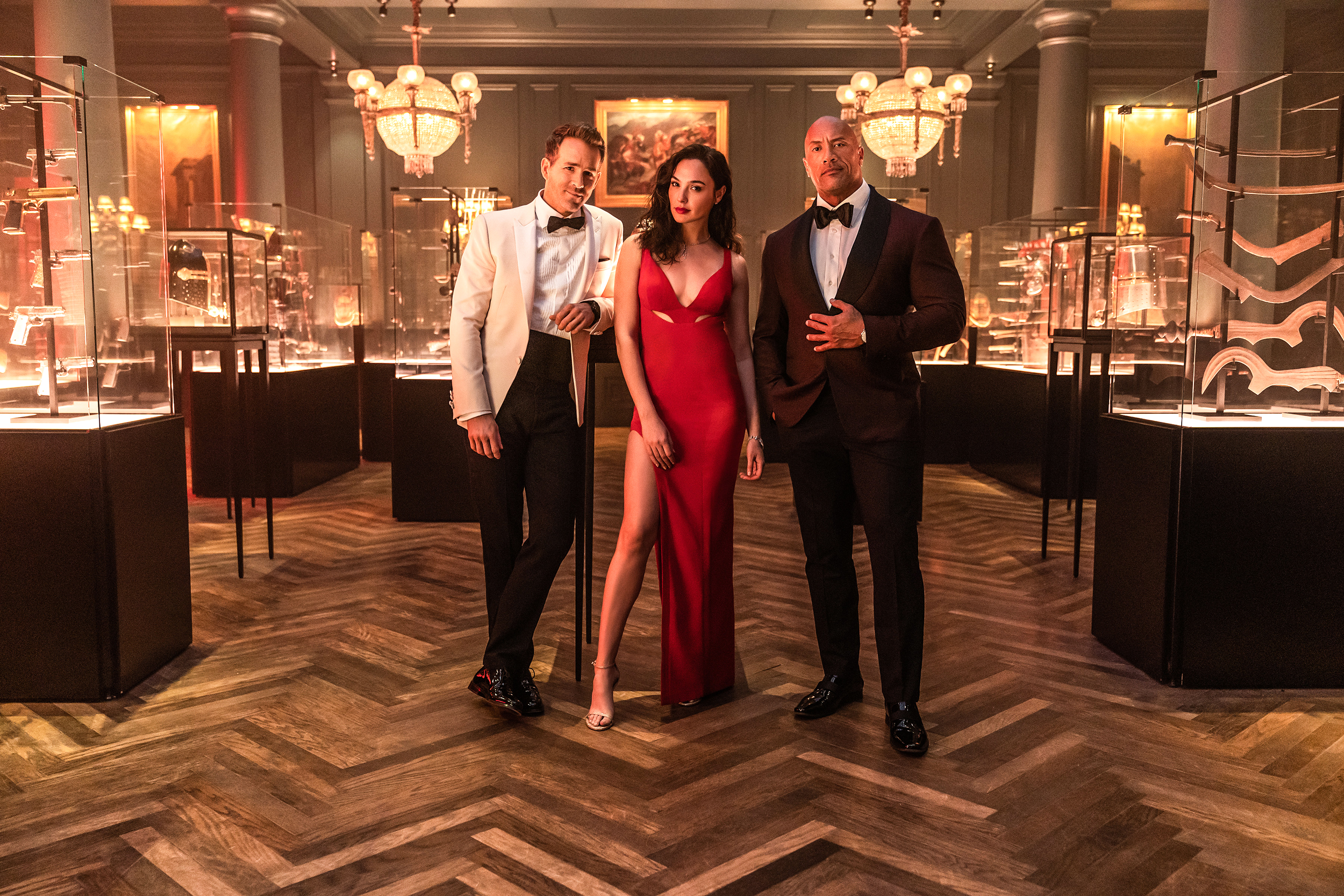 Early on in the Netflix thriller “Red Notice,” Interpol Inspector Urvashi Das (Ritu Arya) holds up one of the film’s three fabled eggs of Cleopatra and calls it a “priceless piece of ancient cultural whatnot.” She then throws it to the ground, shattering it. It’s not a real egg, but a fake substitute — as you’d expect, since you’re watching a movie, in which all the priceless valuables are props.

Con men, art dealers and movies are all obsessed with lies and truth and the space between the two.

Con men, art dealers and movies are all obsessed with lies and truth and the space between the two. Rawson Marshall Thurber’s clever script is a shell game of plot twists and head fakes which keeps daring you to notice, or care, that you’re watching a scam, a forgery and a fiction. It’s a shallow pleasure — but what can you expect from an art form that is constantly passing off plaster as gold?

“Red Notice” starts with FBI profiler John Hartley (Dwayne Johnson) pursuing art thief Nolan Booth (Ryan Reynolds) as he tries to steal three ancient Egyptian eggs supposedly given to Cleopatra. Hartley and Booth are both being targeted by another art thief, The Bishop (Gal Gadot), who through cleverer-than-thou machinations gets them sent to an Interpol black site. The narrative tangles and re-tangles from there, racing through masked balls, South American jungles, improbable bullfights, and various betrayals. Imposter eggs and imposter backstories proliferate, and everyone turns out to be someone other than who you thought they were.

In “Ocean’s 12,” part of the heist involved bringing a character played by Julia Roberts in to pretend to be Julia Roberts. “Red Notice” is similarly gleeful about the way the sham of moviemaking and the sham of cons overlap. In the first line of the movie, Inspector Das tells Hartley, “You’re not a cop,” to which he responds, “You’re right, I’m not.” Because, of course, he isn’t. He’s Dwayne Johnson, an actor playing a cop. (“You don’t look like a profiler,” another colleague observes. “I get that a lot,” says Johnson, who looks like a movie star.)

Other winks are even more blatant. The characters are constantly referencing other films. If they’re traveling, they’re talking about “Sullivan’s Travels.” If they’re looking at a watch, they’re talking about “Pulp Fiction.” They even work in a reference to “Cats,” for some reason. In that bullfight scene, Booth tells Hartley to stay still because bulls can only see you when you move — and then there’s an extended discussion about whether Booth got that information from a nature documentary or is misremembering “Jurassic Park.” Is it David Attenborough or Richard Attenborough? Movies and real life, who can tell them apart?

At one point, Booth critiques Bishop’s entrance; at another he offers to give notes on Hartley’s performance (or is it Johnson’s?) He says “scene!” at the end of scenes. He calls the egg they’re searching for a MacGuffin. The best grifters (and actors) make it a pleasure to participate in your own bamboozlement.

“Red Notice” absolutely revels in revealing the ersatz trash beneath its luxurious façade.

One of the most transparent frauds in the movie is the joke that the film cares about art. Antiquities and valuable objects in movies from “V for Vendetta” to “Raiders of the Lost Ark” are supposed to signify sophistication and elevation. Appreciating a big honking egg prop is supposed to show that the characters are glamorous, and you’re glamorous, too, for spending time with them. The expensive knickknacks are part of the accouterment of luxury and taste, like vintage cars (yes, the movie has one of those) and elegant gowns (many of which are draped over Gadot at various points.)

“Red Notice” absolutely revels in revealing the ersatz trash beneath its luxurious façade. Early on in the film, Hartley pours a soft drink onto an egg, and it dramatically dissolves into a bubbling puddle. Perhaps even more telling is a scene in which a minor character races right by the gorgeous jeweled eggs to fawn over Ed Sheeran (who boasts about having been in “Game of Thrones.”)

The movie knows what its audience wants, and it’s not hoity-toity connoisseurship or “an ancient piece of pricelessness.” Its cartoon violence (the bullfight looks like it’s out of “Looney Tunes”), snarky quips, pretty humans in snug outfits and explosions. Booth uses his smooth sangfroid not to tastefully choose the best art to appreciate or pilfer, but to dismantle a scaffold in the middle of a pitched fight. What’s the point of preternatural suavity if you can’t weaponize it for chaos and cheap laughs?

The fun sputters somewhat as the movie tries to resolve itself, and the sequel-telegraphing end feels decidedly forced. But that’s arguably part of the fun too. “Red Notice” is a lowest-common denominator star vehicle with fewer ambitions than your average Marvel Cinematic Universe slugfest. It picks up pretensions just to smash or dissolve them. No one would mistake it for great art. But it disavows any such aesthetic ambition with such sincere hucksterism that you start to wonder if there’s maybe a glimmer of cultural whatnot in amongst that false gold after all.

Noah Berlatsky is a freelance writer and critic in Chicago.