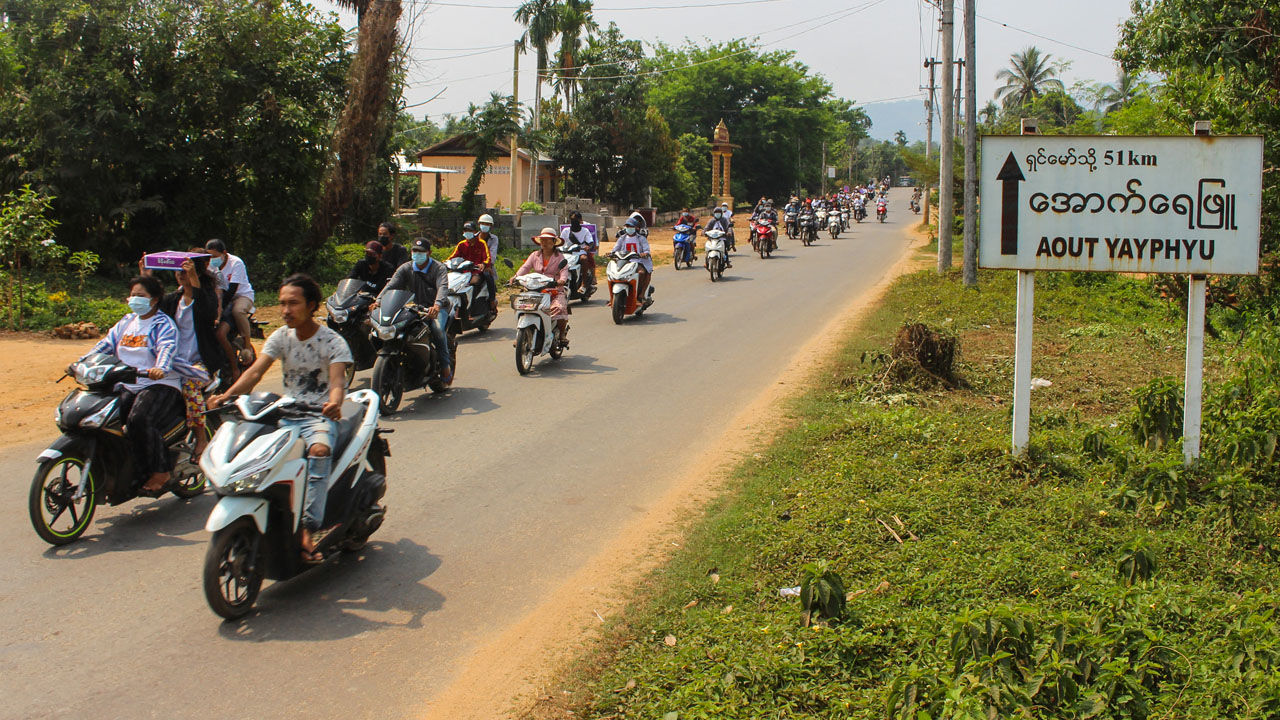 This handout photo taken and released by Dawei Watch on March 23, 2021 shows protesters riding their motorcycles during a demonstration against the military coup through various villages in Dawei. (Photo by Handout / DAWEI WATCH / AFP) /

Myanmar’s military on Tuesday said it was sad about people killed in its brutal crackdown on anti-coup protests, but vowed to press ahead with stamping out what it called “anarchy”.

The junta has unleashed deadly violence as it struggles to quell nationwide protests against the February 1 ousting of civilian leader Aung San Suu Kyi, drawing international condemnation and sanctions.

More than 260 people have been killed since nationwide protests erupted against the coup, according to a local monitoring group.

In a news conference in the capital Naypyidaw, junta spokesman Brigadier General Zaw Min Tun put the death toll at 164.

“I am sad because these violent terrorist people who died are our nationals,” he said.

The streets of towns and cities across the country have seen chaotic scenes for weeks as security forces clash with protesters demanding the restoration of democracy and the release of Suu Kyi.

The authorities have used tear gas, rubber bullets and live rounds to disperse protests, prompting a senior UN rights expert to warn they may be committing “crimes against humanity”.

Zaw Min Tun defended the response, saying the security forces were dealing with “insurgents holding weapons” and five police and four soldiers had been killed.

“We have to crack down on the anarchy. Which countries in the world accept anarchy?” he said.

Despite the bloodshed, protesters took to the streets again on Tuesday, staging dawn demonstrations in parts of the commercial capital Yangon.

As well as breaking up protests, the military has sought to stem the flow of news about the crackdown, banning several local media outlets and arresting dozens of journalists.

The country’s internet connection has also been throttled and mobile data services suspended.

EU, US sanctions
International pressure is building on the regime, with the European Union on Monday imposing sanctions on junta chief General Min Aung Hlaing and 10 other senior officials.

The bloc said that as commander-in-chief, Min Aung Hlaing was “directly responsible” for “serious human rights violations” carried out during the crackdown.

And Washington — which has already blacklisted the top junta leaders — sanctioned Myanmar’s police chief and an army special operations commander, saying they were responsible for using lethal force against demonstrators.

The US Treasury said that since Than Hlaing was made police chief and deputy home affairs minister on February 2, the police had engaged in “brutal acts of violence” against protesters.

Army commander Aung Soe was responsible for sending in troops to confront protesters using battlefield weapons and tactics, “demonstrating that lethal force is being used in a planned, premeditated and coordinated manner against the anti-coup protests,” the Treasury said.

But sanctions and the chorus of global condemnation have so far had little impact on the generals, who have shunned calls for restraint.

There are fears that Saturday — Myanmar’s Armed Forces Day, usually marked with a parade in Naypyidaw — could be a flashpoint.

There has been an exodus from the city — the former capital — with residents seeking safety elsewhere in the country, and warnings from embassies to foreign nationals.

The Australian embassy on Tuesday warned its citizens to prepare to “shelter in place” with essential supplies, while Myanmar’s former colonial ruler Britain has already advised its nationals to get out.

Neighbouring Thailand is bracing for a possible influx of tens of thousands of refugees if the situation worsens.

“This is insensitive” Rapper, Vector, called out for tweet he shared...