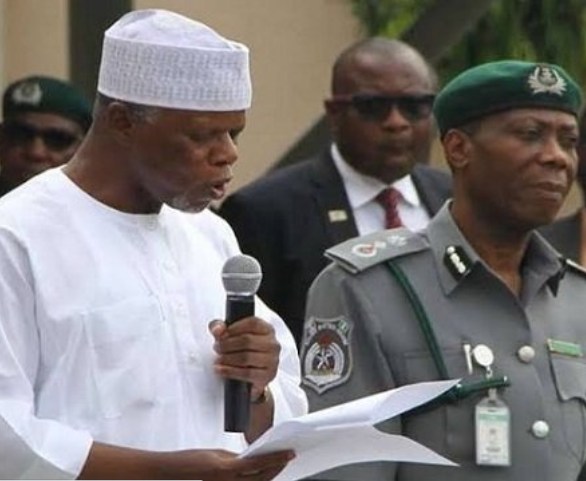 The Smiths Hiemann 2533 HCV machines, which were managed by a foreign company known as Cortena, have not been put to use since 2015 when the contract involving the company was revoked. The Nation reports.

The Controller of the Apapa Area Command of the Nigeria Customs Service, Mohammed Abba-Kura, told the House of Representatives Committee on Customs and Excise on an oversight visit to the Command that politics was brought into the issue of scanners sometimes in 2015.

According to him, the contract involving Cotecna was revoked and re-awarded to a Nigerian company known as Global Scan.

He said the company lacked the technical capacity to manage the scanners, adding that even the CIR issued by the company were the worst the Customs has ever worked with.

Abba-Kura said: “The issue of politics was brought into the scanning. Even the contract with the service providers, for so many years, Nigeria Customs Service was not part of it. If you want to do a project, you must bring stakeholders to be part of that project because once they are part of it, it will be a success story and a win, win situation.

“Cotecna is one of the service providers that did very well. They were the ones that installed the fixed scanners and mobile scanners in both Tincan and Apapa ports and they did very well managing them and a lot of officers were trained. Many of us benefited from that training.

“But for political reasons, sometimes in 2015, the one in Apapa was taken away from Cotecna and given to a Nigerian, Global Scan owned by Sir Emeka Offor. He does not have the capacity to manage it. Even the CIR he was issuing at that time was the worst CIR we have worked with.

“Some of us were privileged to be taken abroad to visit some other ports. But the fixed scanners we have here were more advanced than the ones we have in the Port of Doha.

“We have some of the best officers trained in the use of these scanners. Some of us sent over one and half year attending those training. So, if the scanners are functioning, we will reduce man hour sent on examination.

“We will generate more revenue and we will discover so many things that are prohibited. But there is nothing that we can do right now because there are laws that must be followed.

“If money is budgeted and not released, you should be able to know why the money was not released and whoever is responsible should be sanctioned so that others should sit up and do thing properly.”

Members of the Committee expressed displeasure over the abandonment of the scanners which cost the country several millions of dollars.

Vice Chairman of the Committee, Leke Abejide, said: “We have just gone round to see both the mobile and fixed scanning machines. They are in a moribund state. Nothing is happening there.

“There is the need for us to investigate deeply into the activities of the era of scanning and see how we can come up with a solution to help the system so that their job can be easier and they can generate more revenue. As it is now, nothing is moving here in the port.

“Look at the access road to the port, a place the government is getting N40 billion per month. I don’t think the construction of this road will take N40 billion.

“Politics was allowed to come in when it was taken from Cotecna and given to Global Scan even when Cotecna is higher in terms of capacity, knowledge and innovation. When that politics came in, it crippled the system.

“As a parliament, we will investigate it and come out with a solution. We will work the Customs and all stakeholders to advice government on the best way forward.”

A visit to the site by the Committee revealed long years of abandonment of the facilities which are already decaying.