Morocco’s forward Sofiane Boufal (L) celebrates after scoring a goal during the Africa Cup of Nations (CAN) 2021 football match between Morrocco and Ghana at Ahmadou-Ahidjoe stadium in Yaounde, on January 10, 2022. Kenzo Tribouillard / AFP

Morocco began their quest at the 2021 Africa Cup of Nations (AFCON) with a 1-0 win over Ghana at the Ahmadou-Ahidjoe Stadium in Yaounde on Monday.

Forward Sofiane Boufal scored in the 83rd minute to hand the Atlas Lions their first win at the biennial football tournament in Cameroon.

The Moroccans dominated much of the Group C encounter but could not find a way through. But Boufal, the Angers man, pounced onto a loose ball and fired his nation into the lead. The North Africans were able to hold on for the rest of the game.

With the win, Morocco now sit top of the group pending the outcome of the game between Gabon and Comoros.

Read Also: [PHOTOS] One Year After Postponement, AFCON 2021 Kicks Off 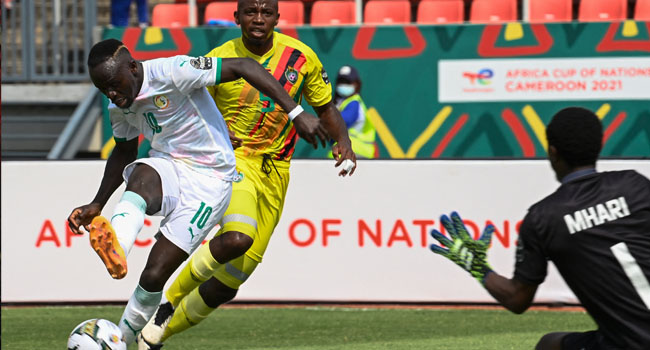 Senegal’s forward Sadio Mane (L) shoots and fails to score as Zimbabwe’s goalkeeper Petros Mhari (R) prepares to make a save during the Group B Africa Cup of Nations (CAN) 2021 football match between Senegal and Zimbabwe at Stade de Kouekong in Bafoussam on January 10, 2022.
Pius Utomi EKPEI / AFP

Earlier in the day, Sadio Mane gave Senegal a late win over Zimbabwe in a Group B clash.

Disaster struck the gallant underdogs when a shot hit the right arm of Kelvin Madzongwe and Mane sent goalkeeper Petros Mhari the wrong way with the resulting penalty on 97 minutes to settle a lacklustre affair.

While Senegal, one of the favourites to win a competition delayed by Covid-19, dominated possession, they rarely threatened to break down a well-organised Zimbabwe defence.

“It was difficult playing in such hot conditions and not having an opportunity to play any warm-up matches affected us,” said Mane.

“We left it very late to score, but the most important issue was to secure maximum points and we achieved that. Now we must try to perform better against Guinea.”

A Nazi officer’s housekeeper hid 12 Jews in the basement. All of them made it out alive.

A Nazi officer’s housekeeper hid 12 Jews in the basement. All...