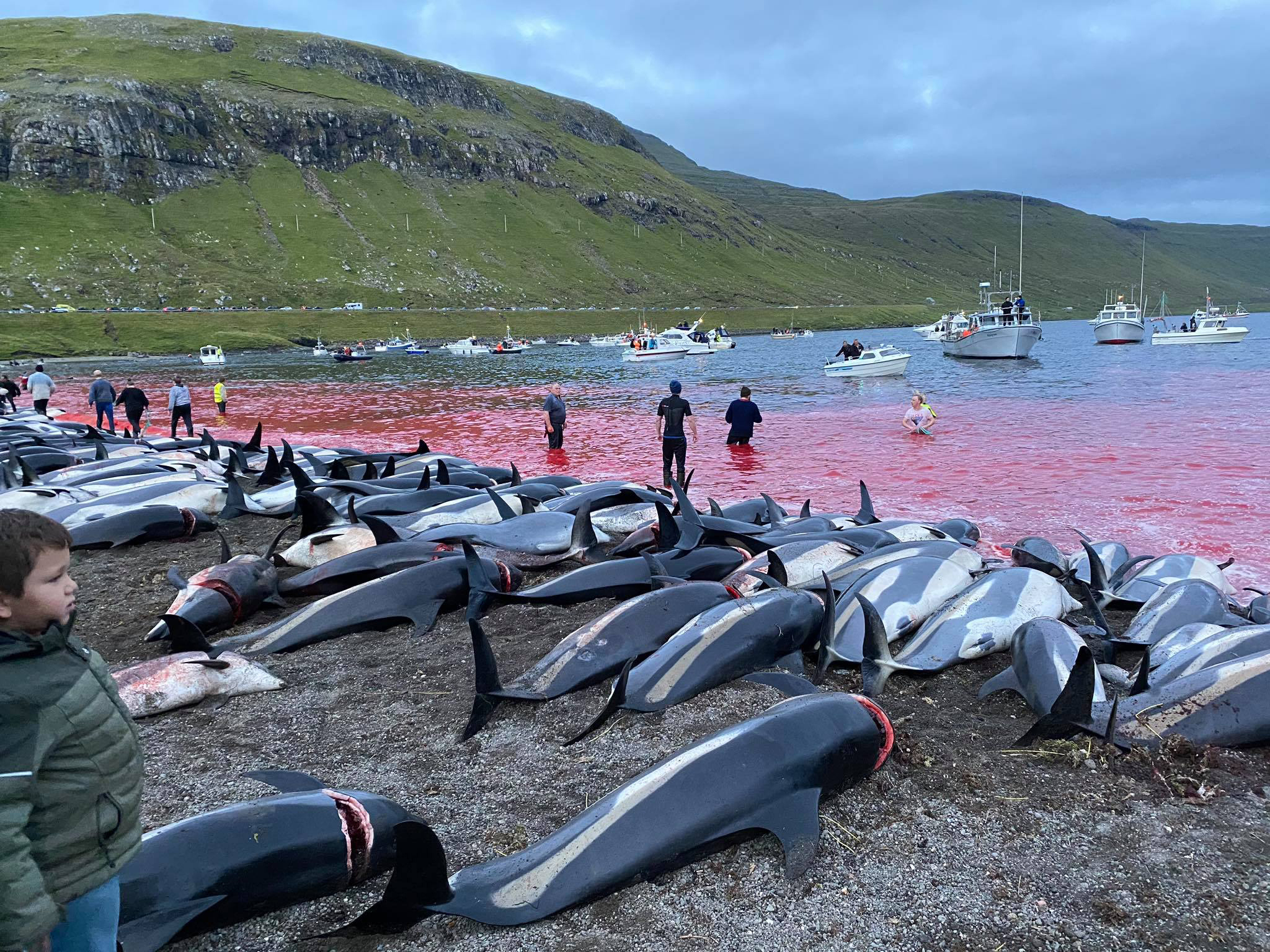 Dolphin hunting is a centuries-old practice in the Faroe Islands.

But the tradition is facing fresh scrutiny after more than 1,400 of the aquatic mammals were killed Sunday in a record-breaking slaughter that has sparked outcry among local residents and global environmental groups.

The hunt in the North Atlantic islands is not done for commercial purposes and is authorized by the government, but even those who support the practice expressed concern this year’s event could prompt greater scrutiny.

For hundreds of years, residents of the Faroe Islands have participated in the annual hunting tradition, which is known as the “Grind,” or Grindadráp in Faroese. It sees pilot whales, the second largest species of dolphin following the orca, and other dolphins corralled into fjords before being stabbed to death.

The remote island’s tradition was brought to global audiences in the Netflix documentary ‘Seaspiracy’ earlier this year.

According to the Faroese government, the practice is “fully regulated” and considered “sustainable,” with around 600 pilot whales and 250 white-sided dolphins caught on average each year over the past two decades.

Sunday’s catch blew past that average, however, with the Seattle-based Sea Shepherd Conservation Society estimating that at least 1,428 white-sided dolphins were killed in what the organization branded a “cruel and unnecessary hunt.”

“Considering the times we are in, with a global pandemic and the world coming to a halt, it’s absolutely appalling to see an attack on nature of this scale in the Faroe Islands,” Captain Alex Cornelissen, Sea Shepherd Global CEO, said in a statement.

“If we have learned anything from this pandemic is that we have to live in harmony with nature instead of wiping it out.”

Animal rights organization People for the Ethical Treatment of Animals, or PETA, has long called for an end to the “bloody whale slaughter” on the Faroe Islands.

Bjarni Mikkelsen, a marine biologist from the Faroe Islands, told NBC News the catch represented the largest number of dolphins to be killed in a single day in the Faroe Islands. Prior to that, he said the highest number had been 1,200 in 1940.

Traditionally, Mikkelsen said, the Grindadráp is “very well-organized and when the drive happens, there are enough people on the beach that it’s very seldom that a harvest lasts longer than 10 minutes.”

On Sunday, he said, the slaughter lasted for just under an hour, leading to disturbing scenes on the shore that left local residents shaken.

The marine biologist said he believed hunters were not prepared for the significantly large school of white-sided dolphins they encountered, with Faroese hunts typically focused on pilot whales, which are larger and thus provide more meat.

Páll Nolsøe, a spokesperson for the Faroese government’s Ministry of Foreign Affairs and Culture, acknowledged that Sunday’s catch was “exceptionally large.” And, he said Wednesday, “there is no doubt that the whale hunts are a dramatic sight to people unfamiliar to the hunts.”

However, Nolsøe maintained that even Sunday’s catch would be considered sustainable by the Faroese government, with the hunting practice helping to sustain communities through locally-sourced means.

“It’s very important to understand that the basis of whaling in the Faroe Islands is to provide food,” he said. “The meat is distributed among the participants…and also to local communities.”

Further, he noted that the whale drives have taken place in the Faroe Islands “since the Viking age,” so the “Grind” is considered by many to be an important part of the Faroese cultural identity and heritage.

Mikkelsen said that “all of the meat” from Sunday’s drive was distributed to local communities in the Faroe Islands. “That’s a positive thing at least,” he said.

However, he said he believes the weekend incident at the very least highlights the need for regulations around how many dolphins can be killed each year, as well as within a single drive.

Nolsøe said that while those who participate in the Grind are required to obtain permission from local authorities and are subject to animal welfare regulations requiring animals to be killed “as quickly and efficiently as possible,” there are currently no rules in place around how many dolphins can be slaughtered.

As the fallout from Sunday’s hunt continues, he said, that could soon be up for discussion.