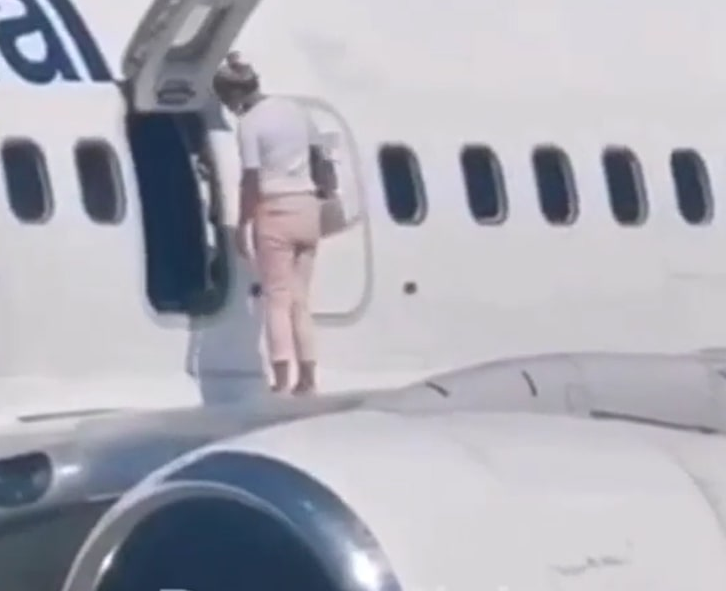 A mother-of-two has reportedly been blacklisted from flying after she was captured on video strolling along an airplane wing.

In the video, the Ukrainian mum is seen using the emergency exit to access the wing to “get some air” because she was “too hot”, according to reports.

She can be seen sitting beside the engine and relaxing out for a bit, before eventually wandering back into the cabin.

The Ukraine International Airlines 737 had just touched down at Kiev’s Boryspil Airport from the Turkish city of Antalya and had taxied from the runway to the terminal to wait for passengers to deplane. But the woman got tired of waiting.

According to The Sun, the woman, who was travelling with her husband and two children, didn’t even have that much longer to wait, as almost everyone had disembarked.

“The aircraft landed and almost all the passengers got off,” one fellow passenger told reporters. “She walked almost all the way from the tail to the emergency exit row, opened the door and went out.”

“By that time her two children were outside the plane and standing right next to me. They were surprised, saying: ‘that’s our mum!'”

The pilot sounded the alarm, and police, ambulance and border guards were summoned.

The passenger was tested for both drugs and alcohol, but had neither in her system.

When questioned by police, she told them she was “too hot”.

The airline confirmed the incident, adding the woman was now blacklisted.

“A passenger of flight PS6212 Antalya-Kyiv illegally opened the emergency exit of the plane after it stopped near gate 11 of terminal D and went on to its wing,” it said.

“The passenger was flying on a charter vacation with her husband and children.

“The passenger was blacklisted for gross violation of aviation safety rules and behavior on board.”