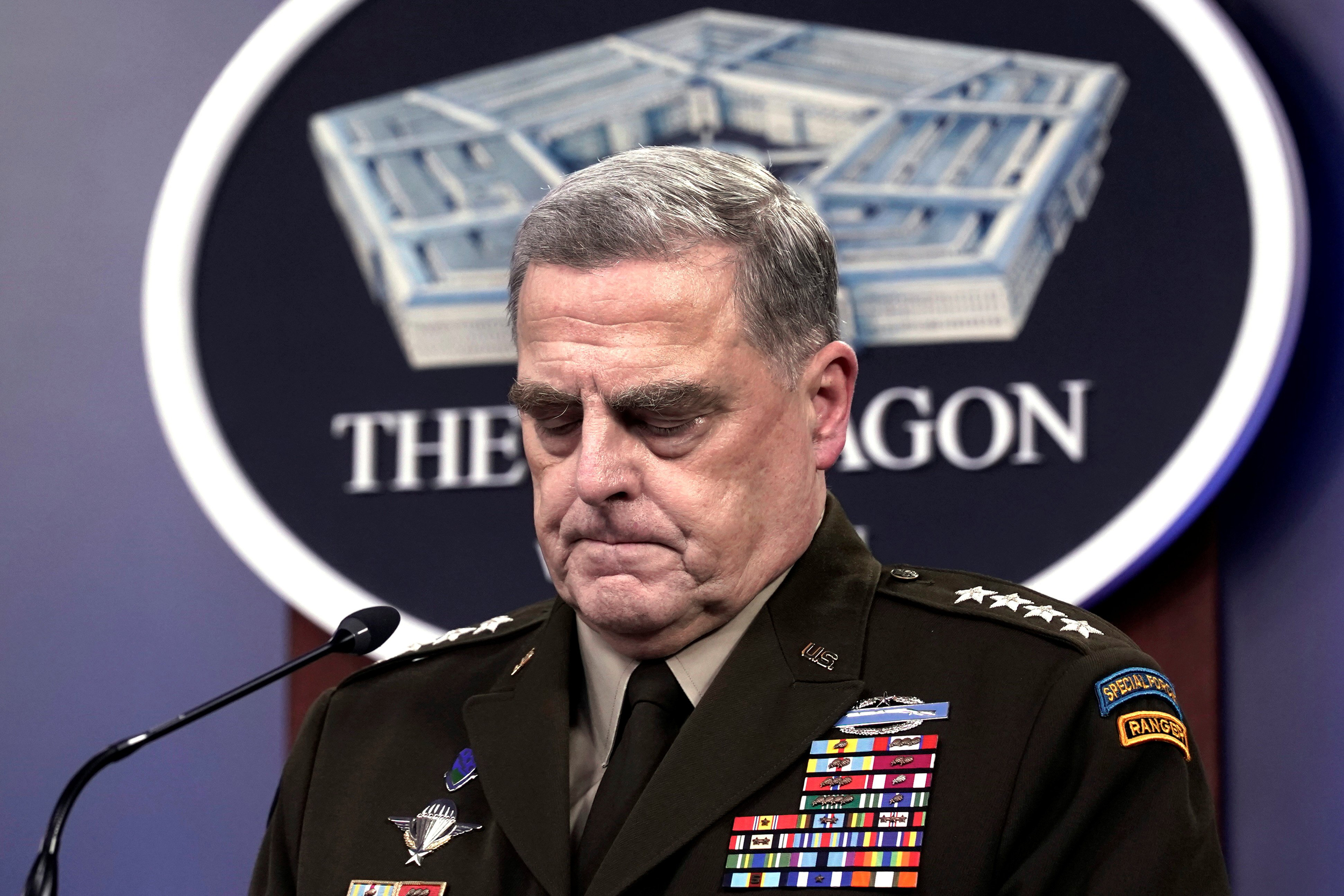 The office of Chairman of the Joint Chiefs of Staff Gen. Mark Milley defended him Wednesday after former President Donald Trump accused Milley of “treason” for calling a Chinese military official last year, as reported in a new book.

Separately, President Joe Biden said he has “great confidence” in Milley when asked about the report.

Trump criticized Milley on Tuesday following the release of a portion of “Peril,” a book by The Washington Post’s Bob Woodward and Robert Costa, which reported that Milley told his Chinese counterpart before the presidential election last year that he would warn him beforehand of any attack by the U.S.

U.S. intelligence agencies at the time warned that Chinese military officials were concerned Trump might launch an attack to bolster his campaign, according to the book.

“For the record, I never even thought of attacking China — and China knows that,” Trump said in his statement, in which he also called Milley “weak and ineffective.”

The authors also reported that Milley took steps to make sure proper protocols for the U.S. nuclear arsenal were followed in the days after Trump supporters stormed the U.S. Capitol on Jan. 6 in an effort to halt the electoral vote count.

In a statement Wednesday, Joint Staff spokesperson Col. Dave Butler suggested that there had been nothing improper about Milley’s actions.

“General Milley continues to act and advise within his authority in the lawful tradition of civilian control of the military and his oath to the Constitution,” Butler said.

He said the chairman “regularly communicates” with his counterparts around the world, “including with China and Russia. These conversations remain vital to improving mutual understanding of U.S. national security interests, reducing tensions, providing clarity and avoiding unintended consequences or conflict.”

“His calls with the Chinese and others in October and January were in keeping with these duties and responsibilities conveying reassurance in order to maintain strategic stability,” Butler said, adding that the “meeting regarding nuclear weapons protocols was to remind uniformed leaders in the Pentagon of the long-established and robust procedures in light of media reporting on the subject.”

Trump’s former national security adviser John Bolton backed Milley, calling him “a staunch supporter of the Constitution and the rule of law. His patriotism is unquestioned.”

“In the days after Donald Trump’s November 3, 2020, election defeat, I can only imagine the pressures he and others were under in fulfilling their Constitutional obligations,” he said in a statement.

After the account from “Peril” was reported Tuesday, Sen. Marco Rubio, R-Fla., called on Biden to fire Milley, saying his actions “demonstrate a clear lack of sound judgement.” Other Republicans lawmakers had previously called on Milley to resign over the U.S. withdrawal from Afghanistan.

In a briefing Wednesday, White House press secretary Jen Psaki said she would not speak about the “anonymous unconfirmed reports” in the book, but suggested Milley is not going anywhere.

“What I can assure you all of is that the president knows Gen. Milley, he has been chairman of the Joint Chiefs for almost eight months of his presidency, they’ve worked side by side through a range of international events, and the president has complete confidence in his leadership, his patriotism and his fidelity to our Constitution.”

Psaki also offered what she called “key context” around the timing of Milley’s reported actions.

“The outgoing president of the United States during this period of time fomented unrest, leading to an insurrection and an attack on our nation’s capital on January 6th,” she said. “Beyond reports in this book, there’s been widespread reporting and commentary from members of his own Cabinet, the former president’s Cabinet I should say, including high ranking national security officials, questioning the former president’s stability, his behavior and his suitability to oversee the national security of the United States.”

JUST IN: R Kelly Found Guilty Of Sex Trafficking, Others