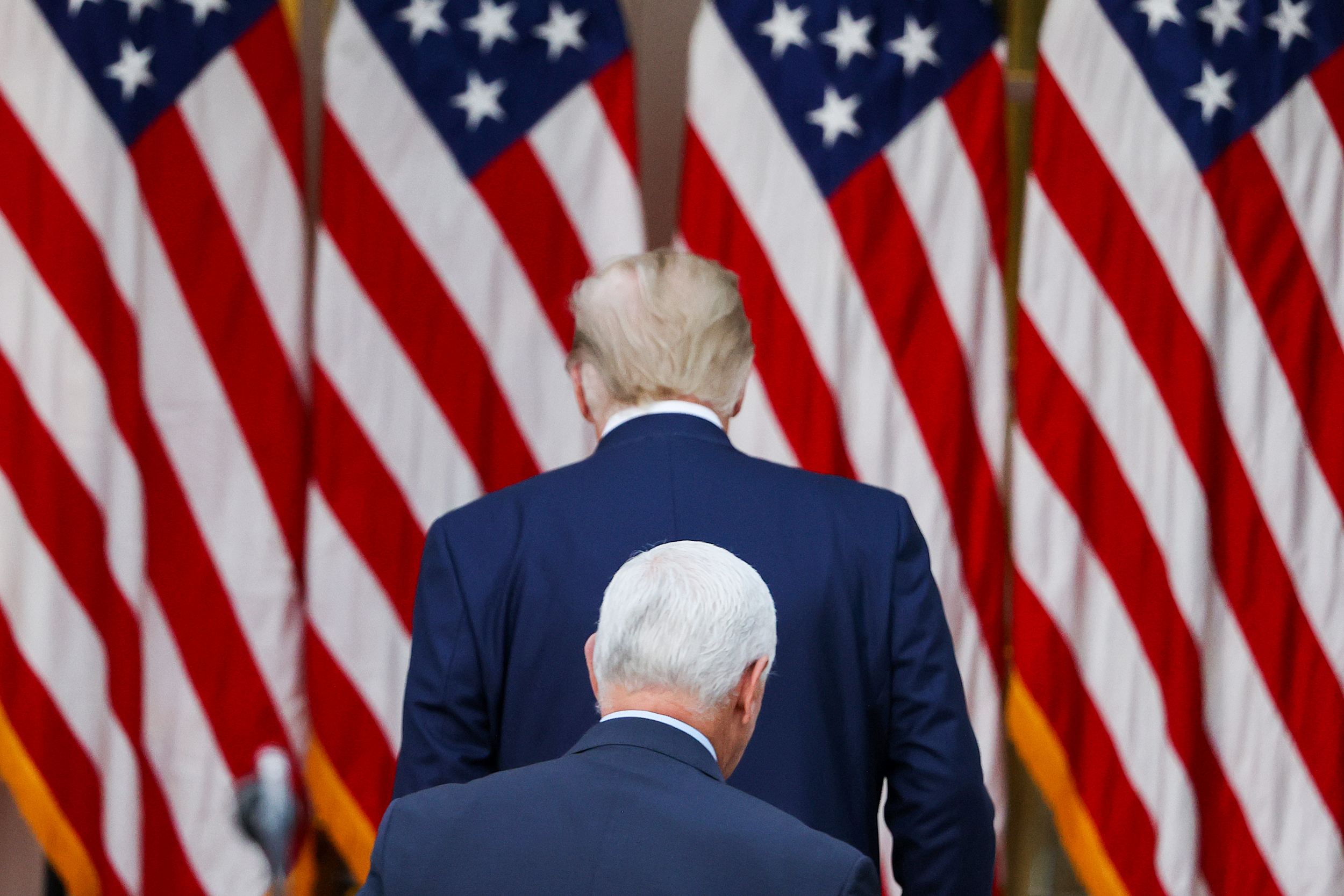 There’s a lot of talk of former Vice President Mike Pence and 2024. From his speeches and appearances, it seems like he still thinks he has a chance to become president of the United States. Perhaps, anything is possible. But likely? Let’s be honest, my cat, Tiki, has a better chance of becoming president than Pence.

Before Donald Trump destroyed all sense of political norms, it was conventional wisdom that sitting or former vice presidents tend to become their respective party’s nominee for president if they run for it. This has been the case, with few exceptions, since 1948. But there’s nothing conventional about the political times we’re in or Pence’s pathway to the GOP nomination.

You can add Pence’s political career right on top of the ash heap alongside constitutional, democratic and institutional norms.

Political norms aren’t the only things left in tatters in Trump’s destructive wake. You can add Pence’s political career right on top of the ash heap alongside constitutional, democratic and institutional norms. Why? He committed a cardinal sin by today’s GOP standards: He rebuked Trump and did so publicly.

Watching him as Trump’s vice president was infuriating. It was one of the most cringeworthy, dysfunctional relationships in political history. And what did he get from it? More scorn and ridicule from the defeated former president and his followers.

For over four years, there was no act of obsequiousness too servile, no indignity too low for Pence to willingly endure in his quest to prove his undying loyalty to Trump. But in one act of constitutional adherence Jan. 6, after refusing to overturn the 2020 presidential election results, the loyal lieutenant became persona non grata not only to the man he served, but to his millions of dedicated MAGA followers. Unfortunately for Pence, there is no viable path to the GOP nomination without them.

Jan. 6 was Pence’s first high-profile act of public defiance against his boss but surprisingly not his last. During his recent Federalist Society speech, he unequivocally rebuked Trump for his repeated claims that Pence had the authority to reject certification of Joe Biden’s win. Pence went so far as to call it not only “wrong” but also “un-American.” Cue the gasps from the golf course at Mar-a-Lago and the headquarters of the Republican National Committee.

He finally stated the obvious. As he received bipartisan praise for his comments, I couldn’t help but think, “It took him 13 months to say this? The Trump incited mob chanted ‘Hang Mike Pence, ‘ for goodness’ sake.”

Yes, Pence ultimately did the right thing, despite the tremendous pressure from his boss at the time. But upholding his oath to the Constitution by certifying the election was what he was supposed to do. He isn’t exactly a profile in political courage. He gets no gold star from me. And he shouldn’t get one from the millions of Americans who watched the violent insurrection live or have seen the hundreds of hours of documented video evidence of that disgraceful day, especially when according to Bob Woodward and Robert Costa’s book “Peril,” Pence called former Vice President Dan Quayle to see what his options were to give into Trump’s demands.

It looks like he won’t be receiving a gold star from the RNC either. Let’s remember that the RNC controls the party’s presidential primary and the nominating convention. On the same day Pence rebuked Trump over Jan. 6, the committee voted to approve a resolution that claimed Jan. 6 was simply “ordinary citizens engaging in legitimate political discourse” and censured the two Republican members of Congress on the committee tasked to investigate it all. Pence’s comments were in direct contrast. In today’s GOP, that’s tantamount to heresy.

There’s no question about what happened that day. Or that the violent mob targeted the vice president. We all heard the chants. We all saw the makeshift gallows set up on the West Lawn of the Capitol. We all saw the horrific scenes of law enforcement officers being brutally attacked. The GOP’s attempted whitewashing of history is beyond Orwellian. Its hypocritical rationalizations of it all are beyond reprehensible. So much for the law and order, “Back the Blue” party platform.

To the MAGA world, he is as much of a traitor as the Never Trumpers for not going along with the “big lie.”

For most elected officials, adhering to their constitutional duty in the aftermath of a violent insurrection intended to overturn a free and fair presidential election, would be a badge of valor. Yet, Pence has tried to downplay Jan. 6 in the past for fear of upsetting Trump and his supporters. Remember when he told Fox News’ Sean Hannity in October that “I know the media wants to distract from the Biden administration’s failed agenda by focusing on one day in January.”

With all of the damning evidence coming out about Jan. 6, maybe now Pence thinks he has enough political cover to finally speak more forcefully about the implications of that day. History books will be written, and I suspect he wants to be remembered for being on the right side of the Constitution and democracy. But in the psyche of Trump’s Republican Party, Pence is considered the apostate. To the MAGA world, he is as much of a traitor as the Never Trumpers for not going along with the “big lie.” Welcome to the resistance, Pence. OK, maybe not quite.

Although recent polling has shown a decline in Republican support for Trump running in 2024, he’s still the overwhelming favorite. However, it’s Florida governor and firebrand Ron DeSantis who seemingly benefits from this decline, not Pence. Unlike the former vice president, DeSantis has the advantage of being the governor of an electorally significant state. He’s a Fox News media darling. Unlike Pence, he’s considered a fighter, not a groveler. This has earned him the reputation in many GOP circles of being a more palatable torchbearer of the rough and tumble brand of Trumpism now dominating the GOP.

There’s a reason DeSantis is a featured speaker at the upcoming CPAC conference, which will also feature Trump, and Pence isn’t. In past years, he’s been a sought-after speaker. In fact, last year, when Pence rejected CPAC’s invitation (remember that was a month after the Capitol attack), it was reported that the conference’s organizers were trying to change his mind. What a difference a year makes.

CPAC is a must-stop for most viable GOP presidential hopefuls. The big-name speakers have already been announced, and Pence is curiously absent. It appears he can’t even garner an invite to CPAC in 2022, so what makes him (or any of his supporters) think he has any chance at the nomination, never mind the presidency?

DeSantis’ 2024 ambitions haven’t gone unnoticed by the Trump world. It’s just a matter of time before the former president tries to vanquish him too. As we all know, loyalty is a one-way street with Trump. Just ask Pence.

Tara Setmayer is a resident scholar at the University of Virginia Center for Politics, and a senior adviser at The Lincoln Project. She is a former GOP congressional communications director.