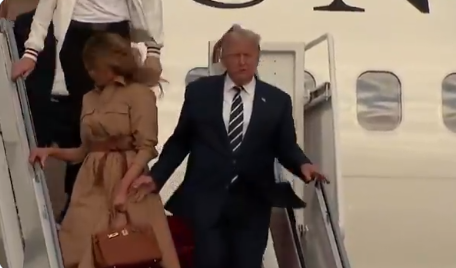 The couple and their son Barron Trump were spotted stepping down from Air Force One at Joint Base Andrews in Washington after flying in from Bedminster, New Jersey.

As the president and the first lady made their way down the stairs, Trump attempted to hold Melania’s hand twice, but the First lady resisted holding his hand as she tightly clutched onto her $13K camel-colored Hermès Birkin bag.

This is not the first time Melania has refused not to hold her husband’s hand in public. On May 22, 2017, Melanie refused to hold Trump’s hand after they landed at Ben Gurion International Airport in Israel

On January 13, 2020, the former model pulled her hand out of her husband’s hand while attending a College Football Championship in New Orleans.

Why Buhari Sacked Service Chiefs And Appointed New Ones – Presidency

SUNDAY IGBOHO AND THE SOUR GRAPES: A Letter To Lady Olamide...