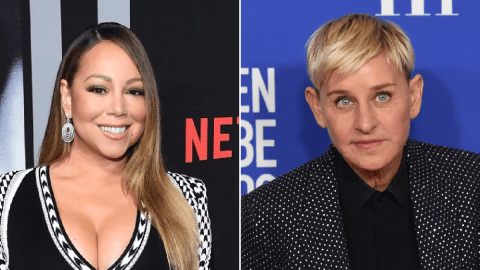 Grammy award winning singer, Mariah Carey, has recalled how she felt ‘extremely uncomfortable’ during a 2008 interview with Ellen DeGeneres in which the talk show host forced her to confirm she was pregnant.

Back then, Mariah appeared on the Ellen DeGeneres Show amid speculation she was expecting a baby with then-husband Nick Cannon.

During the interview, Mariah said that she ‘didn’t want to discuss’ the rumours but Ellen then presented her with champagne so they could ‘toast’ to her not being pregnant.

When Ellen noticed that the Grammy-winning singer pretended to sip the alcohol, she exclaimed: ‘You are pregnant!’

According to Mariah that incident was uncalled for even though Mariah at the time was indeed expecting a baby.  Sadly, she miscarried shortly after.

Reflecting on the interview now, Mariah told Vulture: ‘I was extremely uncomfortable with that moment is all I can say. And I really have had a hard time grappling with the aftermath.’

Explaining why she was reluctant to share the news on the Ellen show, Mariah added: ‘I wasn’t ready to tell anyone because I had had a miscarriage.’

Mariah’s comments come weeks after Ellen’s show was accused of having a toxic environment behind the scenes.

She then referred to the scrutiny currently surrounding Ellen and stated:

‘I don’t want to throw anyone that’s already being thrown under any proverbial bus, but I didn’t enjoy that moment.’  ‘[There’s] an empathy that can be applied to those moments that I would have liked to have been implemented. But what am I supposed to do? It’s like, [sings] “What are you going to do?”’ Mariah added.

How to Withdraw PayPal Funds to Nigeria Bank Account

Only God Can Give Nigeria Victory Over Insecurity