Manchester United forward Marcus Rashford may have just let slip that his side are on the cusp of signing England team-mate Jadon Sancho.

The Red Devils have tracked Sancho for the last two years and failed with a pursuit to sign him last summer, when Dortmund were demanding around £108million.

However, the Germans have since lowered their asking price and United are confident of signing Sancho for a fee of around £85m.

Though the move feels a formality now, Sancho wants to finish his involvement with England at the European Championships before moving to Old Trafford and United fans will be forced to wait that bit longer to finally see the playmaker in a red shirt.

But while the agonising wait goes on, it looks like it’s only a matter of time as Rashford was dropping hints on his Twitter page after England’s morale-boosting win against Germany.

The forward first responded to a fan’s plea to ‘announce Sancho’ by saying that he can’t do it ‘just yet’, with Rashford later deleting the response.

But a bigger hint came shortly afterwards when Rashford replied ‘yes’ to a fan, who asked him to confirm a move for the Dortmund ace. 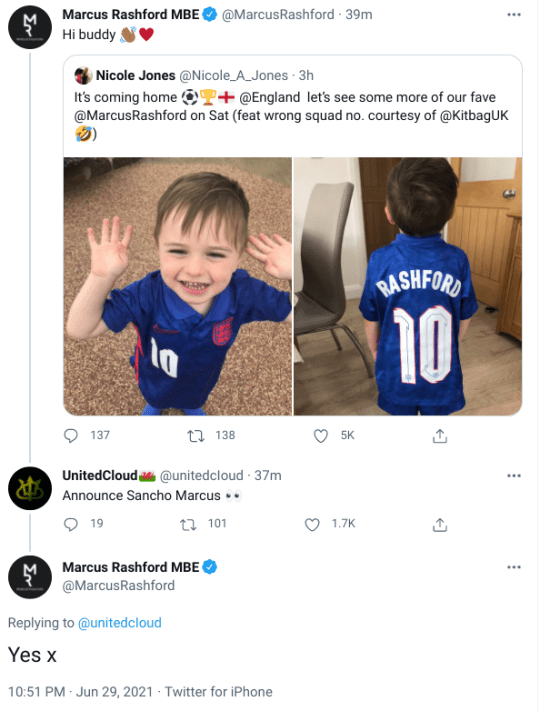 Sancho has barely featured for England at the tournament, with Gareth Southgate keen to protect him given the level of speculation.

The winger was devastated to be denied a move to Old Trafford last summer but he’s set to get his wish this time around, with Sancho set to be handed a five-year deal worth around £250,000-a-week.


For more stories like this, check our sport page

BBNaija season 6: My husband permits me to catch cruise with male housemates – Tega